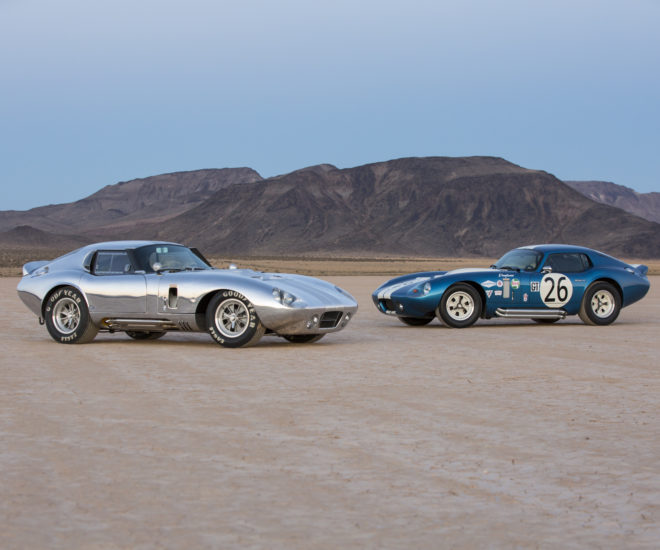 The Shelby Cobra Daytona Coupe was built to embarrass the Ferrari 250 GTO — and between 1964 and 1965, that’s exactly what it did.

It won its class at Le Mans in 1964, and in 1965 won the FIA Sports Car Championship, becoming the first and only American team to do so.

Each of the new cars will feature an aluminum or fiberglass shell and will stick as closely as possible to the original design and features that made the Daytona so formidable. However even if most of these anniversary editions end up in collections sitting in air-conditioned garages, Shelby is building them to be raced and so will be integrating a handful of safety and performance improvements — racing technology and safety regulations have come a long way since 1965.

The cars will get modern disc brakes and a stronger frame but will still have a simple yet premium leather interior and wood-rimmed steering wheel and as for suspension, will still use good old-fashioned leaf springs.

“We spent the last year carefully planning an aluminum car that is faithful to the six built during the 1960s. In addition, we developed an anniversary edition fiberglass version that is true to the spirit of the Coupe, but reimagined as if it had remained in production over the years,” said Keith Belair, Shelby American Chief Operating Officer

Only six Daytona Coupés were built and each one is what’s known in the trade as a ‘dead man’s car.’ Its current owner will have to pass away before there’s any chance of it coming up for sale. That, and the fact that they’re worth millions of dollars means that getting hold of an original is pretty much impossible.

“Now for a limited time, a few more people will be able to enjoy a Shelby Cobra Daytona Coupe,” said Conway. “This is a rare opportunity to snag a piece of performance history.”

An aluminum Coupé will cost $349,995, while its fiberglass brethren will start at $179,995. However, regardless of material, each car is a “component vehicle” meaning that it is down to the individual client to specify finish. That includes the engine. Neither of the above prices includes a powertrain.