Rolls Royce gets the world’s most expensive hood ornament

The New York International Auto Show at the Jacob Javits Center features a stunning Rolls-Royce motorcar mascot designed by a Manhattan-based jeweler. The mascot, known as the Spirit of Ecstasy, sits on every Rolls-Royce coming out of the factory. A one-of-a-kind mascot was commissioned by local luxury car dealership Manhattan Motorcars. Designer Jean Kemanjian described […] 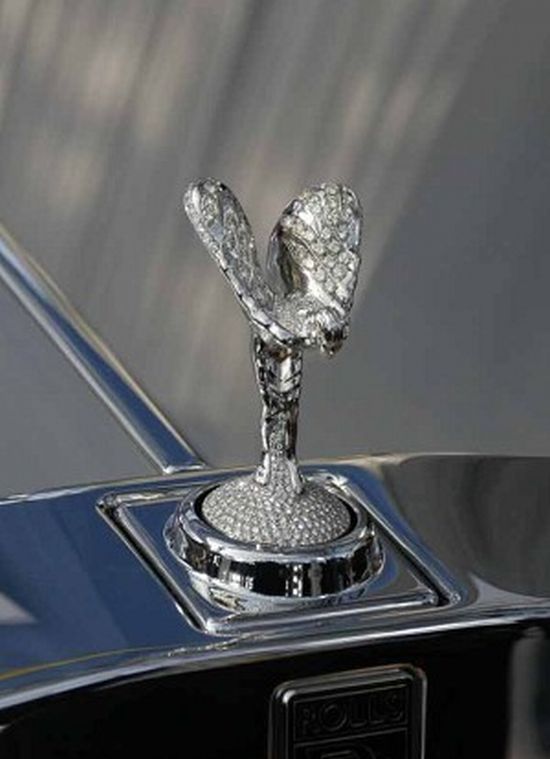 The mascot, known as the Spirit of Ecstasy, sits on every Rolls-Royce coming out of the factory. A one-of-a-kind mascot was commissioned by local luxury car dealership Manhattan Motorcars.

Designer Jean Kemanjian described his creation, valued at $200,000, and the design process. Four inches high by two inches across, the mascot is original to the car. “What inspired me was using the materials we usedâ€”the diamonds, platinum, and rare metals. We felt that doing something like this would be a tribute to the car itself.”

Diamonds clearly define the work. “It wasn’t too hard to come up with an idea to add diamonds to a vehicle,” said Kemanjian. “That’s never been done before.” On such a delicate piece, jewels glow from every fold and indentation. “What we did was to add 150 carats of D color VVS1 quality diamonds and some fancy intense yellow diamonds on the wings.”

The skill of the jeweler comes into play at the base. According to Kemanjian, “Pave (pah-vay) is a technique that we use to actually create the surface, which is actually a diamond surface. What you’re looking at is actually diamond after diamond. It’s like laying down tiles. It’s the most expensive surface you can create known to man.”

Based on a sculpture of a woman in fluttering robes by Charles Robinson Sykes, the mascot has adorned the hoods of Rolls-Royce motorcars since 1911. The mascot is commonly known as “Silver Lady” or “Flying Lady.” (The figure is an interpretation of the 3rd-century B.C. Greek sculpture, the Nike of Samothrace, a Greek symbol of victory.)

Kemanjian stated his diamond-studded mascot is exclusive to Manhattan Motorcars. “This is what Rolls-Royce base their whole emblem on. This goes on every car but without the diamonds. This is the only one in existence,”

Although he designed the prototype for the New York dealership, he is quick to point out that the car itself is all Rolls. “The whole car is original, from top to bottom. This is the original mascot that comes with the car. There’s no after market, there’s nothing added to the car. This is all original Rolls-Royce.”

Kemanjian indicated that everything is done by handâ€”the polishing, placementâ€”and the designer says these diamonds are really forever. “Diamonds are the hardest surface in the world. They’ll never scratch, they’ll never rust. This will stay like this for eternity.”

For more information on the motorcar mascot visit manhattanmotorcars.com and Jean Kemanjian’s other jewelry creations at oisdiamond.com. Via epochtimes