The MP4-X may only be a concept but nevertheless it’s one that gives a clear idea of what is already on its way to becoming an automotive possibility. 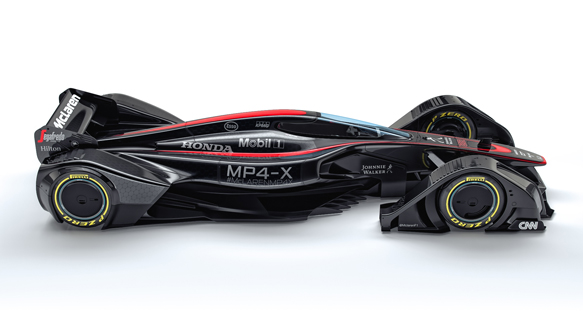 So you think you can race? Automaker McLaren has the perfect concept in mind for you. The MP4-X may only be a concept, but nevertheless it’s one that gives a clear idea of what is already on its way to becoming an automotive possibility. And in McLaren’s view in the future, simply thinking that you’re the world’s greatest racing driver might be enough to actually make you a Formula 1 winner.

That’s because while companies such as Volvo and Ford are developing technologies that can let the car take over the more mundane elements of driving, McLaren is looking at how innovation can strip away the layers between a driver’s decision and the car’s response.

So, instead of a steering wheel covered in knobs, toggles, switches and other buttons for altering everything from traction control levels to throttle response and suspension, thinking about how the car needs to be set up for the next corner or straight will be enough.

“With the futuristic McLaren MP4-X concept racecar, we wanted to peer into the future and imagine the art of the possible,” said John Allert, Group Brand Director, McLaren Technology Group.

So as well as an enclosed cockpit and helmet that provides a 360-degree camera feed and mind control, the car benefits from the latest in emerging aerodynamic and alternative fuel innovations.

That means that the F1 concept, which looks like it’s escaped from the set of a Tron sequel, uses electric motors. But rather than have a big battery up front or behind, McLaren has made the car’s chassis structure one big cell.

The car will also be able to harness sunlight for a solar energy boost when needed and would be able to draw electricity for recharging the system via pads if they were installed under the surface of a racing circuit.

“We have combined a number of F1’s key ingredients — speed, excitement and performance, with the sport’s emerging narratives — such as enclosed cockpits to enhance driver safety, and hybrid power technologies,” said Allert.

The car is also capable of changing shape to suit demands — more downforce, greater agility or bigger fuel savings. “We looked at what technologies might be useful on a future road car — achieving lower drag for fuel-saving would be extremely useful,” said Chief Innovation Officer, Geoff McGrath.

But the company’s innovations don’t stop at the car itself. McLaren also envisages smart clothing that the driver will wear to monitor vital signs and fatigue levels and which could light up in the event of an accident to show first responders where the impact was greatest or where potential injuries are most likely to be.