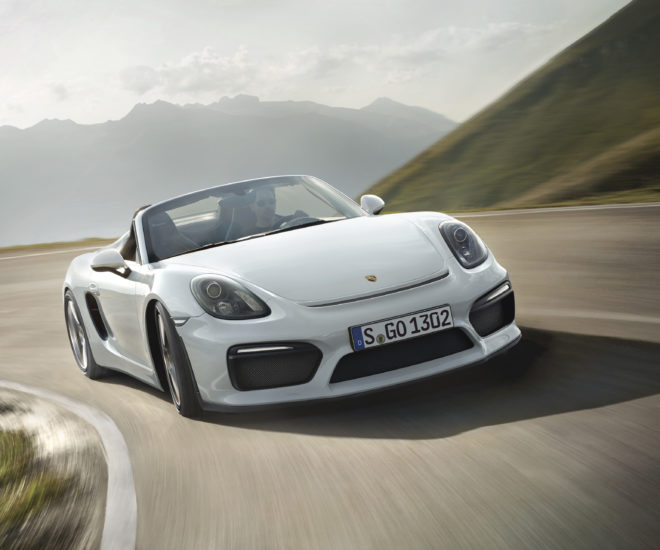 A new, lightweight yet incredibly potent, stripped back version of the Porsche Boxster has been revealed ahead of the New York Auto Show.

Based on the standard two-seat open-top convertible, Porsche describes the new Spyder, which will take up position at the very top of the Boxster range, as its purest roadster, yet.

Gone is the option of a paddle-shift transmission in favor of a six-speed manual and likewise the motors and electronics for automatically raising and lowering the roof. Like the gear change, it will need to be done by hand.

However, dumping these and other fripperies has helped Porsche trim 105kg off the car’s weight and this would make a noticeable difference to performance if the car had the 3.4-liter flat-six engine that sits in the middle of the incumbent Boxster flagship, the GTS.

But for the Spyder, Porsche has really gone wild, and has endowed it with a 370bhp 3.8-liter flat six, sourced from the 911 instead. That means 0-100km/h in 4.5 seconds and a top speed of 290km/h (180mph) and thanks to bigger brakes, a 20mm lower ride height and a sports suspension system, more of this performance will be available more of the time — whether racing off the line or into a bend.

Porsche has also looked to other cars in its range for the Spyder’s exterior design. Although it is still undoubtedly a Boxster, it looks beefier and the twin rear bulges that run the length of the rear deck should evoke comparisons with the current 918 Spyder and memories of the 718 Spyder form the 60s.

The cabin is minimalist and has a very focused, sporty feel.

The seats are proper bucket seats with increased side support for helping driver and occupant cope with lateral forces, the steering wheel is just 360mm in diameter for more precise control and there’s neither a radio nor air conditioning.

However, though dumped to save weight, both are available as no-cost optional extras. The Boxster Spyder will go on sale in Europe and the US this summer, following its official reveal at the New York Auto Show on April 2.