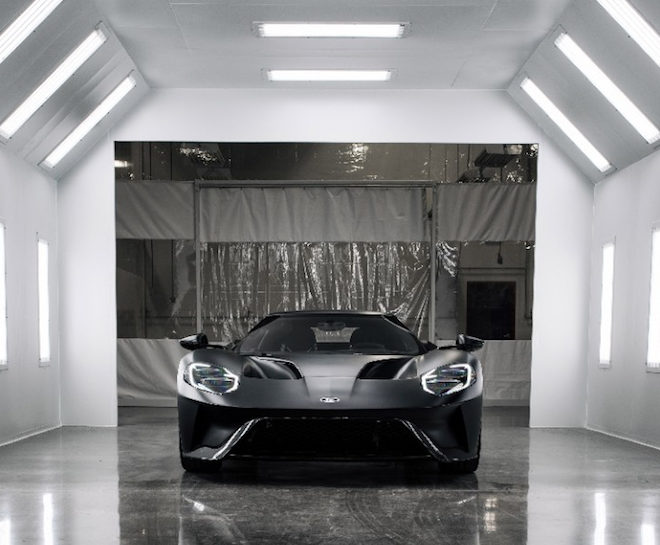 One supercar fanatic is set to have a very happy Christmas. The first road-going, customer-specified Ford GT has officially rolled off the production line in Ontario, Canada.

It’s been over a decade since Ford last had a halo car in its range with the vital statistics to take on the likes of Ferrari, Porsche and Lamborghini, and in terms of performance figures and rarity alone, the new car should be worth the wait.

Powered by a twin-turbocharged 3.6-liter V6, the 2017 Ford GT it can send almost 600hp to its rear wheels. And while that might not be as much as on offer from a Ferrari F12 Berlinetta or a McLaren 650S, its ultra-lightweight construction should ensure that what it lacks in outright horsepower, it makes up for in acceleration.

“When we kicked off 2016, we had two primary objectives for our Ford GT supercar — to excel at Le Mans, and to start deliveries before year-end,” said Raj Nair, Ford executive vice president, global product development, and chief technical officer. “We’ve achieved both.”

Indeed the racing version of the new car won its class at this year’s most important endurance race, exactly 60 years after the original Ford GT 40 wrote itself into the history books with its never before (or since) achieved 1-2-3 finish.

“The all-new Ford GT is a showcase of our strength in innovation and our commitment to delivering more for our customers — especially related to lightweight materials, aerodynamics and EcoBoost engine technologies,” said Nair.

Despite a lack of confirmed performance figures, plus the fact that the car will demand a $500,000+ premium (local dealership rates not available), Ford has been inundated with orders for the car, and could quite easily have sold over 6000 examples, rather than the initial 250 planned over the coming year.

Demand was so great for the car that Ford had to set up an online ordering system where potential customers essentially had to justify why they should own one. Over the next four years the company aims to build a total of 1000 GTs and once the production mid-point is reached, the company will be relaunching the website in order to sell the second batch of 500.

See more of the new Ford GT Job 1 supercar in the video below: