The Mercedes-Benz SL Mille Miglia 417 Edition commemorates the victory of a 300 SL in the production sports cars class at the 1955 “Mille Miglia.” 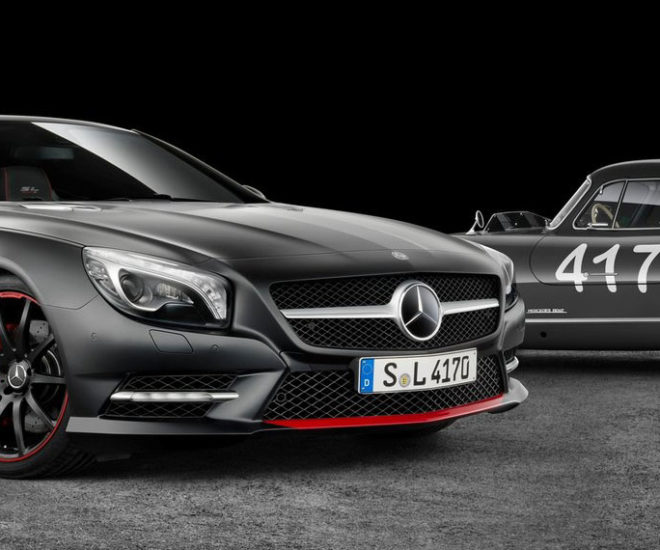 To mark the 60th anniversary of its remarkable win at the legendary Italian endurance-racing event, Mercedes has decided to celebrate with a special version of its current SL roadster.

The Mille Miglia is so called because the course is roughly one thousand miles (1597km to be exact) and is still held every year in Italy along the main road from Brescia to Rome and back again.

Today it’s a classic car event, a celebration of the automotive, but in the 1950s it was just as much a proving ground for cars and drivers of the period as the Nurburgring is today, but with much better scenery and food. The new Mercedes-Benz SL Mille Miglia 417, of which just 500 examples are going to be built, is inspired by the production SL from 1955 which, at the hands of American private driver John Fitch and co-driver Kurt Gessl, set off at 4:17 AM and completed the course — Brescia to Rome and back again — in 11 hours, 29 minutes and 21 seconds, winning the production car class in the process.

So that it stands out from a standard SL, the special edition’s exterior is finished in magnetite black metallic paint with contrasting red accents on the chin and rear spoilers. Inside the contrasting theme continues. The car gets AMG line carbon-framed leather seats with red and black leather trim.

The dashboard and interior panels are finished in carbon black and even the floor mats are embroidered with “1000 Miglia”. The finishing touch is a red and black nappa leather wrapped sports steering wheel.

If potential owners would prefer something a little less restrained than magnetite black, a glossier black and an equally glossy or matte white exterior finish are also available as options. The SL Special Edition “Mille Miglia 417” will make its global debut at the Geneva Motor Show in March and will be available to order from April 7.