McLaren Automotive has unveiled the new X-1 concept sports car at the 2012 Pebble Beach Concours d’Elegance event in the US. 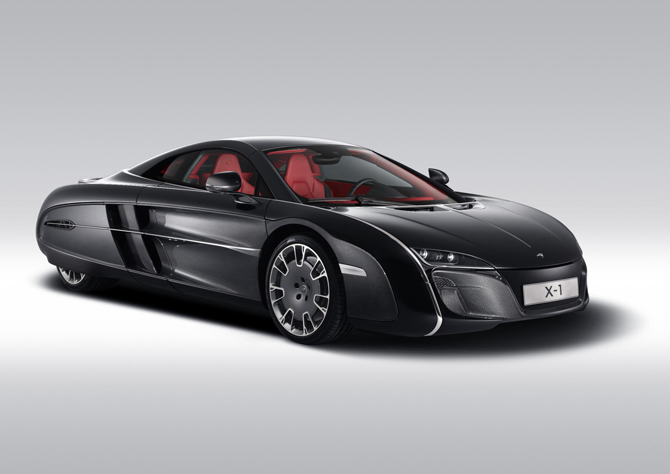 British automotive manufacturer McLaren Automotive has unveiled the new X-1 concept sports car at the 2012 Pebble Beach Concours d’Elegance event in the US.

Created for an “anonymous car enthusiast,” the one-off model was built by McLaren Special Operations (MSO) and is based on the MP4-12C.

The mystery man is a devoted McLaren fan who has already splashed out on a McLaren F1, a Mercedes-Benz SLR McLaren and a MP4-12C.

He contacted McLaren’s executive chairman some three years ago and explained he wanted a new model exclusively for himself. The client wanted a machine that had all the capability of the 12C but wrapped in a unique body that reflected his needs and personality.”

He said it should borrow cues from classic cars (a 1961 Facel Vega, a 1953 Chrysler D’Elegance Ghia, a 1959 Buick Electra, a 1939 Mercedes-Benz 540K and a 1971 Citroën SM), a Jaeger LeCoultre clock, an Airstream trailer, a Thomas Mann Montblanc pen, a grand piano and an eggplant.

The client then hosted a competition which pitted McLaren’s designers against others outside the company. In the end, a design by McLaren’s Hong Yeo was chosen and the client signed off on production. The interior carries over from the MP4-12C, but has been equipped with Harissa Red Nappa leather upholstery, nickel-coated aluminum switchgear and titanium-weave carbon fiber trim.

The sports concept is based on the carmaker’s 12C and is expected to be powered by a 3.8litre V8 twin turbo engine mated to a 7 Speed SSG dual-clutch transmission, which allows the concept to generate 616hp output and 600Nm torque.