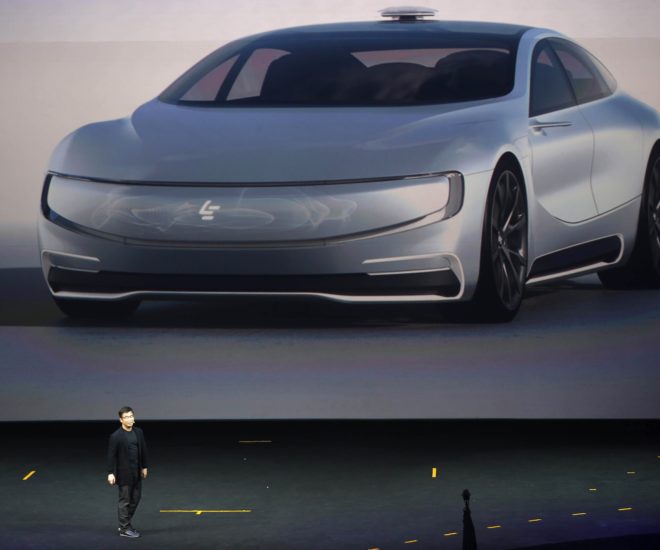 The global car industry is going through a roller coaster ride right now, with sales peaking in many markets yet many of the biggest players find themselves embroiled in scandals. As the Beijing Auto Show opens April 24, the industry faces both more sobering news and exuberant breakthroughs. According to consulting firm McKinsey, auto sales growth is projected to grow in China by just five percent annually over the next five years. China is the world’s number one auto market so if things pan out as McKinsey say they will, there will be much pain to go around.

The bright spot though is hinted at in the image we used above. That is the new concept car from LeSee, the automotive division of Chinese tech firm LeEco, and it is packed with impressive high tech offerings, including a one-piece glass roof, from windscreen to rear window. The BBC says it makes a Tesla Model S look “downright ordinary.” Before we go back to the doom and gloom, the other bit of interesting news here is that LeEco is the major investor backing Faraday Future, the US-based start-up we reported on here.

“After years of double-digit growth, China’s auto market is slowing down. A cooling economy is one of the primary factors in the deceleration of what remains the world’s largest market for automobiles,” McKinsey said.

The anti-corruption campaign under President Xi Jinping has reduced the appeal of luxury cars, it added, and “significant numbers” of consumers believe they can meet their transport needs by leasing, co-owning, or renting vehicles.

“There’s no sign of momentum,” said Michael Dunne, CEO and strategist at Dunne Automotive in Hong Kong. Competition is growing and “the China profit machine is slowing”, he said.

Competition for market share has become more intense as Chinese carmakers have improved their offerings, particularly in the surging SUV segment, where sales leaped by over 50 percent in the first quarter of 2016 as consumers opted for bigger cars on the country’s hair-raising roads.

Namrita Chow, principal China analyst at IHS automotive, said that international manufacturers can no longer “overlook the Chinese brands, saying, oh they don’t have what it takes to be a competitor. Those days are gone.”

Indeed, LeEco is a prime example of what Chinese firms are bringing to the table, or promising to at any rate. LeEco and Aston Martin announced a partnership February that will allow the British automaker to build its own fully electric ride, likely based on the Rapide saloon.

If nothing else, this illustrates that fears of a slowdown are offset to some extent by opportunities created by the rapidly changing industry, analysts said.

GM China president Matt Tsien said earlier this year that the global giant “expects the automotive industry to change more over the next five to 10 years than in the past 50 years”.

General Motors’ president Dan Ammann pointed to “the inevitable march toward autonomous vehicles” as an opportunity, saying: “We think self-driving cars have the ability to significantly make roads safer”.

More than half of over 3,500 consumers surveyed by McKinsey wanted to upgrade their cars and report co-author Paul Gao told AFP: “The growth is still solid. Five percent out of a big base still makes China a very attractive market.”

This story was written in-house, based on an AFP report and various news reports, including the BBC report cited. The image featured is from the AFP.