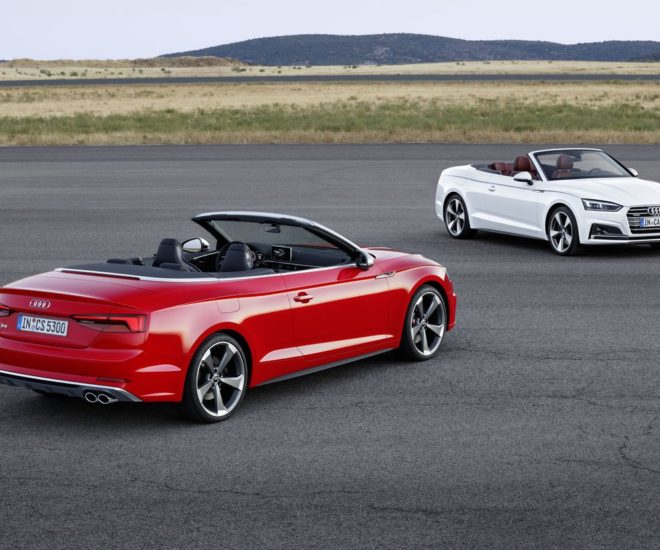 Summer is officially over even on the west coast of America but if you’re an optimist, you’ll be glad to hear that the new Audi A5 cabriolet will be making its official debut at the LA Auto Show November 14. In our opinion, nothing says ‘optimist’ better than a drop-top car – especially if you live in the tropics – and that is just the message that Audi is hoping the market picks up on at the show.

Based on the equally new hardtop counterpart that greeted the world at the Paris motor show in September, the second generation drop-top A5 promises to be a much more driver-focused model than its predecessor.

Not that the old A5 convertible was a slouch but thanks to new manufacturing processes and materials, this one should feel stiffer (by 40% says Audi) and more planted and should cut through the air with aplomb due to its more slippery exterior shape. In other words, Audi has drawn on its engineering knowhow to offset the negative qualities of a drop top – cutting off the roof reduces a car’s stiffness, strength and can impact handling.

As well as being stronger, it is also longer and wider than the old A5 so a lower center of gravity for even more fun in the bends but, crucially, greater rear legroom and front passenger shoulder room. Adults in the back will have 18mm more space between their knees and the back of the new, more compact front seats.

Striking up a conversation shouldn’t lead to a shouting match either. The soft top is heavily insulated to keep external noises out and when the roof is down (in just 15 seconds with the touch of one button) driver and front passenger can whisper to each other (or to the car’s voice command system) thanks to integrated microphones in the front seatbelts.

In terms of toys, tick the right boxes and the car can be specified with up to 30 different driver aids from collision avoidance and park assist to a form of piloted driving for traffic jam situations and on routes with a speed limit of up to 65km/h where the car can accelerate and brake for itself and can also step in with steering. It can even adjust performance or give tips to help conserve as much fuel as possible.

This could be a very handy feature if plumping for the hot S5 version with its 3-liter 354hp six-cylinder turbocharged engine. It promises a 0-100km/h time of 5.1 seconds comes with Quattro all-wheel drive and an eight-speed paddle-shift transmission as standard.

Order books for the A5 and S5 cabriolet will open in March 2017.