Elsa, Anna and Olaf have been taken to heady new heights after WestJet revealed their new Frozen themed plane. 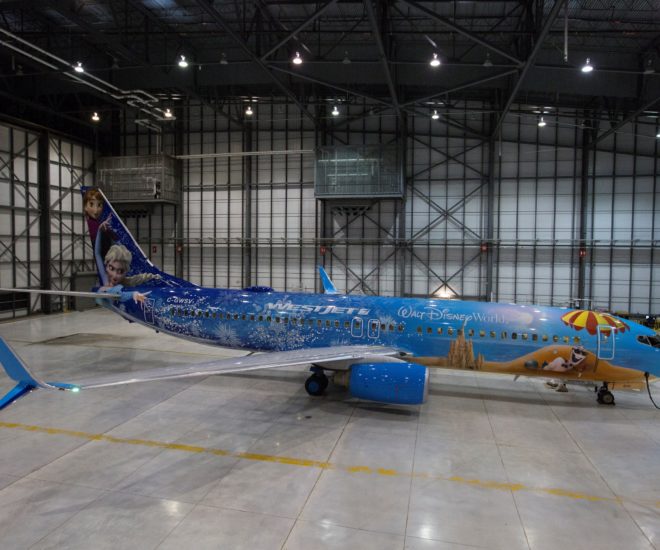 Canadian airline WestJet has unveiled a new “Frozen”-themed plane that is set to send little girls soaring, with Elsa and Anna on the tail of the plane and Olaf the snowman emblazoned on the fuselage.

For 21 days, a crew of painters from Canada, the US, and Germany were squirreled away in a hangar in Fort Worth Texas, and commissioned to transform a regular aircraft into a flying “Frozen”-themed universe. In addition to the outside fuselage, the cabin interior is also decked out nose-to-tail. Overhead bin doors are transformed with “Frozen” decals and headrests are jazzed up with covers sporting emblems of Arendelle.

For some sparkle, painters added glitter to sections of the aircraft to produce the effects of shimmer and shine as it moves in the light. In all, the crew used about 645 liters of paint and 23 colors for the aircraft. After a year of planning, six painters brought the sketches to life working 12-hour rotations for 21 days, 24/7. WestJet is the latest airline to strike a major collaboration with the movie industry. Last month, Japan’s flagship carrier ANA unveiled the first of their three Star Wars-themed jets featuring R2-D2 and the plane took its first international journey this weekend, shuttling passengers between Haneda, Japan and Vancouver, Canada.