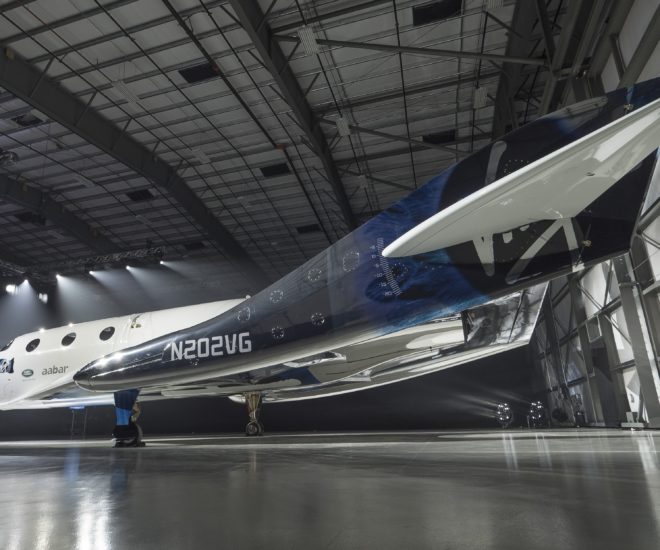 Some 16 months after the fatal crash of the Virgin Galactic commercial spacecraft, the space tourism company owned by British billionaire Richard Branson revealed a follow-up February 19. SpaceShipTwo is the rather bland name for this ambitious effort, although the new model spacecraft is reportedly called VSS Unity.

The big reveal Friday marked the beginning of a testing phase for the SpaceShipTwo, and the company underscored that commercial space flights would not be available until Virgin Galactic was satisfied it could carry them out safely.

“As we celebrate the end of one critical phase of work, we also mark the start of a new phase, one focused on further testing and, ultimately, the first commercial human spaceflight program in history,” Virgin Galactic said in a statement.

The new spaceship, which largely looks the same as its predecessor, made its debut in a ceremony at the Mojave Air and Space Port in California. It was towed into a hanger by a white Range Rover SUV, with Branson standing in the sunroof and waving.

It was dubbed the “Unity,” a name chosen by renowned physicist and cosmologist Stephen Hawking, Virgin Galaxy said in a tweet.

The company’s goal is to take customers to the edge of space, more than 62 miles (100 kilometers) above Earth.

Despite the hefty $250,000 price tag, more than 600 would-be astronauts have already signed up, including Hollywood actors Leonardo DiCaprio and Ashton Kutcher.

However, the company’s efforts faced a major setback when the first version of the SpaceShipTwo disintegrated over California’s Mojave Desert on October 31, 2014, with investigators blaming premature brake deployment during the test flight.

The pilot was injured but successfully deployed his parachute, while the co-pilot was killed.

“It’s not an easy business. If it was an easy business we wouldn’t only have had 500 people having been to space since space travel started,” Branson told Sky News on Friday.

Testing on the SpaceShipTwo, which Branson said was constructed by a team of 650 engineers, will begin with the electrical system and moving parts, followed by flights attached to the WhiteKnightTwo mothership before progressing to glide testing.

“Because our new vehicle is so similar to its predecessor, we benefit from incredibly useful data from 55 successful test flights as well as the brutal but important lessons from one tragic flight test accident,” Virgin Galactic said in its statement.

SpaceShipTwo is a commercial version of SpaceShipOne, the first private spacecraft to reach the edge of space in 2004.

The new craft may one day carry six passengers on three-hour suborbital flights, offering them the possibility of momentary weightlessness and unparalleled views of Earth.

“The most important thing is that we get the test program done and completed so we can send people safely into space. And start a program where this spaceship can go into space hundreds of times in the years to come,” Branson told Sky News.