Who Decides What Wine Presidents Drink?

Meet Virginie Routis, the woman in charge of the wine cellars at the Elysee Palace and its 14,000 bottles of some of the finest wine in France. 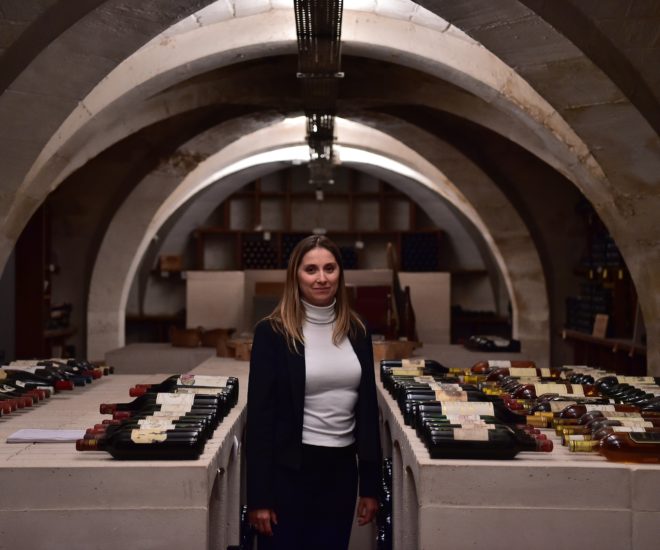 It came as a shock. But Virginie Routis learned very early that one of the obstacles she was going to have to overcome to become a top wine waiter was sexism.

The soft spoken sommelier was working in one of Britain’s best restaurants when a man threw the wine list back at her.

To say that Routis, the first woman to ever be given the keys to legendary cellars of the Elysee Palace, has had the last laugh is something of an understatement.

She not only presides over the 14,000 bottles of finest French wine beneath the French president’s official residence, but she has also been responsible for one of the biggest shake-ups of the closely guarded national treasure in decades.

The 38-year-old is also responsible for serving – and impressing – the monarchs and heads of state who regularly dine at the Elysee.

French President Francois Hollande gave her “carte blanche” to serve what wines she thought best to with his chef Guillaume Gomez’s menus.

And she is spoiled for choice from the Elysee’s staggering collection which goes from mythic names like Cheval Blanc, Latour, Batard-Montrachet de Joseph Drouhin, Domaine Leflaive Puligny-Montrachet to high quality wines from all of France’s wine regions.

“When we are entertaining a head of state, we generally go for safe bets like a white burgundy, or a grand Bordeaux red, but for lunches we can range out to Alsace, Cahors, Corsica” and elsewhere, she said.

“I like to play on surprise, and I know the President is very open to that,” she added.

Routis was only 30 when she took over at the Elysee and had to deal with the rather challenging prospect of Nicolas Sarkozy, the chocoholic former French president who does not drink wine.

Luckily, his wife the singer Carla Bruni did and it was with her that Routis would discuss the choice of wine.

Although Routis admitted that as a woman she had to fight for her place in the very masculine world of wine waiting, now up to a fifth of sommeliers in France are women.

“It is much more straightforward” than before, said Routis, who points to Estelle Touzet, sommelier at the Ritz, or Marlene Vendramelli, who was named the best young sommelier in France in 1993, for helping to break the glass ceiling.

In fact, she argues women may be better at the job.

“I think we have a more sensitive palate and we have perhaps a more simple way of explaining wines, which is less technical than men. But it is good to have a mixed team,” she said, forever the diplomat.

In 2013 Routis sold off some 1,200 bottles from the temperature-controlled Elysee cellar – which is protected by an armored door – in a major reorganisation of its stock.

Of all the state dinners and banquets she has had to deal with, Routis said the one that marked her most was the visit in 2014 of Britain’s Queen Elizabeth II.

Having begun her career in England at French chef Raymond Blanc’s Manoir aux Quat’Saisons near Oxford, she knew to some degree what was expected but she admitted that it was still “one of the most stressful” dinners.

For the occasion she served a Sauternes, Chateau d’Yquem 1997 as an aperitif, Haut-Brion 1990 red Bordeaux and a Pol Roger champagne, cuvee Winston Churchill, in a nod to Britain’s wartime leader’s favorite tipple.