No other single malt Scotch whisky goes beyond two distillations for every drop, making Auchentoshan arguably the purest dram on the market. 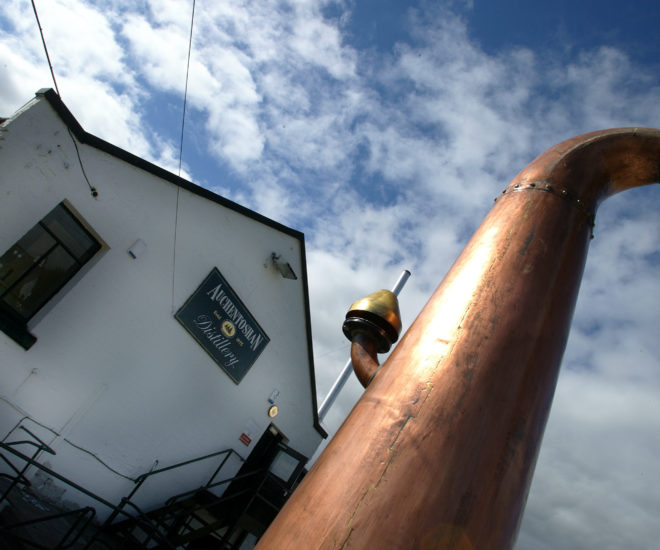 The recipe for making Scotch whisky is pretty straightforward: place malted barley in water with a bit of yeast, distil the mixture before putting the spirit to rest for a minimum of three years in an oak cask. Sure, distilleries these days have modernized stills and wash backs with computers and state-of-the-art apparatus but the core process and ingredients haven’t changed a great deal for hundreds of years.

With that in mind, distilleries and alcohol conglomerates will find ways to stand out as much as possible. It could be by means of something seemingly trivial like fancy bottle packaging or pumping a special loch where special water comes from. It might come in the form of an incredible backstory of how its founder sailed the Seven Seas, bringing with him an idea to deliver a golden spirit to the world, one that is capable of evoking visions of a piper playing a sad tune with eagles calling in the far distance. Or perhaps it is about something more technical like making use of rare casks that no other distillery has access to or attaining a level of peating that no others have. Every distiller has a different story to tell.

Yet, for all the different types of water or barley varieties, bottle shapes and sizes, and oak casks, every distillery in Scotland shares one thing: They all distil their spirits twice. And so, standing in the courtyard of the only distillery in Scotland that distils every drop of its whisky thrice, walking around its impressive whitewashed buildings and warehouses, and even greeting the four Highland cows (the distillery’s resident mascots as some have said) at the front of the field, I knew I was in for an interesting, albeit jet-lagged morning. First off, Auchentoshan (pronounced AUK-en-TOSH-en) is Gaelic for “corner of the field”. Founded in 1823, the distillery is located in the industrial town of Glasgow, and is only one of three working single malt distilleries in the Lowlands region today – a surprising fact considering that the Lowlands produces more whisky than all the other regions put together. And this is because the big blended whisky companies such as Johnnie Walker, Chivas Regal, and Famous Grouse are located there.

Stepping into the mash tun room, which makes use of Oregon pine tuns instead of the widely popular stainless steel ones, I was given a dram of Auchentoshan 12-year-old. “It’s never too early to have Auchentoshan,” my guide opines. “And that is because Auchentoshan is the breakfast whisky.” Nosing and tasting the dram, I could immediately see why. Fresh citrus notes burst forth before easing off for a light, smooth finish. “That’s because of our triple distillation, my friend,” the guide smiled.

The method of triple distillation (a story that is echoed throughout the entire distillery) is by no means an unprecedented affair. The first person to use it was John Jameson who founded Jameson whiskey in Ireland. However, the man himself was Scottish and had chosen to leave the country because of the high taxes that were placed on whisky production. The practice of triple distillation was brought over by the high influx of Irish immigrants going over in the late 1700s and early 1800s. As a matter of fact, there used to be many other distilleries making use of the triple distillation method especially in the Lowlands. But due to bad barley stocks and other factors such as company takeovers, these distilleries died off, leaving Auchentoshan as the only one out of Scotland’s 133 working distilleries today who’ve hung on to the age old process. Auchentoshan makes use of a trio of stills rather than the common pair. The first distillations sees 35,000 litres of alcohol wash being piped through to the wash still before moving through the lyne arm toward the condenser to produce an oily Schnapps-like liquid called low wines with an average alcohol content of 18 per cent. The actual spirit distillate begins life as fore-shots – the remnants of the previous distillation combined with the current distillation. But foreshots don’t make it any further; they’re recycled through the spirit safe into the feints receiver. And after about eight minutes of foreshots, the spirit runs clear. It is known as “new make spirit” or “heart of the run”, which will eventually become Auchentoshan whisky after maturing.

Finally, the distillers take the high strength feints and distil them in the spirit still – from 55 per cent right up to the signature Auchentoshan strength of 81 per cent ABV. This high alcohol content liberates a complex compliment of congeners from the still, which they collect in the spirit receiver for maturation. It is a very technical process that isn’t easily understood. To simplify matters, distillation is the process of purification. And what Auchentoshan has done is to add another layer of purification, which essentially means that every single drop of its precious liquid is purified three times over, resulting in a much lighter and smoother whisky than most of its peers.

In fact, every other aspects of Auchentoshan’s whisky-making process contribute to its signature gentle nature. The water Auchentoshan uses comes from Loch Katrine, a body of water that is not mineral heavy. The distillery also utilises 6.8 tonnes of malted barley a day that are dried using only hot air, which compared with peated barley, are not as fragrant or heavy.

In terms of cask management, Auchentoshan makes use of four types of casks – American bourbon, Oloroso sherry, Pedro Ximénez and Bordeaux wine. Every drop of whisky starts its ageing process in white American oak to absorb light and sweet notes, before moving on to the darker Spanish or French oak for added complexity of flavor. Auchentoshan ages its whisky for a minimum of eight years and uses casks a maximum of three times, which is a lifespan of about 30 years per cask before selling them off to other distilleries to be used as refill casks. The result is a core range of expressions – Auchentoshan 12-, 18- and 21-Year-Old, Auchentoshan American Oak and Auchentoshan Three Wood (whisky aged in American oak, Oloroso sherry, and Pedro Ximénez) – that boasts of light citrus notes and flavors of vanilla, honey, almonds, and long, lingering and smooth finishes.

At the end of the day, there’s no doubt that Auchentoshan’s story of triple distillation is its way of trying to stand out in the industry. But unlike a narrative about a headstrong, travelling founder who passed away decades ago, leaving behind a legacy that continues to live on, or the incomparable flavors that certain rare casks impart (an effect that can only be observed after years of maturation), Auchentoshan’s triple distillation is a tangible everyday occurrence, one that is open for all to witness. After all, seeing is believing. I saw. And I have to say that I do believe.

Download the Epicurio app on iTunes or Google Play now, to learn more about whisky and purchase your very own bottle, today. All distillery photos by Peter Devlin