The world’s biggest and most expensive cruise ship, Oasis of the Seas, was recently handed over to the Royal Caribbean cruiseline in Finland. The vessel, worth 900 million euros (1.3 billion dollars), can accomodate up to 6,360 passengers and 2,160 crew members. The cruise ship features a variety of traditional and new activities including swimming […] 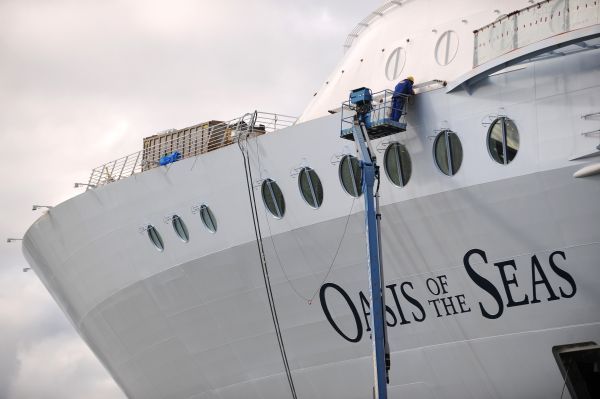 The world’s biggest and most expensive cruise ship, Oasis of the Seas, was recently handed over to the Royal Caribbean cruiseline in Finland.

The cruise ship features a variety of traditional and new activities including swimming pools, a casino, pool surfing and a zip line above the boardwalk. Richard Fain, the chief executive of Royal Caribbean, told reporters the new ship had attracted strong pre-bookings despite the global financial crisis and said the aim was to lure new customers who have not cruised before.

There are however still spots left for the ship’s maiden voyage in December.

“We like to deliver the vow and I think it’s fair to say that this ship delivers the vow,” he said. “Part of the thought process of the ship is to overcome the old myths people have about cruising. It’s very hard to look at a vessel like this and think that cruising is secondary when you can choose rock-climbing, surfing or zip-lining,” Fain explained.

He added that the company was targetting international clients, not just American or European cruisers, with Oasis of the Seas, which will be sailing mainly in the sunny Caribbean. It’s also catering to younger, more active passengers with children, and therefore offering a wider selection of activities, including 21 swimming pools, an aqua park, a carousel and a science lab. Oasis of the Seas will make its four-night maiden voyage from Fort Lauderdale to Labadee in Haiti on December 1.