The ultra-conservative Saudi Arabia’s latest attraction allows for its residents to enjoy cooler temperatures while having fun. 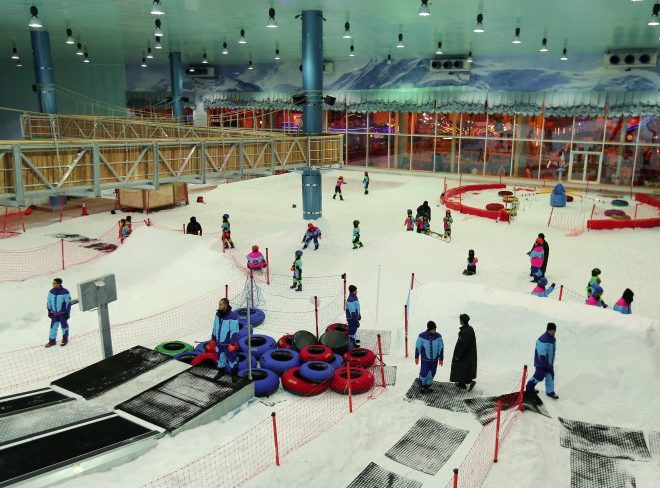 Saudi Arabia is probably the last place you’d expect to wear a ski jacket but Saudis can now enjoy that winter chill because there’s a new snow park in Riyadh.

The new “Snow City” means that Saudi women can now trade the mandatory traditional abaya for thermal coats and cosy boots while scooting down the snowy slopes. For a country that only has small-scale amusement parks for children, and where cinemas and theatres are not allowed, the cool 5,000 square-foot complex allows for males and females to congregate in the same area. While it doesn’t have facilities such as proper ski pistes, the modest indoor slopes are enough to provide frosty fun to the citizens of the kingdom, who mostly only experience desert and searing heat.

The facility did not come cheap – four years of construction cost almost 100 million riyals ($26.7 million), but since its opening in mid-July, people have thronged the front counter to gain access to the play area. A whopping 75 percent of patrons are women, which is surprising for the ultra-conservative country known for its strict constraints. One employee at Snow City said the center’s management initially faced the problem of not having enough boots for women as they had not expected females to represent more than 10 percent of visitors.

“There is privacy and we’re enjoying our time here,” says one woman who identifies herself as Umm Ahmed, 37.

Saudi Arabia’s “Snow City” is not the first in the Gulf region. Dubai boasts an indoor ski resort that is complete with ski slopes, towbars and a chairlift. Saudi Arabia has been pushing to provide more entertainment options for its residents, more than half of which are youths under the age of 25. US Company Six Flags Entertainment Corporation has also announced in June that it’s in talks with Saudi Arabia to construct theme parks there.