Carnival Cruise Lines on Wednesday welcomed its newest ship, the Carnival Magic, at the shipyard in Italy where it was built. 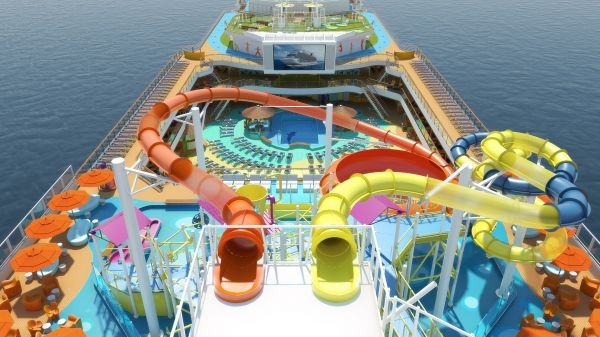 As guests on board cruise lines around the world prepare to toast the royal wedding April 29, Carnival Cruise lines has bucked the trend by announcing that it will be toasting its new ship, the Carnival Magic.

Guests on board all 100 of Carnival’s ships — some 227,000 in total — will be offered a complimentary champagne toast at dinner April 29, to recognize the delivery of the 3,690-passenger Carnival Magic.

Fiercely royal Cunard (itself Carnival-owned), for its part, released photos April 27 of its flagship Queen Mary 2 being loaded with Veuve Clicquot champagne and commemorative wedding cakes ahead of its “Royal Wedding Celebrations at Sea.”

Carnival Magic will set off on her maiden cruise May 1, leaving Venice for Barcelona before crossing the Atlantic to Galveston, Texas in the fall.

At 130,000 tons, she will be the largest ship ever to be based at Galveston and features some unique innovations, including an expansive open-air fitness complex with the first ropes course at sea (placed dizzyingly high above the water), a wraparound promenade with outdoor barbecue and the Waterworks Aqua Park.

According to reports in Australian publication eTravel Blackboard, she will also feature the largest show ever on board a Carnival ship, Destination: Unknown, starring stage magician and Las Vegas regular Jason Byrne.