Airbnb is running a contest that will give two lucky people the chance to sleep in the Catacombs of Paris, one of the world’s largest cemeteries. 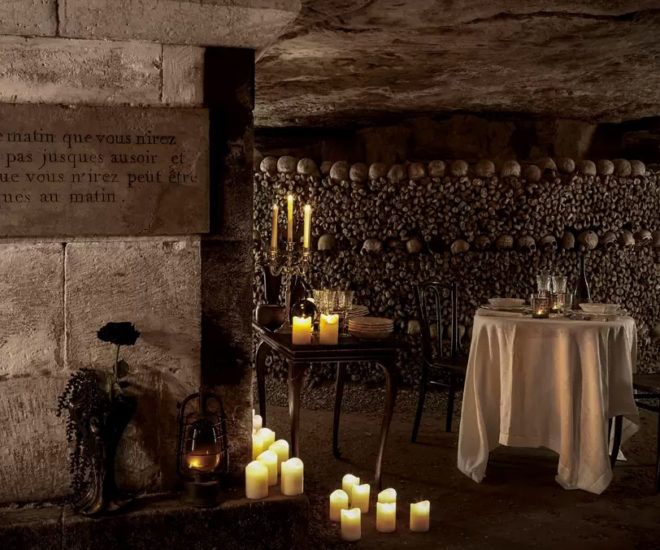 No one has ever woken up alive in Airbnb’s latest rental offer, but then again, no one has ever spent the night alongside six million dead Parisians in the city’s Catacombs.

For Halloween, the home rental website is offering brave travellers a night in the sprawling tunnels filled with skulls and bones that is one of Paris’s most popular — and ghoulish — attractions.

The competition offers two people a night in the Catacombs on October 31, with a “real bed”, dinner with private concert and breakfast.

“Before bedtime, a storyteller will have you spellbound with fascinating tales from the catacombs, guaranteed to produce nightmares. Finally, enjoy dawn with the dead, as you become the only living person ever to wake up in the Paris catacombs,” reads the listing. Town hall sources said Monday the California-based Airbnb paid up to 350,000 euros to privatise the tunnels.

The transfer of human remains from Parisian cemeteries to the tunnels began towards the end of the 18th century when authorities realised that the decomposition of bodies in the city’s cemeteries was not particularly good for public health.

“It was said that the wine was turning bad and the milk was curdling,” Sylvie Robin, the site’s curator, told AFP in an interview last year. Among the bones lining the walls of the two-kilometre (1.2-mile) long tunnels — only a small part of a network of abandoned underground quarries — are pictures and quotes about mortality.

The House Rules section on Airbnb, which allows property dwellers and owners to rent a room or entire home, warns guests to “respect the Catacombs as you would your own grave”. The Catacombs, some 20 metres under the sewers and metro system, lures some 500,000 visitors a year. It has already been rented out to film crews and for fashion shows.

Writers like Victor Hugo, Gaston Leroux and Anne Rice have all drawn inspiration from the spooky network of tunnels.