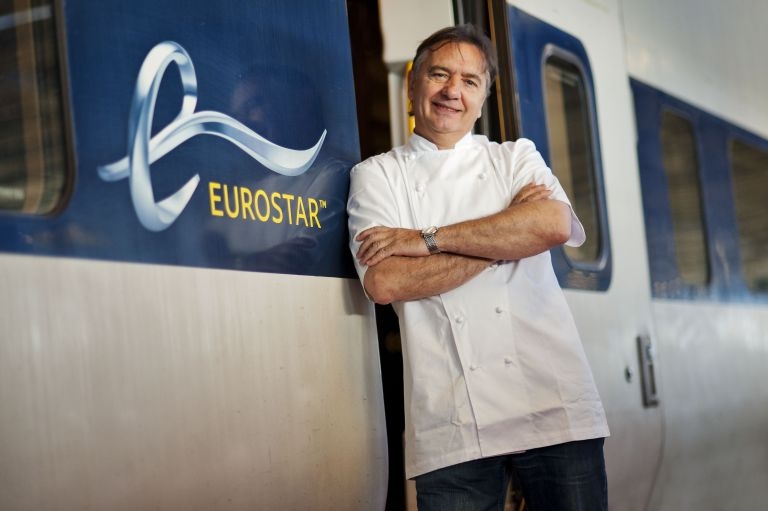 Poached pollock in an English white wine sauce and an apple, celeriac and Belgian pas de bleu cheese salad are among the courses available from Wednesday to passengers travelling in business premier class.

“Food on trains has got a bad reputation, so my role here is to bring the quality up,” said 62-year-old Blanc, whose television shows have made him one of Britain’s best-known cooks.

The self-taught chef, whose restaurant Le Manoir aux Quat’ Saisons in southern England holds two Michelin stars, has developed a menu based on seasonal ingredients from the three countries connected by Eurostar.

Passengers departing from Paris will find mainly French food on their trays, such as salmon pate with horseradish and cauliflower — while those leaving London will be served mainly British fare, including English camembert cheese.

On journeys from Brussels, dishes will feature Belgian ingredients including the pas de bleu cheese. “The food is going to be prepared in advance and the main course is going to be reheated — it’s quite challenging.”

“I’m removing all the delicate food to concentrate on stronger food with a lot of personality, like cheese, sardines and apples,” said the Frenchman. “I want simple food,” he added. “You have less chance of messing it up.”

The meals will be prepared in Eurostar’s three kitchens, in Burgundy in eastern France, Sussex in southeast England, and Brussels.

Blanc acknowledged there were considerable challenges in attempting to serve high-quality food on a mass scale.

“I cannot compete with restaurants, of course I can’t,” he said. “But I will compete with business class and first class airlines.”

He insisted: “I’m not afraid to be criticised by my peers, because I do it with my heart, with my intelligence and with my ethics.”

Blanc said he hoped his collaboration with Eurostar would make him better known in his homeland, where he is considering opening a restaurant.