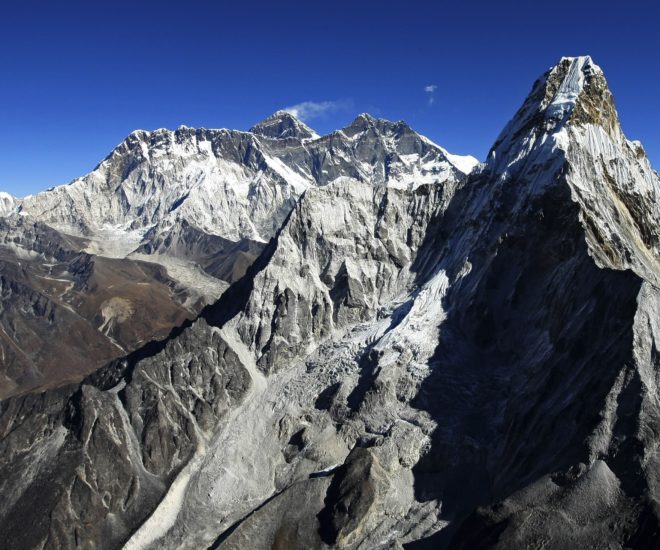 A former Noma chef is taking the once-in-a-lifetime adventure of trekking Mount Everest to new heights with the opening of a pop-up restaurant that will serve a gourmet meal in the clouds.

For many, the peaks of Mount Everest are an elusive travel fantasy, reserved for the most adventurous and intrepid.

Add to that the chance to tuck into a Michelin-grade meal at 17,000 feet (5,545 m) on the earth’s highest mountain, and you get an experience that ups the bucket list ante. The Nepal dinner party is one of 20 stops on chef James Sharman’s One Star House Party tour which kicked off in Beijing this fall.

It is an ambitious two-year adventure that will take Sharman to major cities around the world where he and four friends will host pop-up events catered to local flavors and cuisines.

For the fourth stop, guests will have to earn their dinner.

After setting off from Kathmandu, Nepal, a group of 15 guests will embark on a two-week trek to the base of Mount Everest, where they will then be invited to sit down to a dinner party prepared by a chef who has worked with London star chef Tom Aikens and in the kitchens of Noma restaurant in Copenhagen, four-time titleholder of “World’s Best Restaurant.”

The trip runs between December 10 to 23.

At each city, Sharman and four friends conduct research and reconnaissance missions for three weeks before developing the menu and building the pop-up restaurant.

After visiting Chengdu, a UNESCO-designated “City of Gastronomy,” renowned for its Sichuan cuisine, for example, Sharman developed his own version of Sichuan duck that applied the nose-to-tail concept to the plant kingdom.

For the recipe, the chef used all parts of the Sichuan pepper tree: wood was used to cook the duck; leaves crushed to make a powder and seasoning; and the berries infused in a flavoring oil.

Sharman also used a native root vegetable, celtus, to accompany the duck. Reservations for the 14-day Nepalese adventure close November 29 and are priced at $1,050 per person excluding flights.

The team is currently preparing for their upcoming pop-up in Bangkok which runs November 27 to December 3.Other stops on the two-year tour include Cape Town, London, New York, Mexico City, Vancouver and Hong Kong.