Bunch of grapes sells for record $8,200 in Japan

A bunch of grapes fetched a record one million yen, or approximately $8,200, at an auction in Ishikawa, Japan. 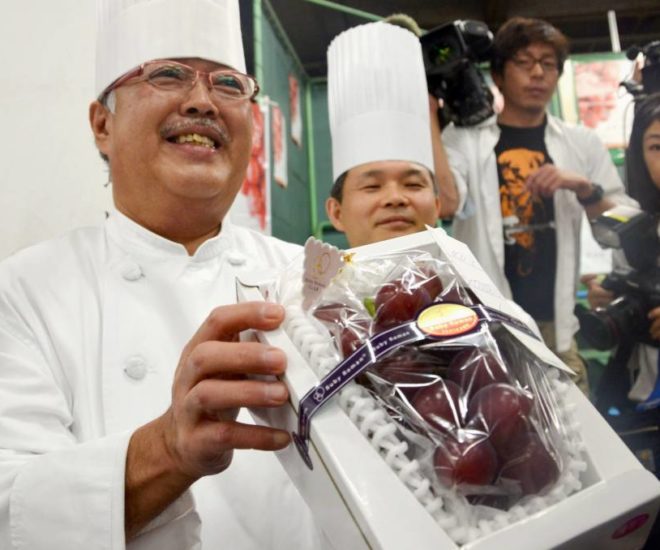 A bunch of Japanese grapes has sold for a record one million yen ($8,200), or $315 per berry — no trifling matter even in a country where fruit can cost a small fortune.

The record-setting bunch of 26 “Ruby Roman” grapes was the highest-priced at this year’s first auction in Kanazawa, 300 kilometres northwest of Tokyo, smashing the previous record of 550,000 yen set last year.

Each berry weighs at least 20 grams (three-quarters of an ounce) and is the size of a ping-pong ball, according to the local board of agriculture.

Winning bidder Masayuki Hirai, head chef of the Nikko hotel in Kanazawa, told media he had been under strict orders, with local tourism chiefs eager to capitalise on a new train line to the area.

“With the opening of the Hokuriku shinkansen (bullet train) line, I was told to win the bidding at any cost,” he said.

For connoisseurs of eye-wateringly-priced fruit, Japan is Seventh Heaven.

Earlier this year, a pair of Yubari melons from Hokkaido, northern Japan, were snapped up for a jaw-dropping 1.5 million yen.

Meanwhile, a Japanese department store thought nothing of shelling out 300,000 yen for a pair of pristine mangoes grown in southern Japan.