For Some Chefs, The Michelin Star has gone from Culinary’s Highest Honour to Curse

The famed Michelin Star is rapidly turning from cherished accolade to falling star and curse. LUXUO explores the dark side of the culinary art’s highest honour. 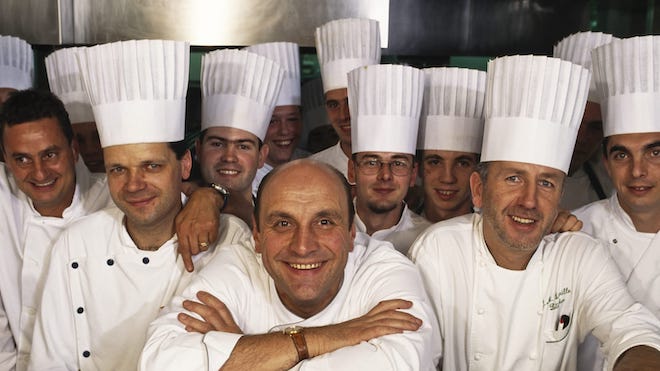 Bernard Daniel Jacques Loiseau in happier times with the team

Born 1951 in Chamalières, France. Bernard Daniel Jacques Loiseau made it his life’s ambition to become a 3-Michellin star chef. In 1972, working for restaurateur Claude Verger at La Barrière de Clichy, Loiseau was quickly recognised as a culinary prodigy. By 1991, after 17 years slaving over stoves at La Côte d’Or, Bernard Loiseau finally achieved his dream. In due course, the French government too awarded him their highest honour – the Chevalier (Knight) de la Légion d’honneur in 94. In 2002, Pixar began modelling fictional chef Auguste Gusteau after Loiseau for the seminal film, Ratatouille. This ever growing list of achievements came to an abrupt stop when in 2003, Loiseau shot himself in the mouth. 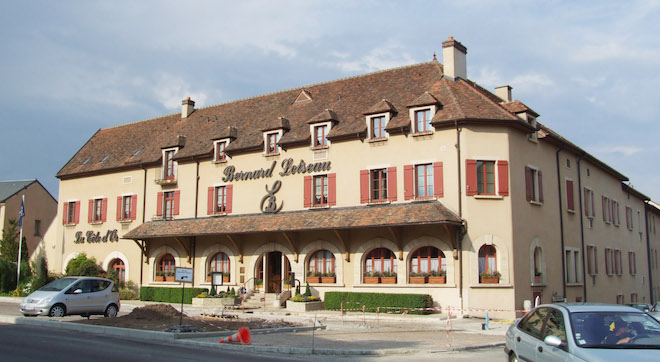 According to friend and fellow 3-star Chef Chef Jacques Lameloise , Loiseau had previously confided in him that he had considered suicide. Drowning in debt and dealing with a recent downgrading in the Gault Millau guide, French daily Le Figaro, commenting on rumours of Michelin planning to take away one of La Côte d’Or’s three stars was the final nail. Ending his kitchen shift, Loiseau shot himself in the head with a shotgun.

The criteria for the starred rankings were introduced in 1936: 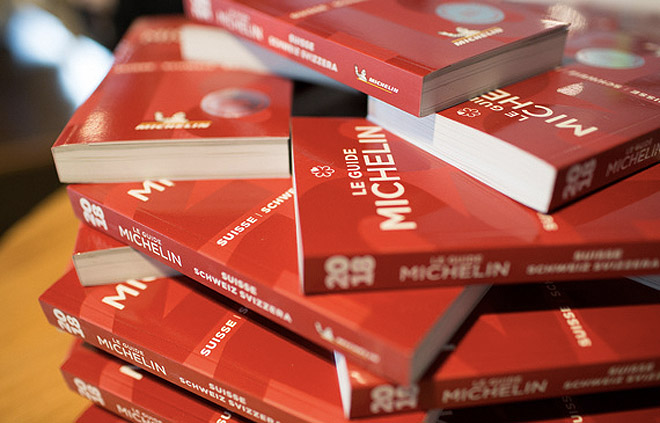 Fallen Star: For Some Chefs, The Michelin Star has gone from Culinary’s Highest Honour to Curse

“Loiseau was so scared of Michelin,” said Daniel Boulud to Vanity Fair. Chef-owner of his namesake in New York, Boulud was a good friend of Loiseau. His comments alongside Chef Lameloise’s about Loiseau are emblematic of just how much a star can influence its recipient. With its distinctive red cover, the guide rouge (to insiders), is considered the country’s more popular and therefore, more influential gastronomic bible, while Gault Millau has been considered more food-focused of the two.

The Michelin Guide reflects an opinion. If a movie critic goes to a movie and says it’s a good movie, or not a good movie, the director of the movie can’t say: “I’m going to give you your opinion back.” In the 118-year history of the guide, there have been rare occasions of chefs saying they are returning their stars, but the stars aren’t something physical you can give back. – International Director Michael Ellis, Michelin Guide 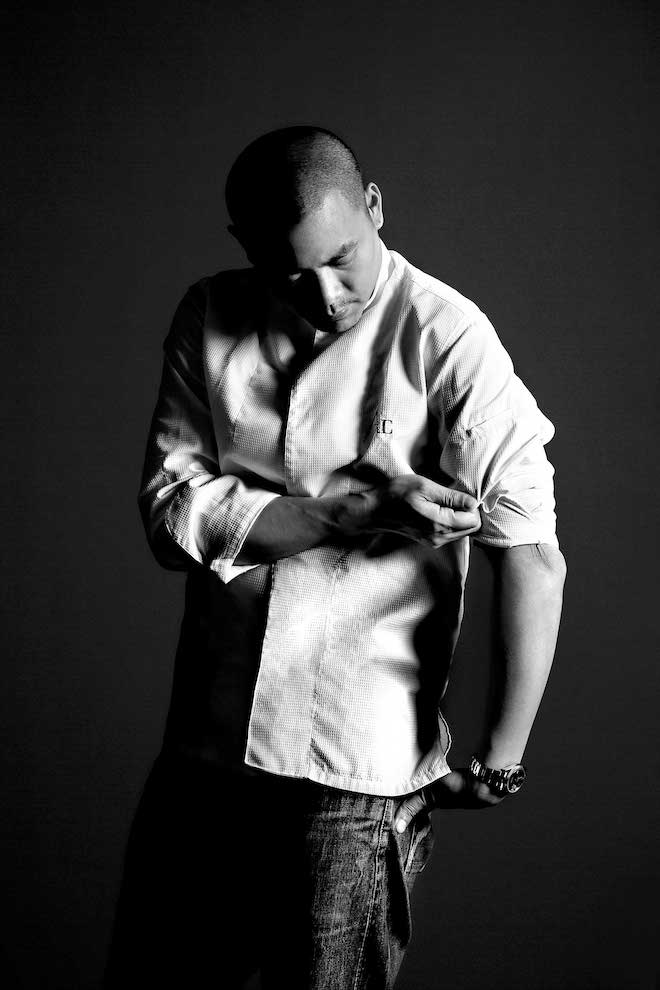 Though returning Michelin Stars are not a real thing and more of an urban myth, the pressure of maintaining Michelin three-star status (their highest accolade) is enough to prompt some to pre-emptively reject the honours. Chef Andre Chiang shocked the dining world on 11 October 2017 that he was closing ANDRE in February 2018 and requested that his continuing venture, Raw in Taipei, not be included in future editions of the Michelin Guide.

Sébastien Bras, owner and chef of the restaurant Le Suquet, came forward in September 2017, just days before Chiang, that he wished to return his stars (he speaks in French on Facebook Live) and to also not be included in future Michelin guides. In an interview with AFP, Bras said, “You’re inspected two or three times a year, you never know when. Every meal that goes out could be inspected. That means that, every day, one of the 500 meals that leaves the kitchen could be judged.” Indeed, wanting to concentrate on cooking without the pressure of Michelin rankings hanging over his head, would allow Bras to “express his spirit and that of the land, without tension”. The giving back of the stars may not be real but the symbolism is very much felt and acknowledged in the public domain. 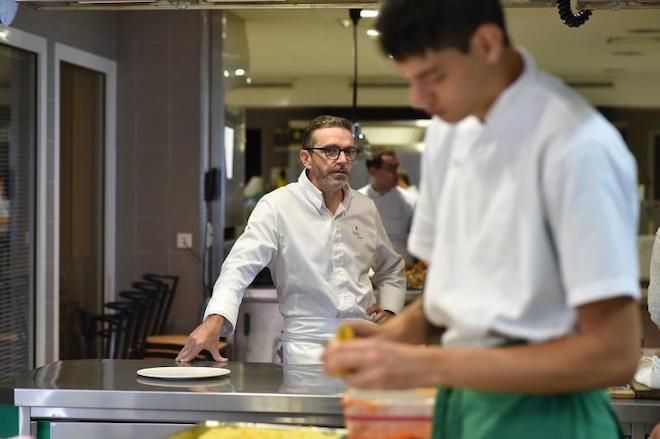 Sébastien Bras, owner and chef of the restaurant Le Suquet

Andre and Sébastien may be the latest, but they weren’t the first and they’re definitely by no means the last. If receiving a star is recognised as the peak of a chef’s career and wanting to return it is symbolic of an expression of wanting freedom from the pressures it entails but for one Bangkok street food chef, the star has been nothing but a curse. 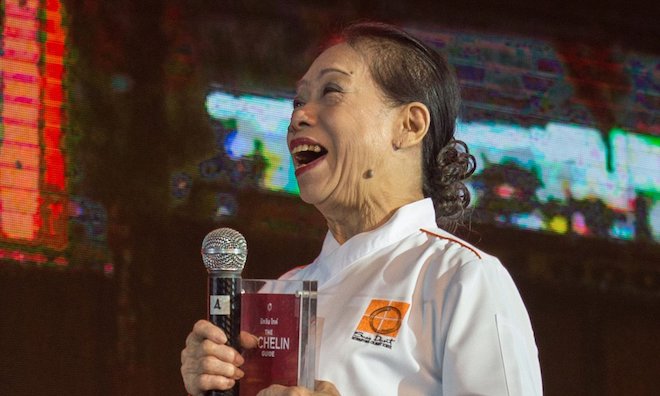 Jay Fai, the cook and owner of a street food eatery in Bangkok, smiles as she accepts the one-star Michelin guide recognition at a hotel in Bangkok on December 6, 2017. Jay Fai’s was the only streetside establishment listed in Michelin’s first-ever Bangkok guide

Foreshadowed by Chiang and Bras, the 72 year old grandmother and culinary genius Jay Fai became a bonafide national celebrity in December 2017 when her little stall on the corner of Soi Samran Rat in the Phra Nakhon area of Bangkok, went from relative obscurity to  nationally recognised after Raan Jay Fai got awarded the first star on the strength of the chef’s famed crab omelette. 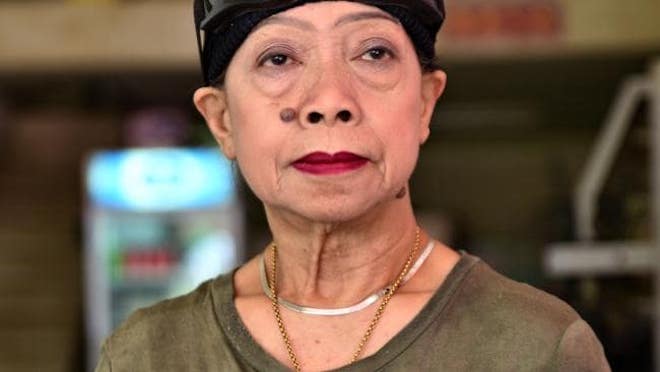 Jay Fai, today, a shadow of her former self, no longer the jovial and conversational

The popular eatery in Bangkok’s Old Town, appeared in the 2017 Guide alongside 13 other one star restaurants and three with two stars, shooting to overnight stardom for being the only street food venue in the city to be honoured by guide rouge. With the award, came the overwhelming attention of foodie-tourists and zealous tax officials, speaking to Eater, Supinya “Jay Fai” Junsuta complained that “Many people come just to see and take pictures and not necessarily to eat,” adding that,”I would have lost customers if I [raised prices].”

Indeed, the double edge of a Michelin Star comes from the implication that such an award means the chef in question has struck gold and made it rich. In fact, she’s been struggling with rising food and storage costs as a result of ever-growing demand, and increased official harassment by government auditors (looking for her mythical millions) as her staff struggled to deal with overwhelming crowds of both customers and the curious. That’s not even factoring  the increased pressure on the chef to maintain their “Michelin Star standards”. 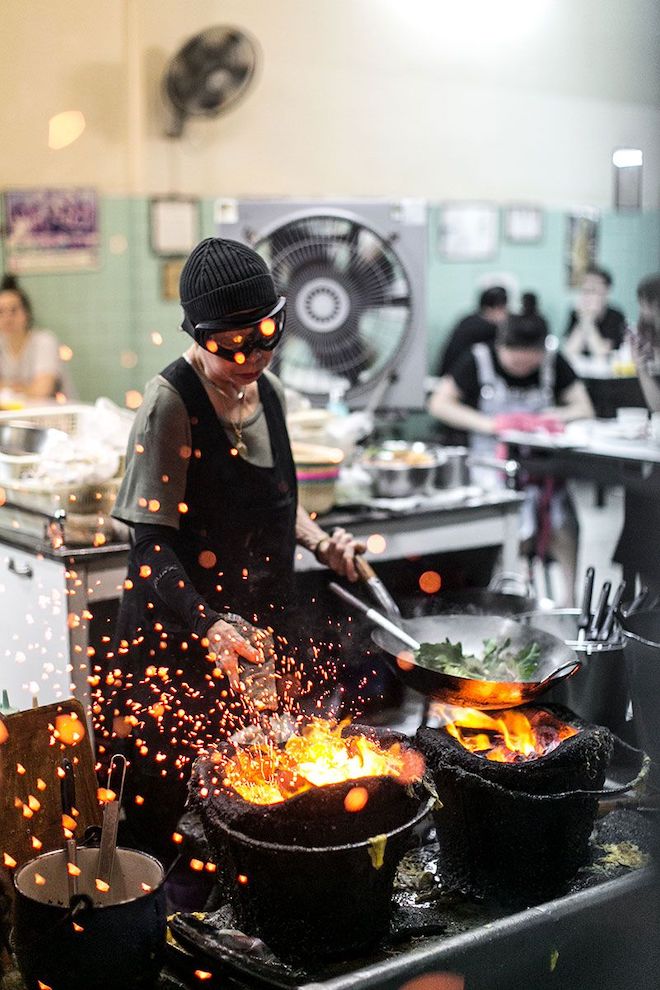 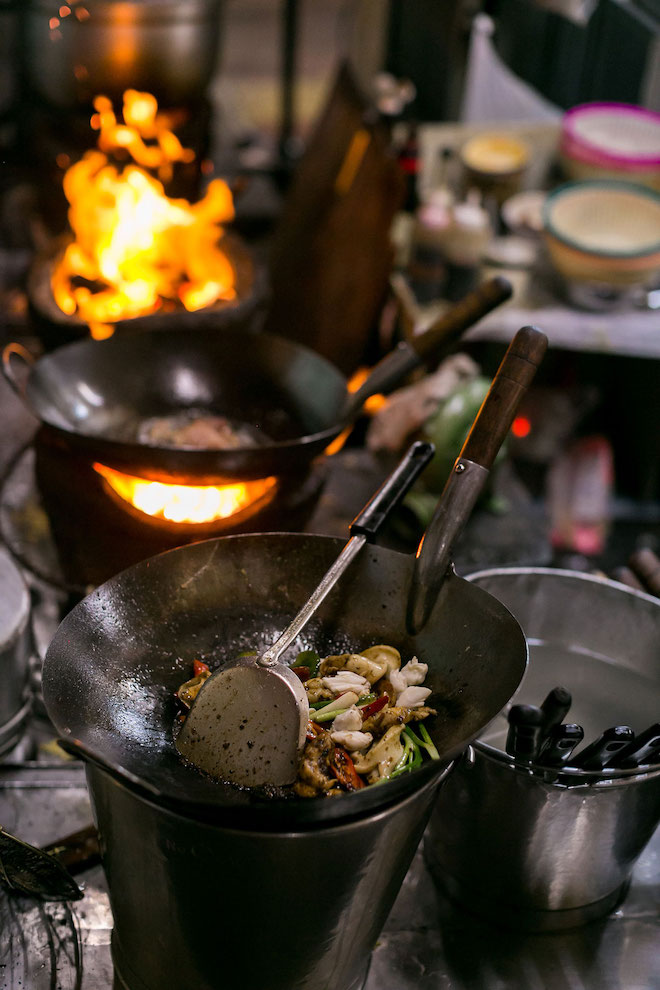 “I know many of the three-star Michelins never change their menu in order to have perfect consistency. It’s basically robotic cuisine; they cannot afford to change, because that was the winning formula…. Emotionally, I’m going to want to cook something else than what I’ve done.” – Chef-owner Daniel Boulud on why the Michelin Star is antithetical to culinary artistry

British celebrity chef Marco Pierre White, recently making Singapore’s Robertson Quay the place for his latest culinary outpost, enjoys two firsts with The Michelin Guide. The youngest chef ever with a restaurant to be awarded three Michelin stars in 1994 and also the first chef to return his stars five years later. White famously told The Guardian, “The people who gave me Michelin stars had less knowledge than me. You have to place a value on something that is given to you: that’s why it was so easy for me to walk away. They had no value for me.” 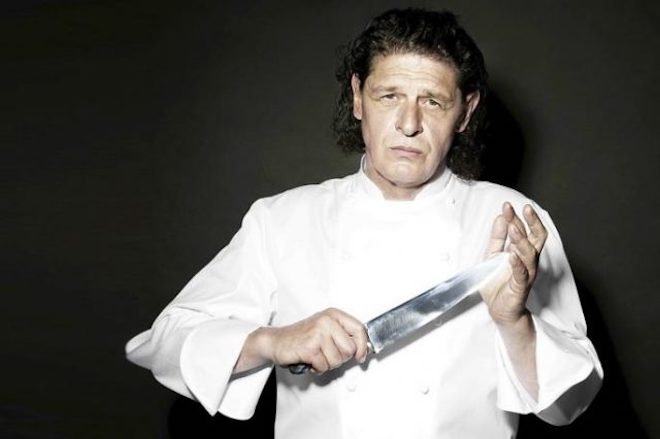 The “Michelin Curse” touches all aspects of the business. Maintaining the “Michelin Star experience” often results  in increased costs related to maintaining the star, better cutlery, better ingredients, better linens, and more support staff. Perhaps Chef Lucas Carton said it best as he returned his three-stars after 30 years, told The New York Times: “I can do beautiful cuisine without all the tra-la-la and chichi, and put the money into what’s on the plate.”

That said, it’s ironic, the greatest damage guide rouge could do to the very industry it hopes to celebrate is best encapsulated by Daniel Boulud who lost one star from his Manhattan restaurant Daniel, was on the grounds of “lacking consistency”. Boulud told Vanity Fair, “I know many of the three-star Michelins never change their menu in order to have perfect consistency. It’s basically robotic cuisine; they cannot afford to change, because that was the winning formula…. Emotionally, I’m going to want to cook something else than what I’ve done.” 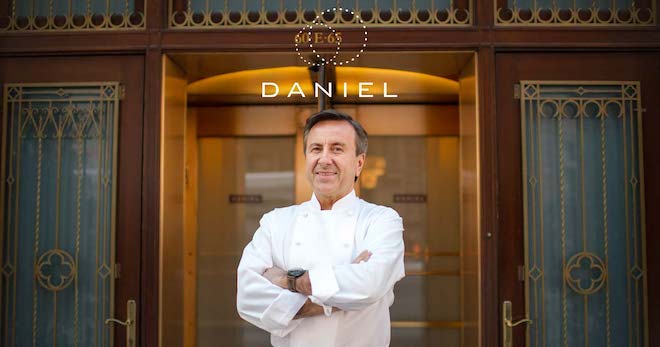 Just how are the culinary arts served when otherwise brilliant chefs, desperate to maintain their stars and standing stick to the tried and true ad infinitum?

Not all Chefs feel the same about the Michelin Guide

Gordon Ramsay has previously criticised chefs for returning their Michelin stars, calling them ungrateful for depriving the rest of the team of the glory of such an honour. The chef might be pivotal in putting a restaurant on the map through their sheer artistry but its the staff that facilitate this opportunity. Ramsay was devastated when his own self-named, three-star London restaurant was recently stripped of two-stars.

Anthony Bourdain, CNN’s globe hopping chef-host of popular foodie series Parts Unknown, is famous for his critical opinion on awards like Michelin Stars and his views tend to be echoed by the majority of culinary experts who have previously been awarded or are rumoured to be in the running for these stars. Marc Veyrat famously lambasted the red book when reviewers mistakenly accused his staff of using cheddar instead of cheese from the region.

The main point of contention is that Michelin Guide’s anonymous reviewers, not being chefs themselves, are not qualified to make critiques of the dishes and their methods of preparation, a sentiment voiced vigorously by Marc Veyrat when he accused the reviewers of “profound incompetence”.  Veyrat’s Haute Savoie restaurant was demoted this year from three to two stars in addition to accusations that he put cheddar cheese in his soufflé as opposed to the regional specialties of reblochon, beaufort, and tomme, which Veyrat felt was more insulting than the demotion, underscoring his perspective that Michelin Guide reviewers might not actually know what they’re critiquing.

There is also a growing issue of a lack of transparency and the perceived arbitrary nature of how stars are awarded or taken away. Case in point: When Chef Alain Chapel passed from a heart attack, Michelin Guide’s editorial director Bernard Naegellen stripped his eponymous restaurant of its third star, on the basis that Chapel was the reason the restaurant had three stars. Meanwhile Loiseau’s own passing saw no such “demotion” of La Côte d’Or. 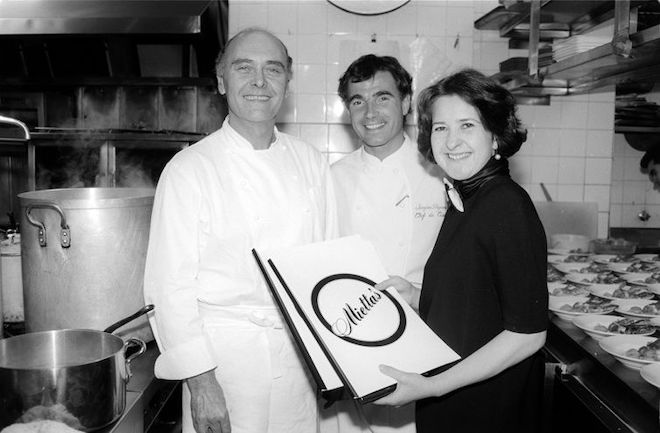 Left: Chef Alain Chapel, his passing saw his restaurant lose one star due to the importance of his contributions

Since the red book’s publication, a total of eight chefs including Marco Pierre White, Sébastien Bras and Andre Chiang have “returned their stars”. Chef Loiseau’s suicide can be partially attributed to the pressure, while Chef Benoît Violier, the French-born chef of Restaurant de l’Hôtel de Ville, was suspected to have succumbed to similar pressures but it was otherwise unconfirmed.

Perhaps White said it best regarding the modern relevance of the Michelin Guide, speaking to journalists in Singapore as he officiated the opening of The English House in Robertson Quay, “They sell tyres. I sell food.”