Vivienne Westwood launches campaign to ‘Save the Arctic’

Vivienne Westwood has called on a slew of stars to support her ongoing Save The Arctic campaign. 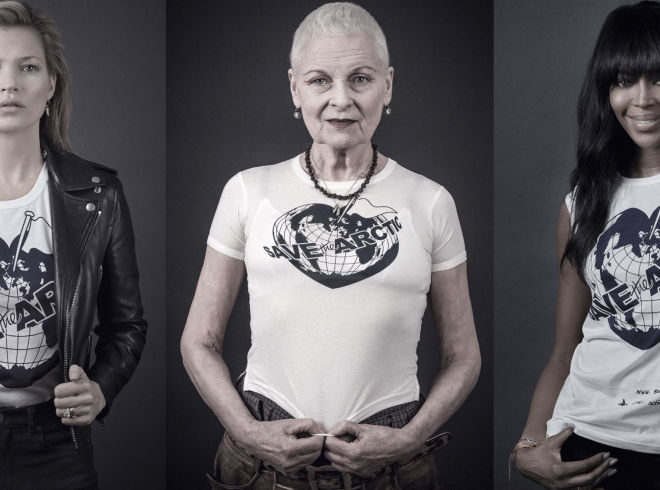 Dame Vivienne Westwood has recruited a host of famous faces including Kate Moss and George Clooney for a new environmental campaign exhibition on now in London.

The British fashion designer has teamed up with photographer Andy Gotts MBE to help him out on the project, titled “Save the Arctic.”

It comprises a series of 60 shots of iconic faces including Pamela Anderson, Stella McCartney, Naomi Campbell, Rita Ora, Dame Judi Dench and Grayson Perry among others. Each celebrity is sporting a Vivienne Westwood-designed “Save the Arctic” t-shirt, with the pictures arranged in gallery format along escalators running up to the London headquarters of oil company Shell, which is due to start drilling in the Arctic this month.

The chic t-shirts are made from organic, unbleached cotton by a cooperative in Peru, and are printed in the UK and certified by the G.O.T.S. (Global Organic Textile Standard). “It was John Sauven’s brilliant idea to exhibit the images in Waterloo — using the escalators as a new art space in London — hundreds of people will be able to see the images,” explains the fashion designer.

“People all over the world understand that the Arctic melting will affect us all. If we’re to save it, the time to act is now.”

She added: “There are 7 million people signed up to Save the Arctic, with global public opinion still growing — we need to continue this momentum until it becomes a torrent they can’t afford to ignore.”

According to the fashion label, the campaign “reflects a growing global call for protection of the unique and fragile Arctic.”

The exhibition runs in London Underground’s Waterloo Station through July 26. Support the cause by buying your t-shirt here.