100 Years Under the Dome at Galeries Lafayette

The Galeries Lafayette department store celebrates the centenary of its legendary dome, inviting for the big occasion Rem Koolhaas and Yann Kersalé. 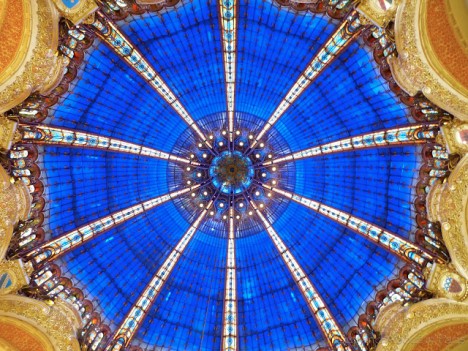 Erected in October 1912 by architect Ferdinand Chanut and master glassmaker Jacques Gruber, the famous stained glass dome is the focus of an exhibit that delves into its origins, coupled with a light installation on the facade of the building.

“Our dome is the symbol of the Galeries Lafayette, illustrating the delicate balance between tradition and modernity that is characteristic of our group since its inception in 1894,” explains Philippe Houzé, president of the board of directors. Set up by Rem Koolhaas end his agency OMA, the exhibit, which opened this week and is titled “1912-2012. Chroniques d’un parcours créatif”, delves into the department store and its iconic dome’s successive mutations.

Running through January 26, 2013, the exhibit is held at the Galerie des Galeries and consists of numerous archival documents including photographs and films.

The light installation, designed by conceptual artist Yann Kersalé in partnership with Djuric Tardio-Archiectes, titled Chrysalide, is a perennial work that will liven up the building’s facade all year long and evolve with each new season.