Karl Lagerfeld has opened his first-ever UK store in the heart of London on Regent Street. 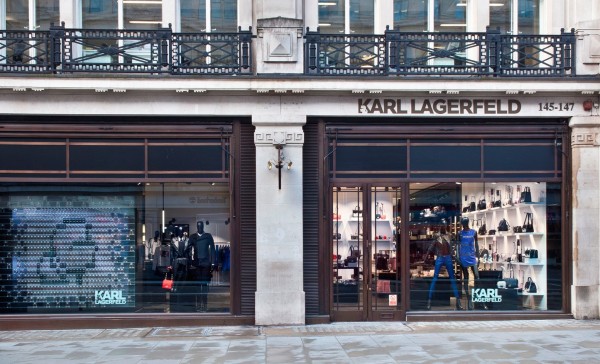 Just days after the launch of his debut men’s and women’s fragrances, Kaiser Karl is at it again. The designer opened the first UK store for his namesake fashion and accessories brand in London, a 2,700-square-foot (250 square meters) space on Regent Street in the city’s West End. It’s the 17th store in the Lagerfeld retail empire, which started with the Fall 2012 opening of his store in Saint Germain on the Rive Gauche in Paris. As you would expect there’s a strictly monochrome colour scheme, enhanced by glossy surfaces, mirrors, faux fur chairs and graffiti-style artwork designed especially for the store by I Love Dust. “Karl is a master of accessorization, and the consumer has responded to that. We have doubled the bags offer from last season in response to demand,” Karl Lagerfeld CEO Pier Paolo Righi explained to WWD. With a celeb-studded bash to celebrate the opening, a British-themed capsule collection is exclusive to the store for now (although it will roll out to the other Lagerfeld locations), made up of Union Jack-emblazoned, Lagerfeld-themed candles, T-shirts, sweatshirts, iPhone covers, and wallets.