Fashion designer Christopher Bailey has been getting into the festive spirit with his latest project — a Christmas tree for Claridge’s hotel in London. 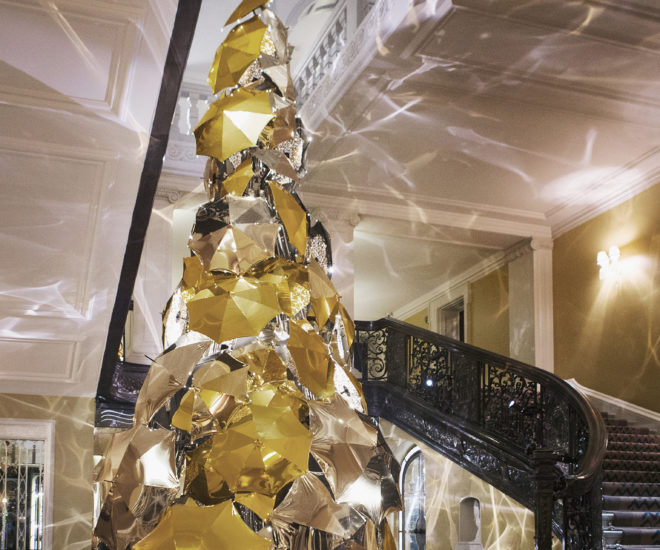 Fashion designer Christopher Bailey has been getting into the festive spirit with his latest project — a Christmas tree for Claridge’s hotel in London.

The Burberry Chief Creative and Chief Executive Officer’s “Claridge’s Christmas Tree 2015” has been unveiled in the hotel lobby, and the result is in striking contrast to the art deco design of the venue.

Exploring the concept of light interaction, the tree draws inspiration from Burberry’s longstanding heritage of providing protection against the elements, and the brand’s history in pushing digital boundaries through its physical experiences. The motion-responsive structure features almost 100 umbrellas, each finished in bespoke gold and silver metallic fabric. It also features the interactive element of 77,000 individual lights, which will be triggered as guests walk by, sending thousands of twinkling beams into the hotel’s lobby.

“It is so wonderful to see the tree in such an incredible setting as part of Claridge’s seasonal celebrations, I hope that it helps to bring guests a sense of festive fun,” said Bailey.

In true Burberry social media-savvy style, the UK fashion house has designed a Snapchat geo-filter that will enable all Snapchat users to frame their snaps with metallic Burberry umbrellas inspired by those on the Christmas Tree. The filter, which launches Monday, will be accessible to all Claridge’s visitors throughout the festive season, and is part of an on-going creative partnership between Burberry and Snapchat.

Claridge’s designer Christmas tree has become something of a festive tradition over the past six years, with previous creatives including Dolce & Gabbana. Christopher Bailey and Claridge’s will be hosting a private event on the stairs of the hotel’s lobby on Wednesday, November 18. Images from that event are here. Burberry also co-hosted an exclusive star-studded party in celebration of the collaboration with Claridge’s. Click to view the story here.