Canadian-American industrial designer Karim Rashid is on a mission to change the world and it is not for money or even greater fame, it is for his mother. 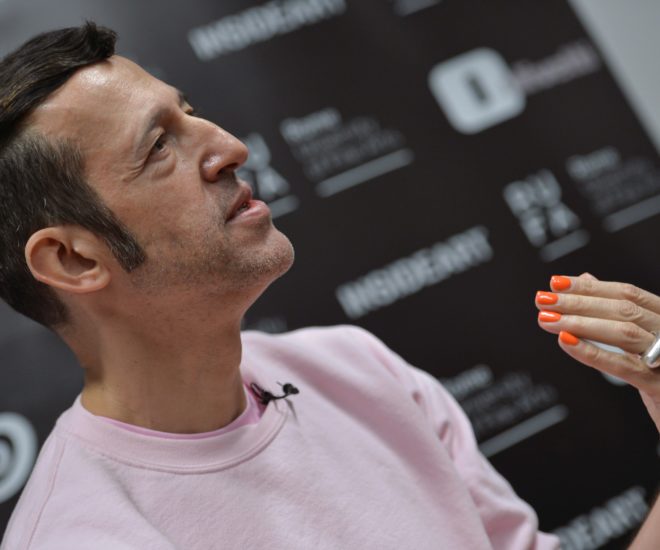 Canadian-American industrial designer Karim Rashid is on a mission to change the world and it is not for money or even greater fame, it is for his mother.

“The world is a mess, it doesn’t work,” the 56-year-old groans as he reflects on his path to global fame and how he can give something back to the woman who raised him.

“We throw function out of the door. I don’t know why. Every hotel I go to, it’s a disaster: the location of the bathroom, the lights,” he tells AFP at Rome’s University of Fine Arts (RUFA).

The man dubbed by Time magazine in 2001 as the “the most famous industrial designer in all the Americas” has designed everything from manhole covers to buildings, and prides himself among other things on having reclaimed the color pink for men.

But for all his prolificness, he is still frustrated by the poor design of ordinary objects, which have a real impact on daily lives – like the family car.

“It is such a simple, simple thing. Like getting out of a car. In 1967 Citroen makes a car where the seat rotated: you get in, you rotate, right? It’s so comfortable.”

Rashid, sporting pink jeans, a pink jumper and florescent pink nails for his appearance as guest speaker at the university, says he was inspired to become a designer by his father.

He was born in Cairo to an Egyptian artist and a British mother and lived in several countries during his youth.

“When I was two years old, we lived in Rome. My father was a set designer for Cinecitta,” the historic film studio in the Italian capital.

“I had a father who was an artist, a painter, but he didn’t stop there. He would every night make furniture for the home because he had very little money, so he would make his own furniture,” says the heavily-tattooed designer.

“Some days he would wake up and make sketches of my mother, design a dress, take the fabric, cut it, sew it and that night go to a party, and my mother’s wearing the dress.

“So imagine if you’re a five-year-old child and you see this. I think you’d become a designer.”

The neon-lover, whose work can be found in more than 20 permanent collections including at New York’s Museum of Modern Art and the Pompidou Centre in Paris, shrugs off critics who say he should stick to home furnishings rather than delving into real estate.

“Architects can design products, but for some reason product designers can’t design buildings. Why not?” he asks.

“I’ve said, for me, designing a mobile phone is more difficult than making a building. And everybody got very upset!”

Rashid designed his first hotel in Athens in 2001, then did another in Berlin in 2008, before being courted by New York developers.

His projects for HAP (social housing) investments in the United States proved controversial and had to be toned down, but he shrugs it off.

“For me it’s not even architecture. It’s like looking at building as industrial design,” he says.