Gold embossed invitations to the royal wedding of Prince William and Kate Middleton have been sent out to 1,900 guests. Gilded invitations issued in the name of Queen Elizabeth II began dropping onto doormats this week after being sent out on Wednesday and Thursday, with the monarch’s EIIR cypher die-stamped in gold. While names of […] 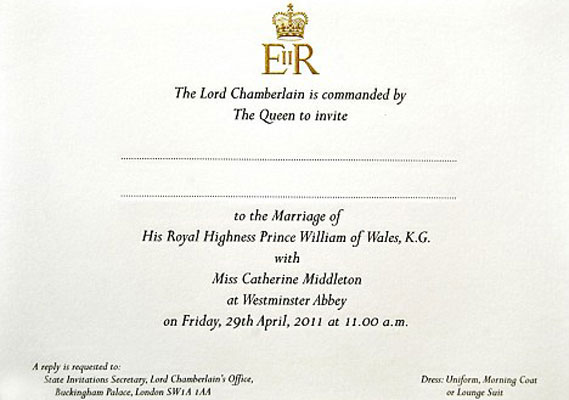 Gold embossed invitations to the royal wedding of Prince William and Kate Middleton have been sent out to 1,900 guests.

Gilded invitations issued in the name of Queen Elizabeth II began dropping onto doormats this week after being sent out on Wednesday and Thursday, with the monarch’s EIIR cypher die-stamped in gold.

While names of the guests were not released, the list of dignitaries due to attend the wedding on April 29 is likely to meet Kate’s expectations that marrying into the royal family would amount to “quite a daunting prospect.”

While British Prime Minister David Cameron has been invited, President Barack Obama and other world leaders will miss out because William is only second in line to the British throne, not the heir, The Sunday Times said.

Relatives of William’s late mother, Diana, have also reportedly been invited, with the guest list set to include her sisters Lady Jane Fellowes and Lady Sarah McCorquodale and her brother, Earl Charles Spencer.

More than 1,000 guests will be drawn from William and Kate’s family and friends, including most likely friends from St Andrews university, where the couple met, St James’s Palace revealed.

The queen and her husband Prince Philip will be at the head of the royal family group filling the pews, along with William’s father Prince Charles and his best man and brother Prince Harry.

Kate’s parents Michael and Carole Middleton will also have front row seats along with sister Pippa, her maid of honour, and her brother James.

However, only 600 people have been invited to a lunchtime reception at Buckingham Palace hosted by the queen, and an even smaller group of 300 will attend a dinner and dance hosted by Prince Charles in the evening.

Guests received the invites in pale brown envelopes in the past few days.

Below the royal cypher are the words: “The Lord Chamberlain is commanded by the Queen to invite [name] to the marriage of His Royal Highness Prince William of Wales K.G. with Miss Catherine Middleton at Westminster Abbey on Friday, 29th April, 2011 at 11.00am.”

Guests are to reply to the office of the Lord Chamberlain, one of the top officials in the royal household, who is overseeing many aspects of the wedding preparations.

About 50 members of the British royal family have been invited — although it emerged this weekend that Sarah Ferguson is not among them — in addition to 40 members of foreign royal families.

These include dignitaries from the Middle East, the Emperor of Japan, the kings of Malaysia, Tonga and Thailand, and members of the royal houses of Spain, Holland, Norway, Sweden, Denmark and Belgium, reports say.

A further 80 guests will be drawn from Prince William’s charities, which include homelessness charity Centrepoint, the Tusk Trust conservation charity and the Royal Marsden Hospital, where Diana was also a patron.

Then there will be 200 members of government, parliament and the diplomatic corps, as well as 60 governors-general and prime ministers from Commonwealth countries, and 30 members of the British military.