Major Tom to Ground Control, we want an encore. Lady Gaga channels Ziggy Stardust, with a little help from Marc Jacobs, at the Grammy Awards. 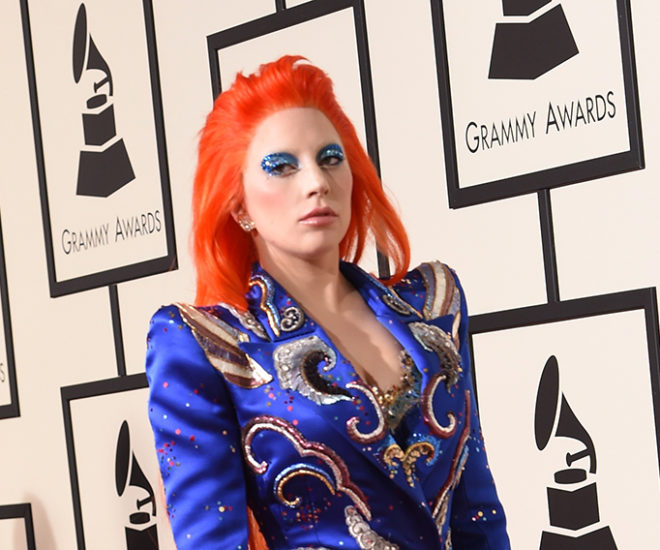 We have to say, we were wondering where Lady Gaga left all her wacky outfits. As much as I have loved the new Gaga, I have to admit missing Mother Monster with her unique sense of style.

Having showed off numerous creations that would have put even Willy Wonka to shame, the talented songstress recently re-visited her treasure trove of designs. Of course, instead of it being a fashion statement, her colorful ensemble was a tribute to the late legend, David Bowie at this year’s Grammy Awards ceremony. Her custom-made royal blue Marc Jacobs coat embellished with silver swirls, was a nod to Ziggy Stardust. Completing the look was her fiery red hair and heavy blue eye shadow. That was just the beginning of her fitting tribute. During the show, the award-winner put up a six-plus minute performance of songs from Bowie’s discography. Gaga managed to earn a standing ovation for her efforts, which saw her also wearing a Bowie inspired ivory jacket and pants — also by Marc Jacobs that were embellished with silver sequins, swarovski crystals to showcase iconic images from Bowie’s career. To top it off, she threw on a light peach feather, metallic organza and paillette boa along with two huge mood rings that would have easily taken someone’s eyes out.

The pint-sized vocal powerhouse proved that she truly was the right artist to pay tribute to someone as imaginative and daring as she is.

The image featured in the article is from AFP.