A rare musical score written by classical great Gustav Mahler went on show in Hong Kong Wednesday ahead of a landmark auction by Sotheby’s. 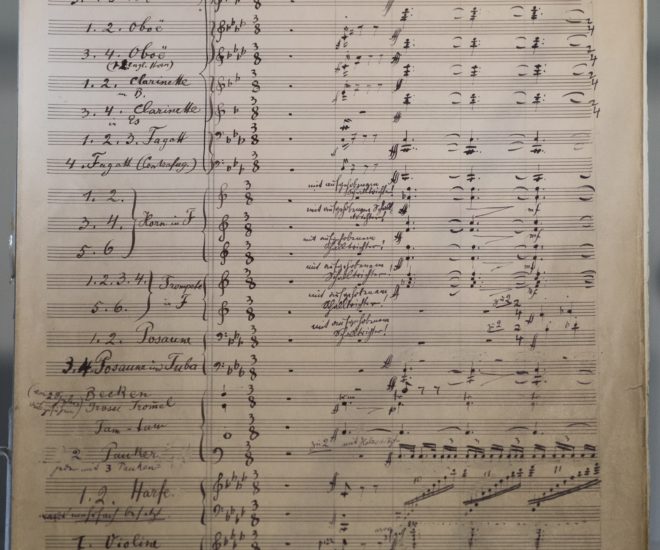 A rare musical score written by classical great Gustav Mahler went on show in Hong Kong Wednesday ahead of a landmark auction by Sotheby’s. It just might be the world’s most expensive musical manuscript.

The hand-written complete version of Mahler’s lauded “Resurrection Symphony” will go on sale in London later in the year with a £3.5 million ($4.5 million) price tag — the highest ever estimate for a musical manuscript, according to the auction house.

The 19th century Austrian composer and conductor wrote 10 symphonies, but Sotheby’s said none had ever gone under the hammer in its entirety.

“No complete symphony by Mahler, written in the composer’s own hand, has ever been offered at auction, and probably none will be offered again,” said Simon Maguire, senior specialist in books and manuscripts at the auction house.

“This is a once-in-a-lifetime opportunity to acquire a manuscript of truly outstanding historical importance.”

Among the first visitors Wednesday was Anthony Cheng, co-founder of the Mahler Society of Hong Kong, who said the complete set was made particularly rare because it has Mahler’s conducting notes written across the margins.

“It’s not easy to see a complete symphony written by him or the complete set (like) we can see here,” he told AFP, adding that he believed the manuscript would hit its asking price at auction.

“Mahler is the bridge between late romantic music and 20th Century music… and his influence is still felt in the 21st Century today,” he said. “He is an icon in both conducting and composing.”

Sotheby’s said the manuscript was being offered by the estate of the American economist and businessman Gilbert Kaplan, who became “infatuated” by the work, also known as Mahler’s Symphony No. 2.

Kaplan went on to conduct the symphony himself with some of the world’s greatest orchestras before his death in January this year.