Expectations were certainly high but by the time the hammer fell on Wednesday night, the Land Rover Defender came through, raising £400,000 (US$598,440) 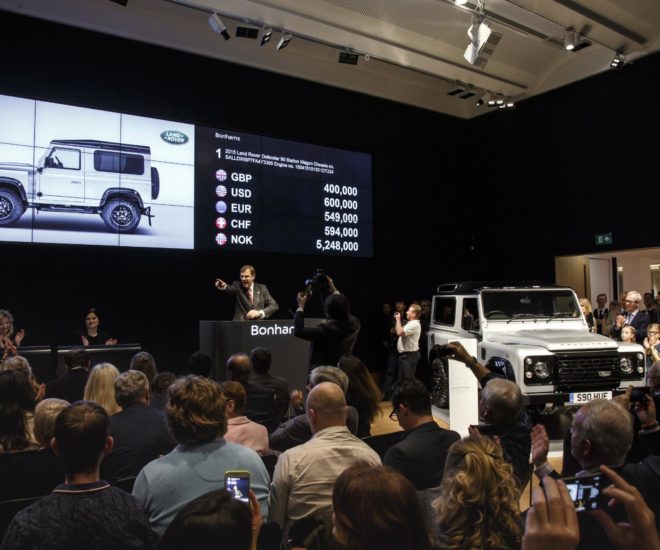 Was there ever any doubt that the unique Land Rover Defender would sell for an incredibly high price at Bonhams on December 16? Expectations were certainly high but by the time the hammer fell on Wednesday night, the Defender came through, raising £400,000 (US$598,440) including buyer’s premium. To add a little perspective on that, that princely sum is enough to buy a Ferrari and a Bentley and have enough change left over for a Porsche 911, or, for the more adventurous, 17 standard Land Rovers.

However you slice it, the sale makes Edition 2 Million, built to mark the end of the iconic Defender’s production in January – after 67 years – the most expensive as well as the most exclusive production Land Rover ever to be sold at auction.

Robert Brooks, Bonhams Chairman, said: “It’s a great privilege for Bonhams to have been selected by Land Rover to offer this historically significant, one-of-a-kind Defender at auction. Following spirited bidding, the gavel finally fell to a delighted bidder on the telephone, achieving an excellent six-figure sum for two wonderful charitable causes.”

Mike Adamson, Chief Executive of The British Red Cross said: “We are extremely grateful to Land Rover for so generously donating half the proceeds of the sale of this one-off vehicle towards our work in Nepal. The Red Cross has used Defenders in humanitarian work and relief efforts in the UK and around the world since the early 1950s and has benefited from Land Rover’s support on many occasions through vehicle donations and loans. This vitally important project in Nepal – the 18th supported by Land Rover – will improve the lives and livelihoods of thousands of people and communities.”

Edition 2 Million was designed by Land Rover’s Special Vehicle Operations (SVO) division and features a number of unique, bespoke details including a map of Red Wharf Bay engraved into the aluminum fender. This beach is where, with the aid of a long stick, the sketch for the very first Land Rover was made.

Inside, the image is repeated as embroidery on the black leather seats and a special dashboard plaque denotes the car’s bespoke credentials.

But what truly sets the vehicle apart from other Defenders is that it was put together with help from the company’s ambassadors. Adventurers, entrepreneurs, members of the charities that depend on it, plus Stephen and Nick Wilks, sons of the founders of Land Rover, helped to assemble the vehicle’s parts on its Solihull, Birmingham production line.

As such, it’s a fitting tribute to what is regarded as the world’s first true SUV. Once production ceases in January, there will be a huge hole in the Land Rover lineup. A replacement for the Defender is on its way, but development is proving challenging. After all, how do you replace an icon?