Limited edition pieces from Hermès and more up for grabs at the Paris Auction. 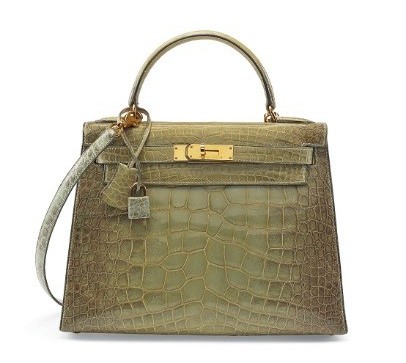 Christie’s third annual “Handbag & Accessories” auction in Paris is coming up March 5 with an enthralling lineup for arm-candy connoisseurs seeking rare or special edition gains. Pieces from Hermès, Chanel, Dior and Louis Vuitton are expected to fetch prices ranging from €2,000 to €70,000.

The “Vert Celadon Natura Kelly 28” by Hermès is one such key highlight. Being offered at a rather conservative estimate of €15,000-20,000 (approximately $17,000-22,000), the style is a nod to old processes where the original skin-color was left on handbags made from exotic skins, because the pigment couldn’t be removed in those times. Hermès sought to bring back the process, this time for the animalistic flavor rather than necessity, around the year 2000. In any case, this is one of the main pieces to watch for when the hammer goes up at Christie’s.

Another eye-catching piece is the “Himalaya Birkin 35”. Once vaunted as one of the most expensive handbags for sale, the dyeing process for the design, invoking the grandeur of the Himalayan Mountains, was said to take long and tedious hours to complete. It’s being offered at €70,000 – €90,000 in the auction. Another variant of the “Birkin 35”, from the So Black collection, is estimated as between €40,000 and €45,000. This version has a shiny black plating as opposed to the usual gold or palladium sheens.

Other important Hermès examples includes a Kelly Picnic 35, made in barénia leather and wicker, and a custom-ordered Kelly 32 in Bleu Saphir, Bleu Marine and Bleu Jean alligator.

To celebrate its 10th Anniversary in another city (Dubai), another Christie’s auction March 17 will feature handbags, trunks, watches and jewelry. Star pieces of that show includes a “Grand Marriage Kelly 32” in ostrich, alligator and lizard, as well as a custom-ordered “Birkin 30” in anémone, rose confetti and bleu aztèque.