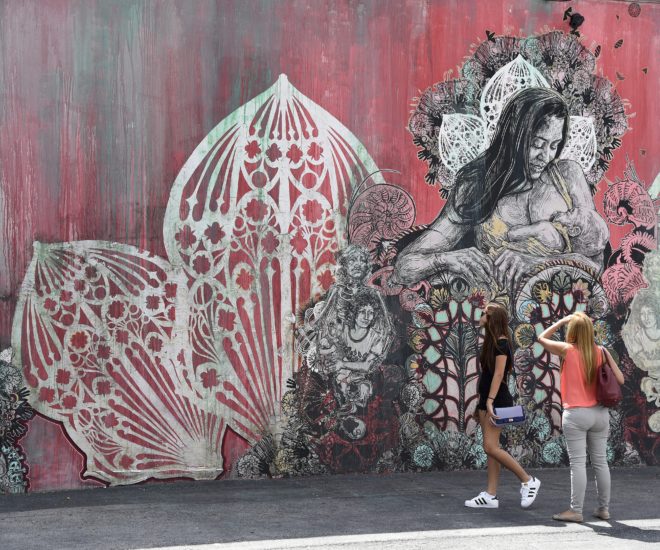 Forbes named Wynwood in its list of “America’s Best Hipster Neighborhoods.” Vogue dubbed it one of “the world’s coolest neighborhoods.” Believe it or not, it used to be a downtrodden warehouse district. Today, it is home to 70 art galleries and 20 restaurants. So how did it transform from a district of windowless factory houses to an open-air art gallery?

The alchemy lies in buying up a critical mass of properties and having a vision to revitalize a derilict neighborhood while respecting its character. This was Tony Goldman’s idea, the mastermind behind the makeovers of New York City’s SoHo neighborhood in the 1970s and Miami Beach in the 1980s. In 2006, his real-estate company, Goldman Properties, started purchasing properties in the area.

“It’s part of our model, where we buy a critical mass of real estate. Usually 18 is the minimum because that’s what you need to really make a change,” said Jessica Goldman Srebnick, who became chief executive after her father’s death in 2012. As it gentrified, rents skyrocketed, going from $3 to $6 per square foot to between $65 and $95 today.

Wynwood is the playground of many artists, including internationally renowned ones. “We invited the greatest street artists in the world to paint the canvases of our buildings.” said Goldman Srebnick.

One example is Wynwood Walls, a warehouse-turned-art showcase, which greets visitors with a mural by Shepard Fairey. Fairey is the celebrated artist of the “Hope” poster for Barack Obama’s 2008 presidential campaign.

“Wynwood has been an amazing place for art,” said muralist Chaz, 41, a member of the British-based duo The London Police. Other murals feature the works of Japan’s Aiko, the Chilean Inti, France’s Miss Van, and Ron English.

Goldman Srebnick added that her company never intends to change the soul of the neighborhood, which is in its street art. “It’s about looking at what is there, and just improve it and see what it could be at a more advanced level.” she said. Behind her at Wynwood Walls is the Fairey mural portrait of her father, smiling, his hands extended in welcome against a backdrop of golden beams.

“One of the things my dad taught me was to see things how they could be, as opposed to what they are,” said Goldman Srebnick. “You might see crime, dilapidation and rundown neighborhoods. Someone else can see the opportunity and the tremendous possibilities.”

“Here people can walk through this living, breathing museum. They can touch it. They can explore it. They can come up close. It’s a very different experience to what people are used to with art.”