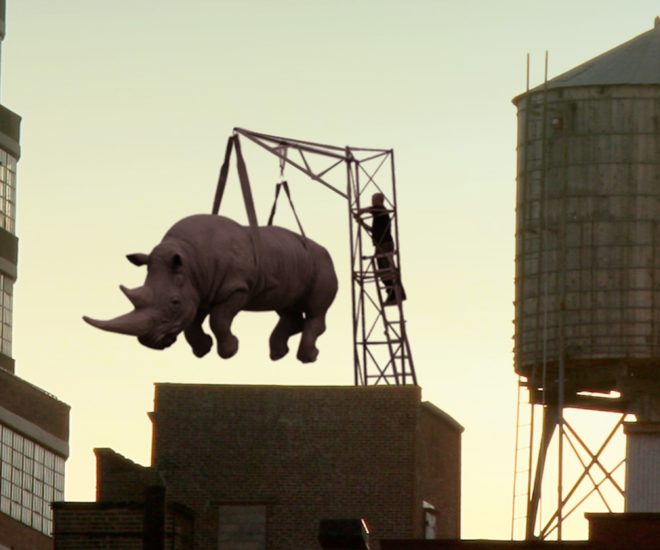 Stefano Bombardieri is an artist who brings large safari animals to the streets. Rhinoceros, elephants, crocodiles, gorillas, hippopotami are just some of the massive creatures he features in his work. Bombardieri’s interest in large things doesn’t stop there. The artist has also included sumo wrestlers, large mythical creatures and container trucks in his body of work. Exhibited on the streets or large gallery spaces, Bombardieri is known for his enormous sculptural installations and enormous subject matters. As a conceptual artist and sculptor, his figurative sculptures often show these large animals and creatures estranged in confusing and somewhat humorous situations, be it a rhinoceros hanging in mid-air, a leviathan dragged by a child or a container truck crashed into a museum.

Born in Brescia, Italy in 1968, Bombardieri’s interest in sculpture started at an early age from spending part of his childhood working in his father’s workshop. His father, Remo Bombardieri, was a sculptor and it was in his workshop that Stefano began experimenting with different artistic techniques and materials. His exposure to the world of art from a young age led him to be inspired by the great Italian masters Boccioni and Balla, artists of the futurism movement, and also avant-garde artist Piero Manzoni.

Bombardieri was influenced by their figurative approach to creating art, and used this approach to advance the concept of his original work. His works were highly influenced by the hyperrealism of these artists’ creations. Hence, he became interested in large-scale objects. Large mixture of tools and artistic media, like video-installations, are recurring traits in his artwork. Although the animals play a large role in his creations, his search is mostly anthropocentric and puts man at the center of reflection. Each animal is supposed to be a metaphor of human existential complexity. The emphasis on heavy objects or the weary animals awkwardly placed in urban settings are Bombardieri’s representation of two worlds that don’t belong to each other, and that struggle to co-exist. Like these weary animals he portrays, humans can identify with emotions linked to being tired after a long journey, or being isolated in their clumsiness.

Until today, he continues to work on the figure of the rhinoceros, which he considers his alter ego. By varying the sizes and contexts in which he situates his rhinos, viewers will get to explore the multi-faceted character of the animal, and identify with the complex emotions and nuanced symbols portrayed in his presentation of the piece. His rhinoceros pieces such as ‘Monumentali’, where the rhino is burdened by heavy loads, ‘Il Peso Del Tempo Sospeso’, a suspended rhino, and ‘Carichi Sospesi’, a dissembled rhino sculpture placed on scaffolding, are a few examples of such work.

For one particular rhinoceros sculpture titled ‘Monochesimo’, which he showcased at the 54th Venice Biennale, he wanted to create a protective shell-like structure that became an interactive housing area that visitors could walk through. It was second nature for him to think of an enclosed space where people could go and find a place to meditate. The head of the rhino became an area protected by leathery armor, and visitors were allowed to walk through a tunnel created in the head of the rhino until they saw light. This is meant to represent the spiritual awakening the common person seeks to experience in life. Above all, his subjects are born out of his philosophical approach to art. He specifically explores the notion of pain, especially the pain present in Western culture. In an interview with Anna Lisa Ghiradi, Bombardieri describes how he creates art as a salve to his pain, and has used his art to reflect the trauma and pain in his life, so as to connect with others sharing the same pains. In addition to imbuing his work with intrinsic meanings, he strives to share an experience with his viewers that they can identify with when they come into contact with his sculptures.

Bombardieri has always been concerned with the dialogue between his sculptures and its urban environment. His shows have been showcased mainly in public spaces, town centers, and other interesting exhibition spaces in places such as France, Greece, Italy, Austria, Belgium Turkey, Monaco, Switzerland, and Germany. He now alternates between working in Italy, France and Germany.

Through a final appropriation of the expressive possibilities of materials that are extremely malleable like fiberglass, Bombardieri creates voluminous and amazing life-sized sculptures that are linked to ideas about time, heaviness and suspension. To Bombardieri, art is not aimed at pleasing or at supplying answers. On the contrary, it is meant to produce questioning and to provoke thought. His works take us by the hand, with apparent lightness, to inspect the relationship between reality and fiction, and the powerful language of art.