A missing piece of a painting by Belgian artist Rene Magritte has been discovered in a concealed under one of his other works, ahead of a major exhibition. 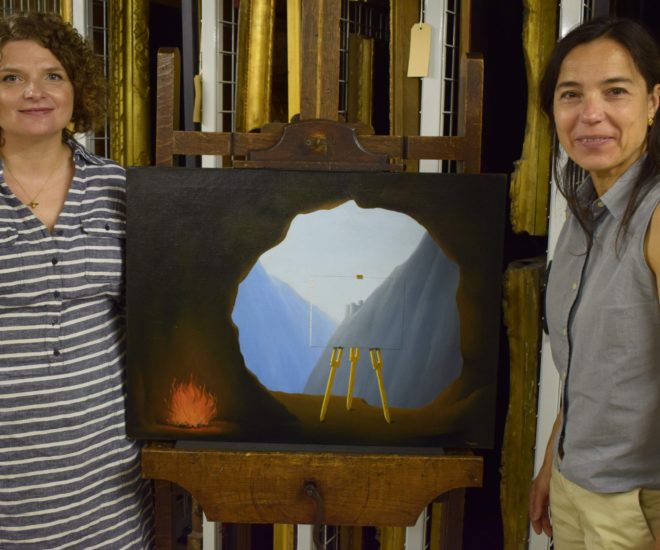 A missing piece of a painting by Belgian artist Rene Magritte has been discovered in a small museum in eastern England, concealed under one of his other works, it was announced last week.

Experts at Norwich Castle Museum and Art Gallery found the lower right quarter of “La Pose Enchantee” (The Enchanted Pose), which had until three years ago been thought lost, underneath “La Condition Humaine” (The Human Condition).

The first two quarters of the 89-year-old painting, which was only known by a black and white photograph, were discovered in 2013 under works by Magritte held in New York and Stockholm.

“All we need to discover now is where the fourth and final, upper-right-hand quarter is. Then this exciting art world jigsaw puzzle will be complete,” said Giorgia Bottinelli, curator at Norwich Castle.

“La Pose Enchantee” is a large painting showing two near identical female nudes, which was first exhibited in 1927.

There was correspondence relating to it in 1932, when it was returned to Magritte, but neither he nor anyone else mentioned it again. He died in 1967.

Then in 2013, conservationists at the Museum of Modern Art in New York discovered the upper left section of the missing work lay underneath their 1935 Magritte “The Portrait”.

The revelation prompted the Moderna Museet in Stockholm to examine one of its Magritte paintings, 1935’s “The Red Model” — which turned out to be the lower left quarter.

It is thought that the artist decided to cut up his painting and re-use the four canvases in preparation for a major exhibition in 1936.

“It seems that for some reason, Magritte must have decided to cut the painting into quarters, and then painted four completely different paintings over the top,” Bottinelli said.

“So our painting ‘La Condition Humaine’ has in fact been successfully hiding part of ‘La Pose Enchantee’ for more than 80 years.”

The clue to the hidden paintings lay in the edges of the painting which were, unusually for Magritte, painted over and round the stretcher.

Norwich conservator Alice Tavares da Silva spotted the discrepancy while examining the painting for an exhibition of Magritte’s work in Paris starting on September 21.

“It was a hugely exciting discovery so I immediately arranged to take the painting to the Hamilton Kerr Institute, at the University of Cambridge to be x-rayed and analysed,” she said.

“The results confirmed my initial observations that ‘La Condition Humaine’ was indeed the lower right-hand quarter of the missing painting.”