A Brazilian graffiti artist and his team race against time to complete the massive graffiti art before the Olympic Games commences next month. 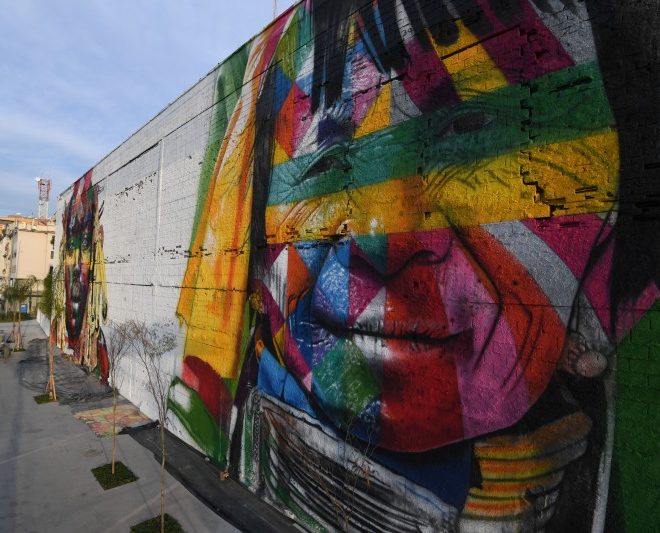 The clock is ticking for Eduardo Kobra and his team, as they race to finish their sprawling 3,000 square-meter masterpiece on a wall in Brazil’s newly overhauled port district before the Rio Olympics commences on August 5.

Once considered an act of vandalism, the graffiti artist’s work of art is anything but – the meaningful mural sees five indigenous faces that represent the continents of the world, in the colors of the Olympic rings, no less. Asia, represented by the Karen people (Myanmar/Thailand), is joined by the Huli of Papua New Guinea (Oceania), the Tapajos of the Brazilian Amazon (the Americas), the Chukchi of Siberia (Eurasia) and finally the Mursi people of Ethiopia (Africa).

Kobra’s intention served to highlight the growing disparity between races around the world. “Look at Europe, where people are rejecting refugees, rejecting what is different. I hope this mural, in the Olympic spirit, will help remind us that we are all different but all one: the human race.” We have featured Kobra’s work elsewhere and we have high hopes for the finished painting.

The hardest part, however, wasn’t the painting, but the preparation. He and his team spent more than a fortnight preparing their canvas by plugging the walls of the former shipyard and rendering it white. It has since taken them 11 hours a day for a week to cover the wall with the help of 2,000 bottles of spray paint, 200 liters of acrylic and 100 cans of varnish. Kobra, who grew up honing his craft on his neighborhood of Campo Lindo in Sao Paolo, however, was undaunted by the mammoth task and instead relished it. From the age of 12 years old, “the street was my way to socialize, have fun and also protest against social exclusion,” he said.

You won’t catch him commissioning illegal work anymore though. The Brazilian native only tags the walls with permission now, including his current work “We Are All One”, which is sponsored by the Rio 2016 organizing committee and city hall.

This story was written in-house, based on an AFP report and an image from the same.