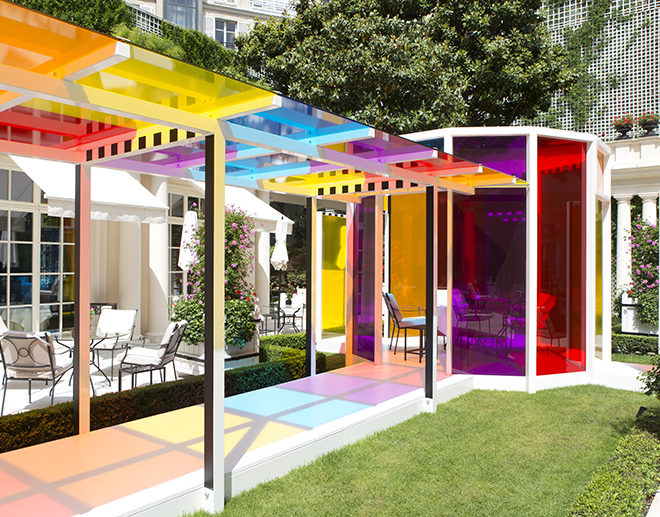 From now until October 6, Le Bristol Paris will host a colorful pergola by Daniel Buren. The installation can be seen opposite the hotel’s triple Michelin star restaurant, Epicure, and is made up of five colours that are arranged alphabetically.

The structure that was created just for the garden, takes the place of the climbing plants and flowers that usually line the path of a traditional pergola. The beauty of the artwork comes to life, as the sunlight shines and moves across the panels that hang overhead and the play of colors is reflected around the gardens in various ways. The one-of-a-kind pergola is the result of a collaboration between Le Bristol and Galerie Kamel Mennour. Along with the pergola, the hotel will also feature an installation by Hicham Berrada in the hotel’s bar where ethereal videos are projected onto a giant mirrored screen. The project named “Le Bristol x Kamel Mennour” is hardly the first time that the hotel has opened its doors to installations. Other well-known artists who have been featured in Le Bristol over the last three years include Ai Weiwei, Anish Kapoor, Pascale Marthine Tayou, Hans Op de Beeck and Gianni Motti.

Daniel Buren, who along with Berrada is represented by Galerie Kamel Mennour, has been known since the ‘60s for creating pieces that combine white and coloured stripes that are featured in private and public spaces. Back in 1986, his installation named “Deux Plateaux” — also known as “Colonnes de Buren” was installed in the inner courtyard of the Palais Royal in Paris. Hicham Berrada, is a young artist who trained at the Ecole Nationale Supérieure des Beaux-Arts in Paris. He enjoyed a residency at the Villa Medici in 2014 after his first monographic exhibition at the Palais de Tokyo in Paris in 2013.