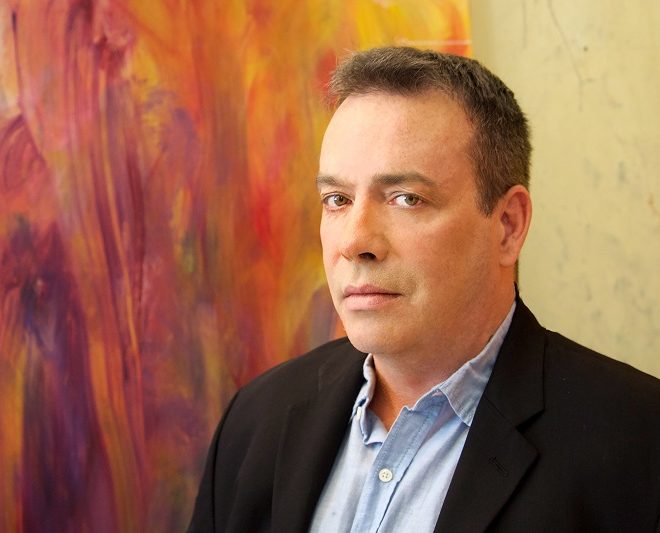 Frank Holliday (b. 1957) is a painter, notably of the neo‐expressionism and neo-abstraction movements, who gained popularity in the New York art scene in the 1970s and 1980s, and is often associated with the East Village and Club 57 scenes. Originally from North Carolina, USA, Holliday has worked and exhibited with other prominent artists of his generation including Andy Warhol, Keith Haring, Jean-Michel Basquiat, Ann Magnuson, Kenny Scharf and Donald Baechler, among others.

Holliday studied at San Francisco Art Institute, at the New York Studio School and at the School of Visual Arts, receiving his Bachelor of Fine Arts in 1979. He has exhibited with many globally renowned galleries such as Kenny Schacter Gallery, Tony Shafrazi Gallery and Partners & Mucciaccia; he has been represented in numerous group shows including shows at The Arts Club, White Columns and Club 57 with Keith Haring; his work has been the subject of reviews by Holland Cotter and Stephen Westfall in Art in America, Grace Glueck and Ken Johnson in the New York Times, and Bill Arning in the Village Voice; and he has received awards from the National Endowment for the Arts (1986), the Gottlieb Foundation Fellowship (2010), the Pollock Krasner Foundation Fellowship (2010), and the Fellow of the John Simon Guggenheim Memorial Foundation (2015). Brilliant and revolutionary, Holliday’s paintings are part of numerous collections all over the world including the United States, Europe, Japan, Australia and Mexico; also American and European institutions and private collections including the Rooseum, the Vilcek Foundation and Heiner Friedrich Collection. Most recently, his paintings found homes in many private collections here in Asia through a solo exhibition with Partners & Mucciaccia, Singapore. The gallery brought Holliday to Singapore, as well as Asia, for the first time in the artist’s life back in September 2015; they presented 41 paintings by Holliday, some of which have never been shown publically before. Although these paintings acknowledge the Western tradition of abstraction, they are equally influenced by contemporary life and are of a singular vision, bridging the gap between high and low art, which has become the signature style of the artist.

“The paintings of Frank Holliday are transporting. With their lush brushstrokes and voluptuous palette, their suggestive depths and their surface sensations of bodily presence, these are pictures that pulsate with living forms and credible atmosphere. They manage to do all this while sparing us the specifics of actual landscape representation. They are abstract while exuding sensations of landscape,” says American art critic, art historian and curator David Cohen.

Art Republik sits down with a very honestly candid Holliday during his visit to Singapore.

What is the one thing about Singapore that has caught your eye?

The fusion of nature and architecture, especially the colonial aspects. It’s such an interesting mix. It feels like the future, but yet the past is still present. Did you ever see ‘Blade Runner’? It’s like that, where the past is a continuum.

How was it like being part of the East Village scene? And the difference then and now.

All those people are dead (laughs) – Keith Haring, Andy Warhol, Jean-Michel Basquiat – but I survived. Not sure how I did. God maybe?

What was it like working so closely with Keith Haring?

Keith always believed in me, and I always believed in him. I met Keith in school, and he really responded to my work. Then I started Club 57 with a couple of people – you know Club 57 was just the basement of a church that we rented for $25 a month – and SoHo wasn’t letting us in, the Mudd Club wasn’t letting us in, so we all got together and put on a show – performance, theatre, art shows; it was a product of our cultural generation.

I was doing black at the time, and Keith that motherf**ker was doing his day-glow crawling babies and it was just Keith’s time. I made my work and I showed with all those guys… but I also felt like Keith only had 27 years to live, Jean-Michel only had 27 years to live – I’m almost 60. Keith is a great artist. I had to learn to love him and watch him become a superstar… and then watch him die – it was not easy.

In your words, what are your paintings about?

The deeper sense of what it is to be alive, to be a human being, to be vulnerable, to evoke emotion in the viewer; the paintings themselves are not emotional but yet if I can make somebody open up, they can respond to the emotion so they can have a part in the paintings. They’re about telling people that they are great. It’s about the moment. And I think after all the death and everything that I’ve lived through, I had to ask myself what does it means to be alive? Is it the light that falls across your lover in the morning and only you get to experience it and it means everything? Or you walk around the cover and that beautiful light that’s beyond you is so amazing but then you look at your watch because you have an appointment, and you look back and it’s gone – so that fleeting moment. Now that I’m older, I realised my life has had some incredible moments but then it passes away. And so for me, my paintings are to remind people that the world may be ending, but isn’t it glorious?

Also I wanted to make the paintings that you weren’t allowed to make at art school because you couldn’t write a dissertation about them. I really wanted to get on that edge of: Why is it that there are so many Monets on a coffee cup? Why are we not allowed to respond to that? My paintings are like that, they are subversive that way. In the same sense, that’s why I like Jeff Koons’s work, because he is authentically Jeff Koons, and his works are so shiny and beautiful, and I could fall into them and lose myself. Similarly with Andy Warhol, there was an authenticity to what he was doing, whatever form it took, there was a truth there. I’m taking the paint subversion of painting and subverting that into the pop elements of my paintings, forcing you to deal with something beautiful, and something pretty… pretty, pretty.