Tintin Gets A Museum

The HergÃ© Museum has officially opened in Louvain-la-Neuve, a small town near Brussels, Belgium. The museum is dedicated to the work of HergÃ© (Georges Remi), who created the Tintin comic-books. The hero of the series is Tintin, a young Belgian reporter. He is aided in his adventures from the beginning by his faithful fox terrier […] 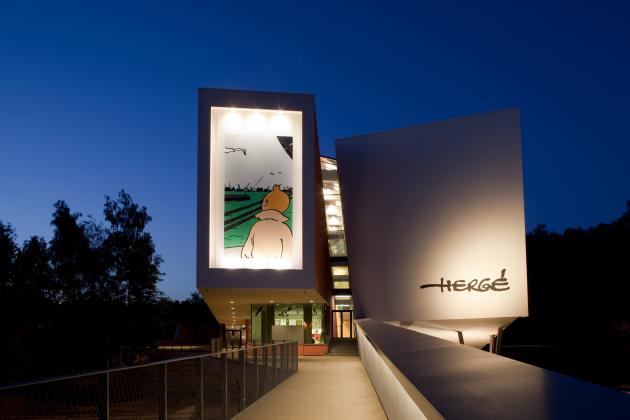 The HergÃ© Museum has officially opened in Louvain-la-Neuve, a small town near Brussels, Belgium. The museum is dedicated to the work of HergÃ© (Georges Remi), who created the Tintin comic-books.

The hero of the series is Tintin, a young Belgian reporter. He is aided in his adventures from the beginning by his faithful fox terrier dog Milou (Snowy in English).

The first adventure was published in 1929. Over 200 million copies have been sold worldwide. Even today Tintin and Snowy are making waves in recently translated Chinese copies in Asia. Unfortunately the masterful HergÃ© passed away in 1983 but thanks to the new HergÃ© Museum in Brussels, its not too late to pay hommage to his work.

This museum is best seen at nightfall or under grey skies, says its architect, Christian de Portzamparc. Over the years, HergÃ©â€™s artistic output has become established as a work of distinction.

The idea of a museum had been germinating from as far back as 1979, while he was still alive. The goal was always to make HergÃ©â€™s myriad creations known to the wider public.

To do justice to such an important project, a lot of time and careful reflection was necessary. The main task was to strike the right balance between the nuances of a complex reality and the legendary status that was starting to develop around the man and his creation.

In 1986, three years after the artist passed away, the idea took shape in the form of the HergÃ© Foundation.

From the start of the new millennium, this organisation (now renamed Studios HergÃ©) has worked tirelessly to identify and catalogue the most suitable elements for exhibition in a museum consecrated to HergÃ©.

On 10 January 2001, Tintinâ€™s â€˜birthdayâ€™, the important announcement was made: the HergÃ© Museum was to be built in Louvain-la-Neuve, a recently created university town, less than 30 kilometres from Brussels.

Eight years later and the dream came true. The HergÃ© Museum opens its doors at the start of June 2009, two years after the first stone was laid on 22 May 2007, the artistâ€™s birthday.

Expectations are as high as the project is ambitious. A well-known architect was chosen to bring the industrious plans to fruition: the Frenchman Christian de Portzamparc. In recognition of his achievements, in 1994 he was awarded the Pritzker Prize, the most prestigious accolade in international architecture.

De Portzamparc has used all his skills in building design to integrate the principals of HergÃ©â€™s work, superbly highlighting the unique features of the latterâ€™s art, which led to his becoming the founder and master of the clear line technique.

Tintin first saw the light of day on 10 January 1929, in the pages of Le Petit VingtiÃ¨me, the weekly childrenâ€™s supplement to the daily paper, Le XXe SiÃ¨cle.

The Adventures of Tintin are still as fresh and exciting today as they have ever been, inspiring artists, writers, and directors in both the theatre and cinema. Tintin embodies timeless values that appeal to humankind worldwide.

His captivating escapades are the result of a unique combination of gripping narratives, sublime â€˜clear-lineâ€™ graphics and universal themes.