One of the most iconic images in art history – Edvard Munch’s “The Scream” – has become the most expensive artwork ever sold at auction. 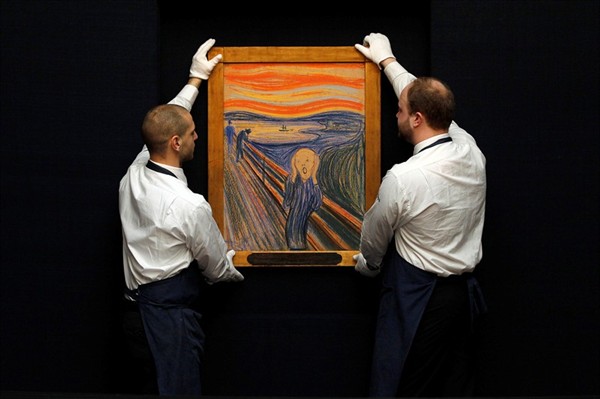 The only privately owned version of Edvard Munch’s “The Scream” set a world record Wednesday when it sold for $119.9 million at Sotheby’s in New York.

Heated competition between seven bidders took the price to the highest for a work of art at auction in just 12 minutes, sparking applause.

The previous record was held by Picasso’s Nude, Green Leaves, and Bust which sold in 2010 for $106.5 million.

“The Scream” is one of four versions of a work whose nightmarish central figure and lurid, swirling colors symbolized the existential angst and despair of the modern age.

It was sold by Norwegian Petter Olsen, whose father was a friend and supporter of the artist. He plans to establish a new museum in Norway.

The version of “The Scream” sold Wednesday was executed in 1895 and is the only one not held by Norwegian museums.

It also features a poem inscribed by Munch in which he explains his inspiration for the work, which depicts “the great scream in nature.”

“Scream’s” success means there are just three other works that have sold for more than $100 million.

One is the Picasso nude, another is Picasso’s “Boy with a Pipe” which sold for $104.1 million in 2004, and the fourth is Alberto Giacometti’s Walking Man sculpture which fetched $104.3 million in 2010.