Aurora Santika’s surreal depictions of society are indisputably grounded in truth and impossible to overlook. 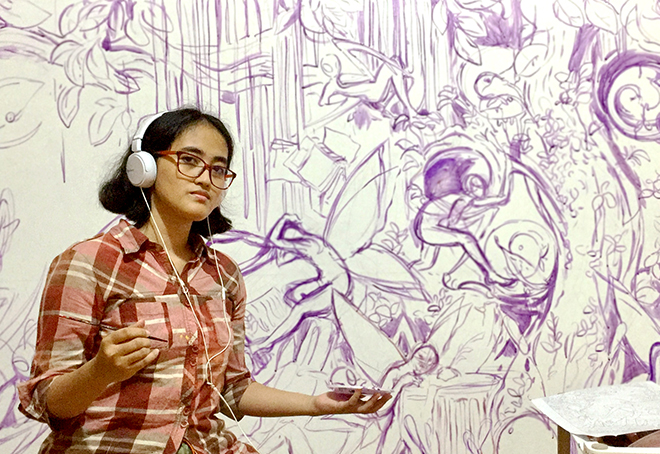 “To live as a good person is to contribute goodness to other people, as best as one’s able to.” She may not be a superhero, but Aurora Santika is most definitely not a stranger to the innumerable adversities of this world. As one of many women in her generation battling the good fight against social inequality and injustice, this young and idealistic Indonesian artist is a force to be reckoned with. Armed with a robust familial support system, the happiest of childhood memories, keen observational skills, alongside an intricate understanding and unique outlook on her surroundings, Aurora Santika’s surreal depictions are indisputably grounded in truth and impossible to overlook. 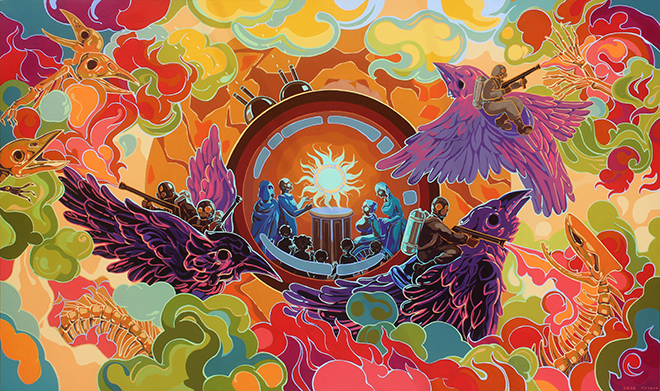 You were born in Bogor in 1996, you are now established in Yogyakarta and you have been studying Fine Arts at the Indonesian Institute of the Arts (Yogyakarta). Tell us more about your first steps as an artist?

As a child, I didn’t care about being a professional artist. I was, bluntly put, a nerd. I spent my days reading about the mystery of nature, the gallant tales in history of mankind,  the wonders of science. That’s not to say that I had no artistic inclination. My parents were lenient enough to let me fill the house with  ‘decorative crafts’ which included temporary installations in their bed and a makeshift playhouse with painted cardboards in the living room. I did paint sometimes, and I managed to win a poster design competition in my hometown during middle school, but the rest of my teenage years was mostly focused in academics.

I was in my final year of high school when I seriously considered art as a career option, to my dad’s dismay at the time. My sister and some of my parents’ friends (including the artist Hardi of Gerakan Seni Rupa Baru) helped assuring my parents enough to give me permission for applying to a Fine Art major at Indonesian Institute of the Arts Yogyakarta in 2013. Hardi’s friend, the curator Mikke Susanto, guided me in polishing my skills for the entrance exam which I then passed.

I learned a lot during my study in the Indonesian Institute of the Arts. In my second year, I joined the Tulang Rusuk community where I became acquainted with young female artists such as the Hasibuan sisters (Camelia and Reza Hasibuan), Harindarvati, Rika Ayu, and others with whom I have exhibitions together. At some point in college, I also began doing commissioned illustrations—an experience that, combined with my ever growing fondness for good novels, ballet symphonies, and comic books, was pivotal in shaping my visual style to be the way they are.

However my professional career in fine art didn’t kick into gear until my solo exhibition “Breaking Through” in 2018. The show, curated by Suwarno Wisetrotomo and held in Taman Ismail Marzuki, later opened the path for me to participate in projects such as the collaboration with Disney Indonesia in 2019, collaboration with Ferial Affif and 8 other artists for Biennale Jogja XV, and several shows with Kohesi Initiatives. 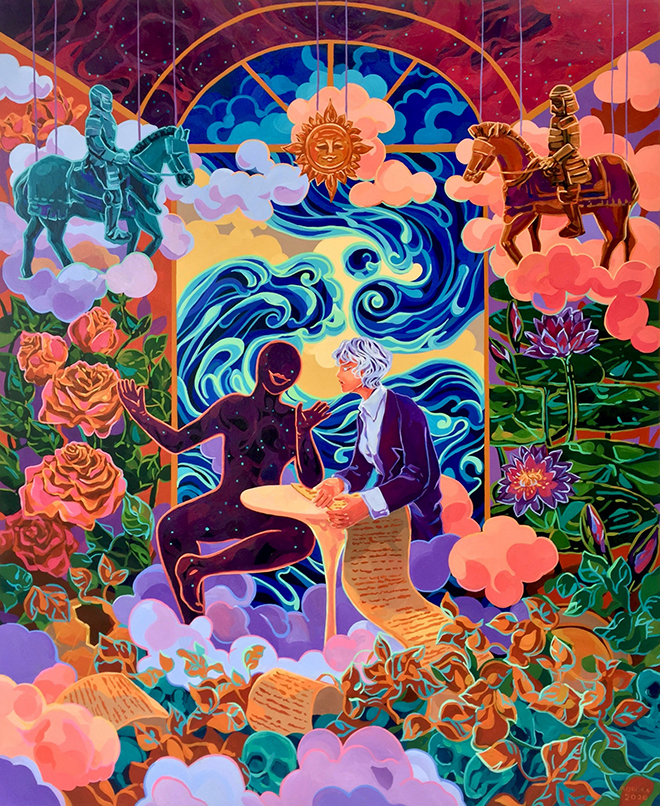 You mentioned several times across past interviews “There are many reasons why a person create an art. For me, art is a way to communicate to other people what can’t be said or written or shown in any other way”. This is a strong statement, can you elaborate further?

Art to me started out as a hobby, then a cry for help, and later a call for discussion. The last two have one thing in common: to deliver ideas that would push people into an action, whether that action is directed toward themselves, to me, or to others. If I could convey these ideas well and safely enough through everyday words or other communication mediums without them losing their intended effect, then there would be no need for me to bother creating art to begin with.

Sometimes, there are ideas that would not be well received nor had much of a good impact unless they were delivered in subtlety due to the circumstances surrounding their birth and the environment in which they were to be published. Things like sexuality, critics on ideologies, and even bits of commentaries on the socio-economic dynamic within a society (which are also related to the aforementioned subjects) are generally difficult to be brought up without adding fuel into the fire. They require delicate handling. Art, which is not only limited to visual art, but also includes all kinds of artistic mediums, is a perfect instrument for that.

On the other hand, there are ideas like personal encouragement to strive for the better that would mostly not be taken seriously unless they were delivered in a more implicit manner. As I personally experienced, sometimes it is more effective to motivate others (especially strangers) to keep going in life by having them enjoy a story of protagonists fighting adversaries rather than tapping their shoulders and saying, “Don’t give up.” 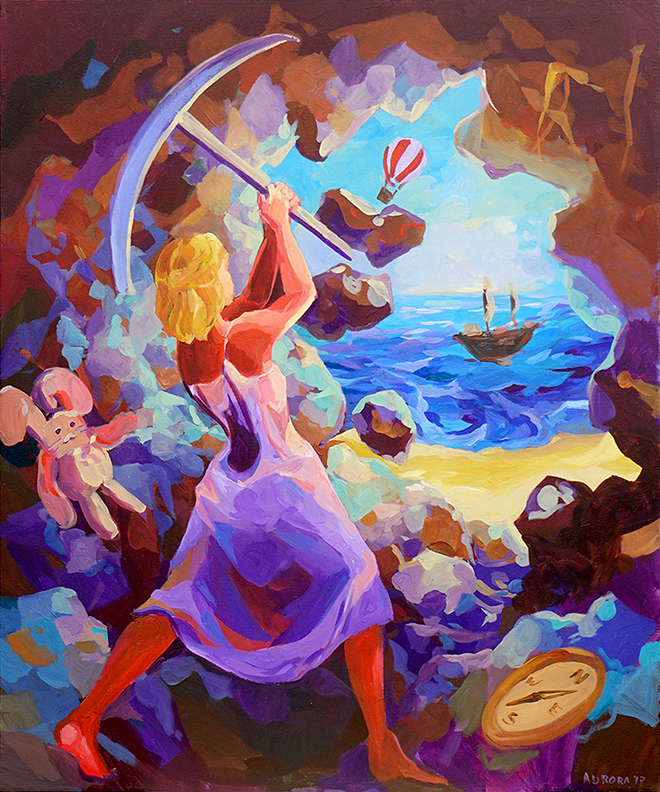 Your art tackles social issues, particularly on the women’s side (rape, prostitution, couple). Your series are delivering powerful messages. Do you consider yourself an engaged artist?

I speak from a woman’s perspective simply because I happen to be a woman, raised as an educated woman and dealing with woman-related problems. However that does not mean that I limit myself to specific topics only. While I do at times tackle issues like rape and prostitution that often involve women (and children), my main concern has always been humanity as a whole. I want to help people live a more fulfilled life by helping them be better in understanding themselves and the things that happen around them. A lot of the issues I address in my art are inspired by real life interactions with people who either act as perpetrator in said issues, fall victim to them, or are fighting their hardest to eliminate them. Whether that makes me an engaged artist or not… I think that’s for the public to decide. Childhood memories, good and bad, are at the core of many of your series. Is this reflecting your personal introspection work?

All of my works are practically born from contemplation and introspection since those are necessary in interpreting what I have observed of my surroundings, but I assume you were talking about specific works that particularly focused on childhood reminiscence. I see the majority of my childhood as happy times gone by, which is why I sometimes turn to it whenever I need to take a breather or when I simply miss my family. 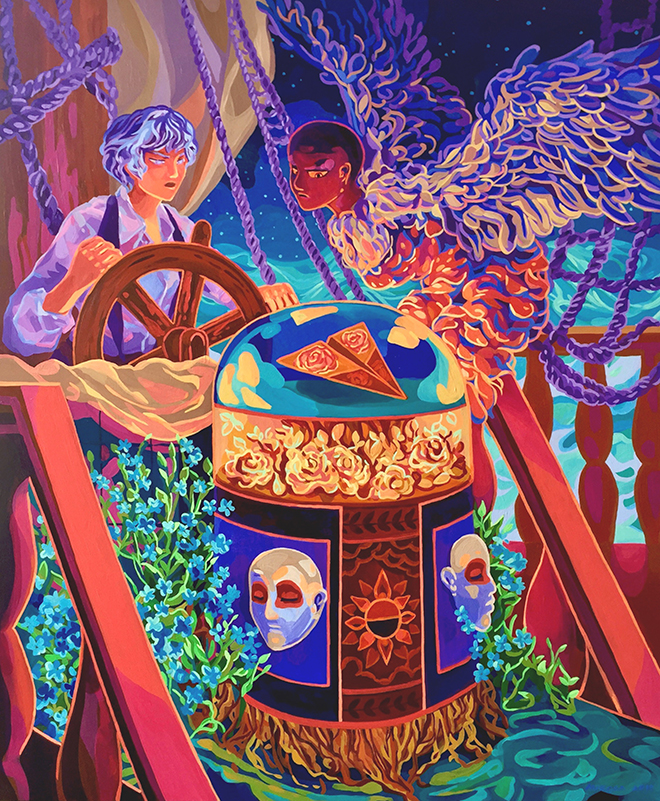 How would you define your style?

The surrealistic and romantic aspect comes from my desire to create fictional stories set in a dream-like world that parallels the reality we are living in. The pop part has more to do with technicalities, as I often derive visual inspirations from products of popular culture. 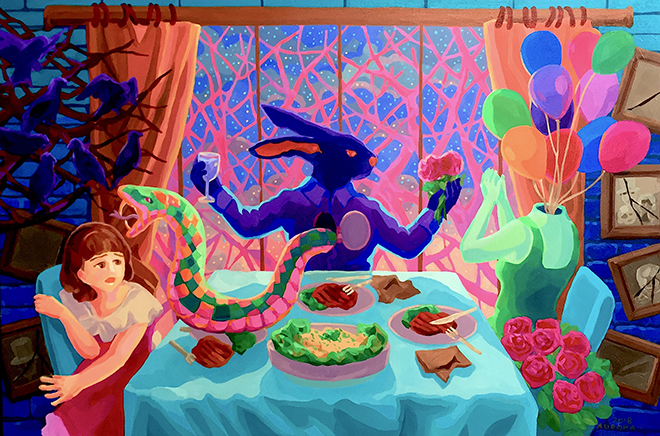 What is the role artists play in society? How do you view the current art scene in Indonesia? How important is the space given to artists in modern Indonesian society?

I believe artists as human beings have responsibilities to bring improvement to their surroundings. My mom told me, “To live as a good person is to contribute goodness to other people, as best as one’s able to.” I have seen other artists do this, whether as individual or a collective. Taring Padi actively hold protests (through art campaigns) in defense of those exploited by capitalistic endeavours. A senior artist and an acquaintance of mine, Ayu Arista Murti, recently co-founded the collective Tactic Plastic and Galastica which focused on upcycling plastic waste into a body of art. Heri Dono, an even more senior artist, wittily speaks up about problems in our society, educating his audience through unique paintings and installations that heavily borrows elements from traditional Javanese culture such as wayang. I may not be in the level of these people yet, but I’m doing my best to contribute at my own pace.

Regarding the current art scene in Indonesia, I see that there are many artists (emerging or established) and very few local galleries available to showcase them. While some artists—particularly illustrators—have taken this responsibility into their own hands to successfully promote their brand independently using social media, I still think that Indonesia needs more art-educated people with a heartfelt dedication to help artists with career management. More support (and encouragement) from the government would be great too.

Art itself has been integrated in varying degrees into the life of many Indonesians (this might have something to do with a growing number of art graduates and the economic growth in recent decades) although contemporary art at times is still seen as a privilege to those in more developed regions. Despite this, a profession as an artist is still questioned to be a real job by a lot of people and I’ve had experiences being asked, “So what do you actually do for a living?”. 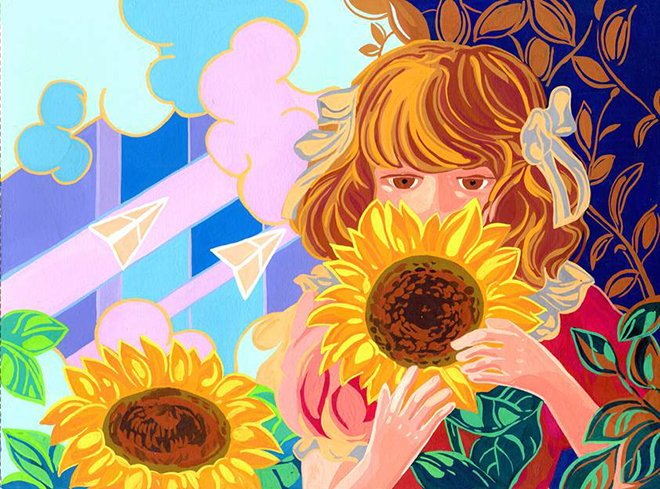 I have plans with Kohesi Initiatives in Yogyakarta. The date is still in discussion, but probably sometime within the next two years. 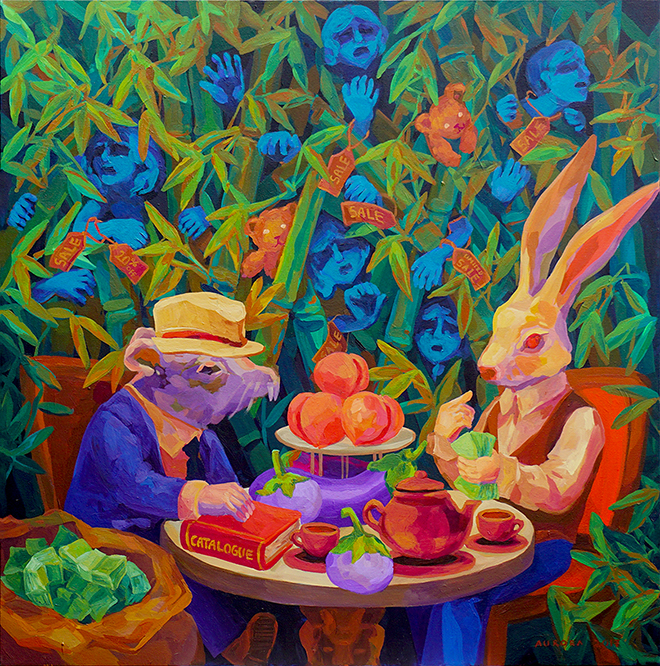 Can you let our readers know which is your favourite art museum in Indonesia?

Unfortunately I have been to galleries more often that I do to art museums. I can attest that the OHD museum in Magelang have good collections, but I’ve heard greater things about MACAN. I would love to check it out the next time I’m in Jakarta. You can check out my Instagram, and contact me should you need a thorough portfolio of available works, or visit Kohesi Initiatives’ website. For merchandises, check out Kita Art Friends’ page. (2019), Aurora Santika, “…of Crushed Dreams and a Leap of Faith”, mixed media, collaboration with Disney Indonesia for the release of Maleficent II: Mistress of Evil.

I have to mention multiple people instead of one: