The massive yellow water walkway conceived by artist Christo and his late wife Jeanne-Claude has finally opened to the public. 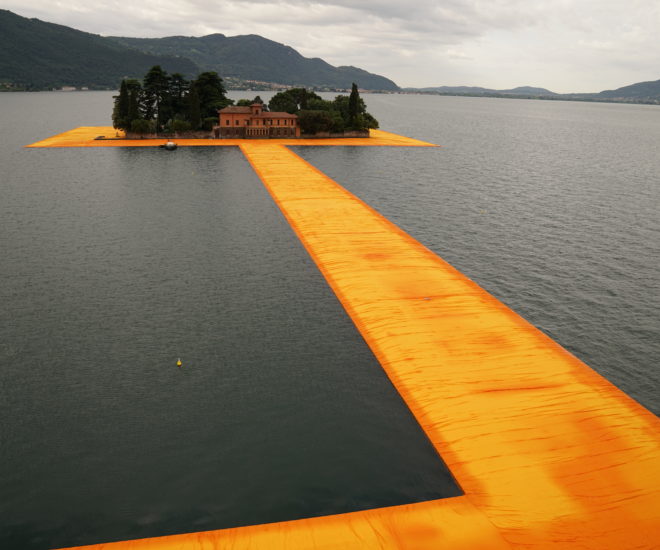 The Floating Pier installation by the artist Christo Vladimirov Javacheff (whom we’ve covered in the past over here) has finally opened to the public – it is ongoing until July 3. Anybody who wishes to know what it feels like to walk on water can head over to Lake Iseo down in Italy for a stroll on the elongated ‘yellow-brick road’ set out by the artist. You probably won’t find yourself in Oz, but it’s definitely an experience to try out.

[UPDATE] In view of visitors far exceeding the estimate originally expected, Christo’s Floating Pier may change its plans about opening day and night until July 3. With 270,000 visitors coming in less than 5 days, as opposed to the estimated 500,000 over 16 days, wear and tear was caused to the walkway. The installation was shut down for essential maintenance, and may be closed at night from midnight to six o’clock.

“It’s not a painting, it’s not a sculpture. You need to walk on it… feel it with the sun, with the rain, with the wind. It’s physical, not virtual” Christo explained. The project was originally devised by his late wife Jeanne-Claude back in 1970 for the River Plate delta in Argentina and is only coming into fruition now. The total cost was a mind-boggling $16.7 million, but it is open free for the public and is expected to attract 500,000 visitors by the time it closes. Christo loves to make works that form an entire environment onto themselves. One of his favorite tricks is to drape a certain object, whether man-made (like the Reichstag) or natural with cloth – creating a new kind of lush and grandiose texture. A major project of his, the Surrounded Islands, took this concept to an extreme when he surrounded 11 islands situated in Biscayne Bay with millions of square feet of floating pink fabric. It is a similar water-based project that he’s enacted with the Floating Pier – putting together 200,000 recyclable polyethylene cubes linked by 200,000 giant screws draped in yellow fabric.

The opening of the walkway is already looking to be one of the major cultural events of the year. In fact, local businesses are already trying to cash in on the phenomenon. One of these is Michele Pescali, a bakery owner close to the lake who created a line of “Christo biscuits” for the occasion, made of pastry covered with jam and orange peel. Fans of Christo’s work have even arrived days early so as not to miss the final stage of the installation. Almut and Walter Horstmann from Germany are two such visitors. “We wanted to see the construction work. We already saw the Reichstag, the wrapped trees in Basel, the wall of oil barrels, the Oberhausen gas holder in Germany,” said Walter, who is 75.

Even as an octogenarian, Christo still doesn’t plan to wind down. He’s already seeking approval for two projects – one in the US and the other in Abu Dhabi. When asked whether he’s planning to settle down and stop work for once, the artist simply replied: “Artists do not retire, they die”.

This story was written in-house, based on a report from the AFP and images from the same.