Asia Art Initiative (AAI) presents Wu Jian’an for Bvlgari. This collaboration between an avant-garde Chinese artist and a leading luxury house heralds the momentous commencement of Bvlgari’s new Curiosity Shop in Via dei Condotti. The opening will be held on 16 May 2018, featuring the works of the artist alongside the various curiosities both curated and created by Bvlgari. Following the trend of blurring the lines between art and fashion, but doing so distinctively without compromising on the status of the art object, AAI created a site-specific art project with Wu that would reflect the values, heritage, and objectives that Bvlgari has envisioned for the Curiosity Shop. Embracing dualities of ancient and modern, tradition and innovation, as themes for the project, the narratives of the exhibition are centred around presenting Bvlgari, as an established luxury house, to younger audiences. These themes are most palpable in two of Wu’s works: ‘Two great snakes compete for a pair of beautiful butterfly wings’ and ‘Dinosaur’. Both pieces feature the element of a snake, which is the core symbol of Bvlgari as well as Chinese tradition. However, they are mutated into butterfly forms as a metaphor of physical and spiritual evolution. By situating the works within a setting that is highly influenced by Chinese folk mythology, audiences are further invited to ponder the importance of creativity that is able to harmonise antiquity with the rapid developments of modern life. 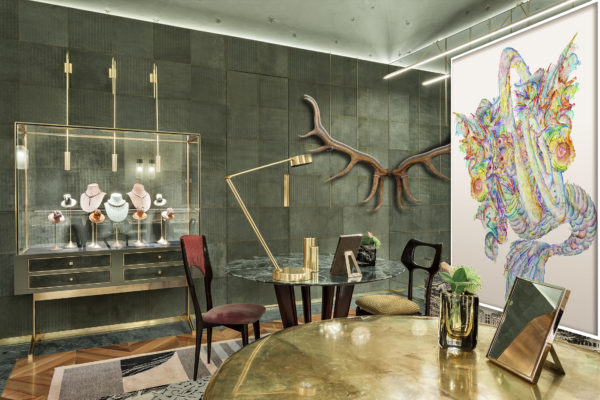 View of the Curiosity Shop with Wu Jian’an’s works.

The new Curiosity Shop is a celebration of curiosity in the style of antique cabinets de curiosité, which used to present rarities, pieces of art, and exotic and scientific finds collected from many different cultures and geographies around the globe. In this spirit, the Curiosity Shop is an amalgamation of marvellous objects that inspire new ideas, while forming the perfect muse for artists and designers around the world. It reveals Bvlgari’s expressive and experimental soul, together with its continually changing universe of objects. A series of themed rooms constitute the Shop’s interior, and includes a welcoming Tailor’s Room for active participation and personalised creations by Bvlgari, as well as a futuristic technology enclave for enhanced audience interactions with Bvlgari objects.