We take a look at the Rossinavi and how important those iconic three stripes are to the world of luxury yachting. 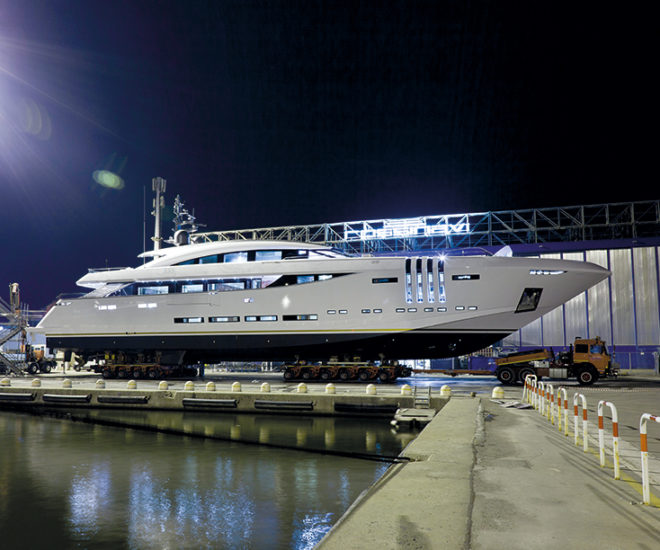 Behind the three stripes that mark the signature of Rossinavi lies the story of the Tuscan yacht manufacturer. Three simple, yet elegant lines, form the seal of this outstanding family-owned shipyard. Three pure lines that evoke the superposed decks of a yacht seen from aft. Three proud stripes that recall the tradition of seamanship as in the rank insignia of a first officer. Three lines for three generations of Rossi family members. Three peaceful lines that elicit the rising sun on the horizon, representing a rising shipyard. This is all what Rossinavi is, a proud tradition of shipbuilding, a family committed to quality and excellence, and an invitation to explore beyond the horizon. Since its foundation in 1980, Cantiere Rossi has always been a family owned and managed company; and the Rossi family is quite proud to have full control over the destiny of the shipyard, considering this as a key added value on the market. During the Eighties, Rossi built passenger vessels and also produced steel and aluminum hulls and superstructures on behalf of reputed shipyards. Slowly but surely, the Rossi family built itself a strong reputation of quality and innovation, as the company started designing and producing state of the art mechanical and hydraulic systems to handle luxury tenders and personal watercrafts on board superyachts. By 2006, the family had acquired new production sites with new offices and boardroom on the port of Viareggio. The Rossis were then determined to leave their role of subcontractors and start to compete with major yacht builders. To achieve this transformation and conquest, the new brand «Rossinavi» was created in 2007, loyal to Rossi Group’s management and philosophy based on quality, simplicity and elegance. One year later, the Rossinavi brand made its official debut with the launching of M/Y SOUTH, a 54 meter displacement motor yacht that made a statement for the Rossi family as they entered the world of custom yacht manufacturers. The second order to be honored by Rossinavi was the 70 meter M/Y NUMPTIA, designed by Spadolini and delivered in 2011. Within the following three years, Rossinavi would be commissioned and delivering five yachts ranging from 45 to 49 meters. The young and dynamic management at the helm of Rossinavi is always up to taking a new challenge and is permanently developing new projects with a team of skilled workmen for the most demanding customers. All Rossinavi yacht projects are driven by innovation, yet always respect the founding principles of the shipyard: tradition, passion for craftsmanship and high accuracy. Beyond passion, it is actually the love of yachts that strikes every single person who has the opportunity to visit the shipyard. A strong love that members of the Rossi family are keen to share with their passionate clients, which they see as ambassadors of the Rossi name across the seas of the world. In 2015, while getting M/Y Taransay ready for her launch, Rossinavi recorded orders for three new yachts to be delivered in 2017, marking an ongoing success in the field of steel and aluminum custom yacht building.

The reasons behind this commercial success don’t lie solely in Rossinavi’s marketing. It is quite the opposite in fact. What makes a future yacht owner entrust Rossinavi with the build of a new yacht is the Rossi family’s philosophy and commitment to excellence. At Rossinavi, innovation could never be taken as a synonym of improvisation. Although very keen on taking new challenges in yacht building, the Rossinavi team would always study a new project from a meticulous and attentive engineer’s point of view. The shipyard’s in-house technical department and the world acclaimed naval architects who collaborate with Rossinavi ensure the success of the new build before the first metal sheet is even laid in the yard, thanks to detailed 3-D modeling of the entire yacht, foreseeing every single technical and aesthetic detail, including what is never seen by the owner, such as piping, wiring and mechanical installations. One of Rossinavi’s strengths is its strong background in metalworking. The Rossi family started over 35 years ago in the ship building industry as skilled metalworkers and they have developed all yacht manufacturing activities from their core knowhow. As such, all metalwork, including the cutting, framing and nesting of the steel and aluminum plates is made in-house. Another exceptional feature of the yard is the «Officina Meccanica Rossinavi», a R&D center and mechanical workshop where Rossinavi is able to produce all the chandlery, mechanical and hydraulic systems, often custom, needed for the production of a yacht.

Like the most famous Dutch yacht manufacturers that are well known to our readers, Rossinavi can pride itself on being one of the very few custom yacht producers in the world with all manufacturing processes and supplies controlled in-house. This ensures a high quality end product with maximum comfort, performances, ease of maintenance and durability. Actually, at Rossinavi, all technical aspects of a yacht are treated with the same care and demands of quality as the finishing aesthetic details, so that what is never seen on a Rossinavi vessel is just as well made as what stands out to the eye of the owner and guests. A Family Business Above All Else

The first generation of Rossi yacht manufacturers is embodied by brothers Claudio (the «yacht builder») and Paride (the «metalwork genius»), who founded Cantiere Rossi, which would later become Rossinavi, in the early Eighties. They were later joined by their older brother Riccardo, rich of 25 years of experience in the ship building sector, who naturally imposed himself as the production manager / quality control manager of the shipyard.

The second generation sees Federico and Claudia, the children of Claudio Rossi, progressively taking the helm of Rossinavi; the first as acting general manager of the company, and the latter operating as marketing and communication manager. While their cousin Veronica, Paride’s daughter, works as the Service Manager of the shipyard, after moving up the ranks from secretary and learning all the specifics of yacht manufacturing and refitting. Federico and Claudia both have children who now represent the third generation of Rossi yacht manufacturers. Given the passion of the whole family for the art of shipbuilding, there is a safe bet that these children will also, someday, be part of Rossinavi’s success story. Until then, you are all invited to meet the Rossis and join this outstanding family of passionate shipbuilders to give shape to your own family’s yacht dreams.

This article was first published in Yacht Style magazine.