The latest Princess 75 motor yacht, which was previously seen at the Royal Phuket Marina in January, is featured again at Singapore Yacht Show 2017 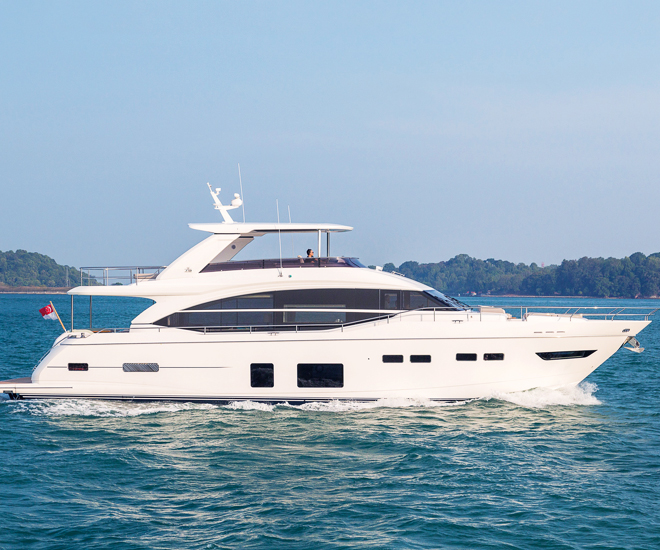 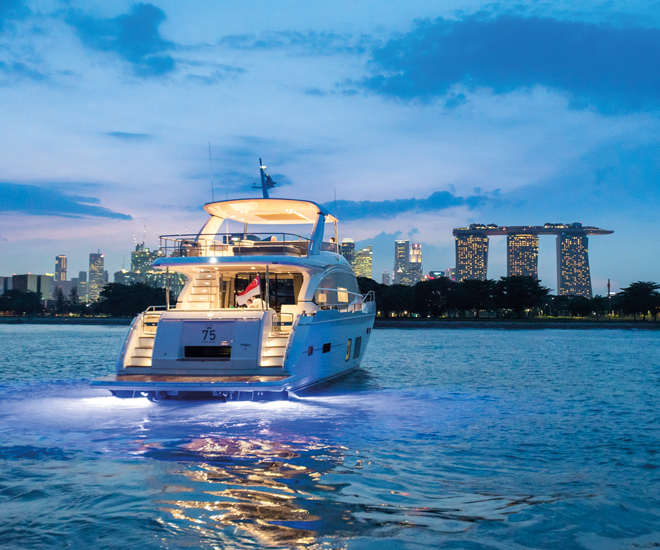 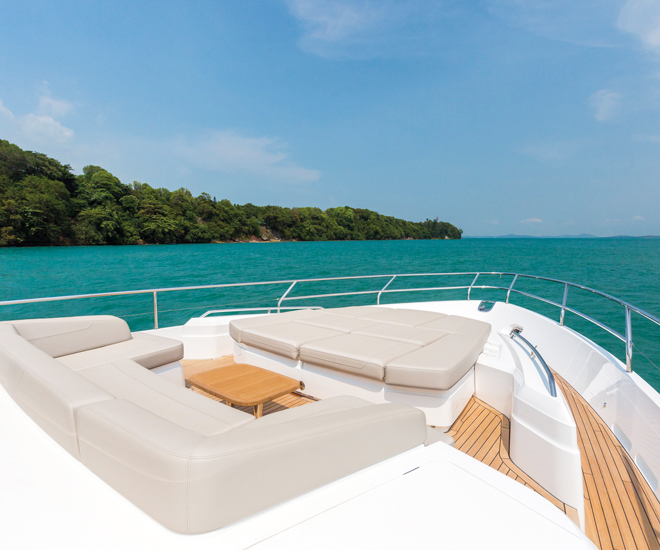 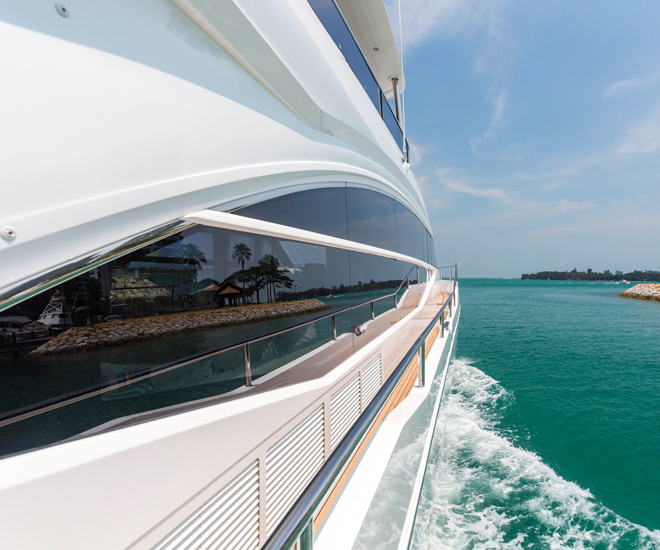 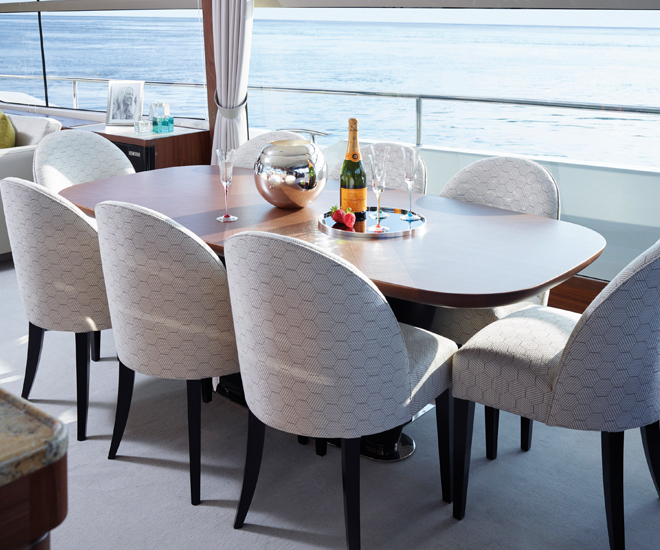 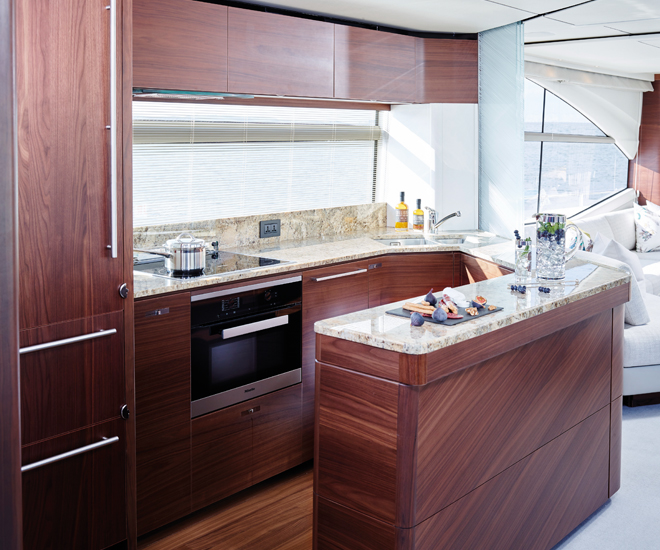 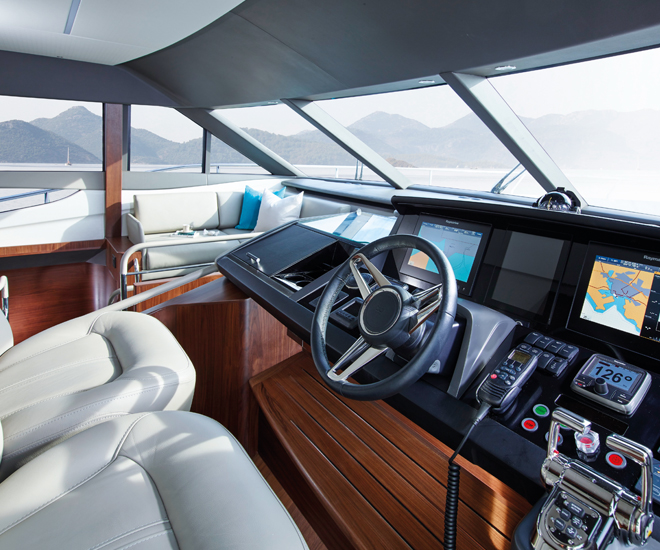 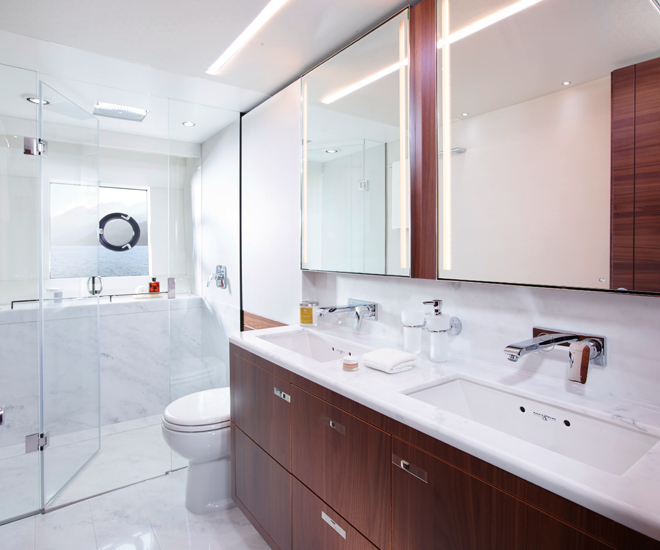 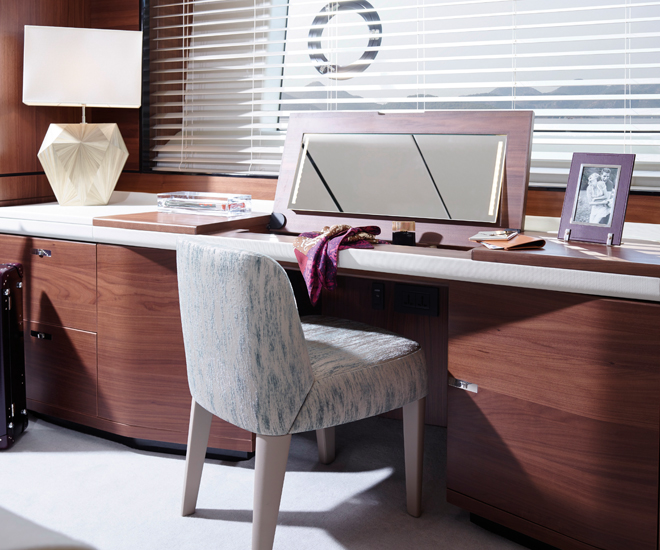 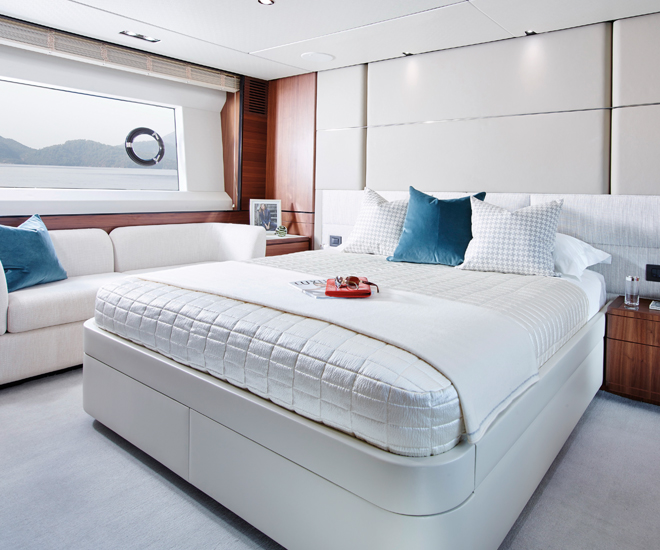 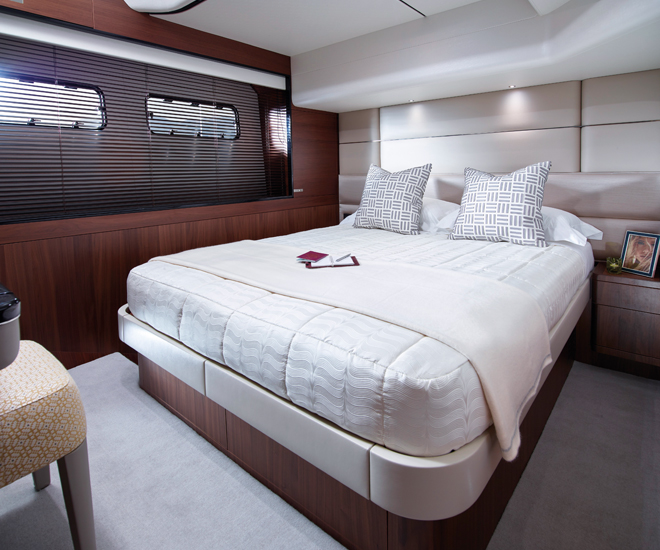 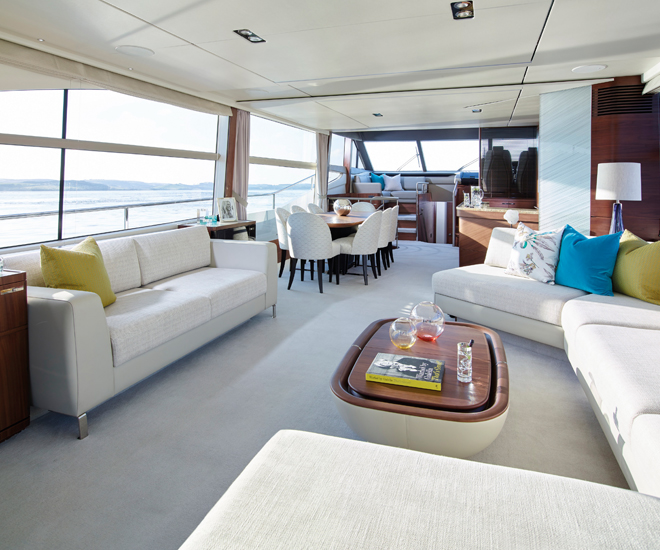 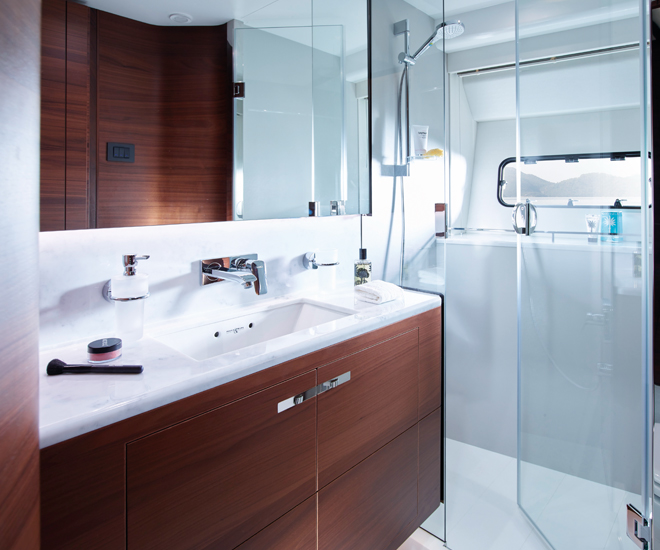 The vessel is a serious development of the highly successful Princess 72. Newly introduced is a slightly modified Olesinski deep-vee hull flattening aft to enable yet faster lift and fuel-saving planing ability, powered by her twin MAN V12 engines capable of 32 to 34 knots.

Refinements to the master suite layout, a much larger flybridge, and a wide range of other innovations and upgrades, including those spectacular wrap-around windows, are a potential pleasure for Princess aficionados and to those as yet unfamiliar with the brand. The Plymouth, England-based yard celebrated its 50th anniversary last year, and having seen off a turbulent period for some rival builders, is back at its best, unveiling another new model, the Princess 60 S-Class, at the 2017 London Boat Show a few months ago. Owned by L Capital of the LVMH group, Princess Yachts is at the forefront of luxury design and detail. More than 2,000 skilled employees ensure the highest levels of quality are achieved and every yacht exceeds their customer’s expectations.

Their model range begins with the sports style Princess V39 to V62-S in the V-Class. Then come the Princess 43 to 68 Flybridges, the also sporty Princess S60 to S72 in the S-Class, the imperious Princess 72 to 88 Motor Yachts, which have flybridges too, and finally the Princess M-Class superyachts, so far in 30, 36 and 40metre LOAs.

The Princess 75, if one looks at her specs, is actually nearly 81 feet LOA, or 80 feet subtracting the short pulpit. That’s a lot of boat, and a 19 feet beam adds to her interior volume. The twin MAN 1800 HP engines are going to give her an exciting ride capability. Options are the also popular twin Caterpillar C32s in 1622 HP or 1732 HP versions, the latter clocking 32 to 34 knots.

The award-winning yacht is in typical Princess style. It features an abundance of outdoor space for sunbathing or dining and the ability to walk through the foredeck, allowing for an ergonomic flow for everyone on board. And there will be many on board, as all your friends are going to want to be invited for a cruise. Fortunately, there’s plenty of seating on the main deck and the flybridge. The main deck’s design allows for a lot of light to be let in through the full height windows spanning the length of the cabin on the port side. This makes sitting in the saloon a delight. Up top, a crane can also be fitted to allow for easy movement of the available tender.

Inside on the lower deck, there are three guest cabins that are all en-suite. No need to share washrooms on this yacht. They can be fitted with either a double or twin beds at the push of a button. The owner’s stateroom is located amidships and has special access via a private staircase and lobby. The theme of allowing lots of light into the cabin continues here through large windows. Saying the stateroom is spacious is an understatement and it’s packed with functional features and entertainment options, including a 46-inch television. The new Princess S-Class 60 released in London is described by the yard as powerful yet elegant. It’s fast, with a top speed of up to 38 knots in Twin Man V8 1200 spec, meaning you’ll be cruising from marina to marina with exceptional ease. At almost 63 feet, the S60 is larger than her name suggests, reflecting a decision by Princess long ago to “round down” the actual LOA of its vessels rather than up. And a sleek exterior design ensures her lines match her performance credentials.

The main deck has ample space with its open plan design. The dining and galley aft make entertaining effortless. And when the weather’s nice and you want to enjoy your company outside, large sliding doors open up to a U-shaped sofa area. There’s plenty of space on the sportbridge for outdoor lounging. Wood is featured throughout, showing off the quality we’ve come to expect from the British manufacturer and owners can choose between an almost endless list of options to attain the S60 that suits their personal taste best.

Heading downstairs, up to six guests can enjoy the S60 in three cabins. The owner’s cabin is full beam and en-suite, while the other two cabins share a washroom. With that being said, there’s ample room to spend several days of relaxation on board. Princess Yachts is a British icon and one of the few great brands still manufactured in the U.K. As the Princess 75 heads down the Strait of Malacca for Singapore, be sure to check her out in April.

Among her more prestigious trophies so far, after proper onboard test drives by experienced reviewers, the Princess 75 as named “Best Flybridge over 55 ft” in the Motor Boat Awards in January, announced during a gala dinner at the Rosewood Hotel in London. The Princess V58 Open also won the “Best Sportscruiser over 45 ft” Award. Motor Boat’s Jack Haines said in a seven page report that it felt like trying out a five-star hotel, where everything was expected to be ultra-luxurious and spot on anyway, “so when you get to this size of boat, it’s the little things that make the difference, the things that make you stop and stare and coerce you into picking a particular brand over another.

He goes on to mention features highlighted by Yacht Style above, then says: “However, the real clincher of the Princess 75 is its main deck and in particular, the simply stunning salon. Rarely have I been inside a salon that so temptingly invites you to come on in, take the weight off, and relax.“The first thing you notice is the totally flat deck, which runs from the transom all the way to the companionway steps forward. Then you realise that this wonderful space is being amplified by the sheer amount of light cascading in from all sides. Take a look at the profiles of the 72 and 75, and you can see why the effect is so impressive. The windows on the 75 are truly gigantic, and even with Princess’ styling lines observed, natural light fires in from all angles”.

He is critical of some aspects, suggesting that Princess install a better wind deflector for the helmsman if using the flybridge controls. But the overalll verdict: “Here we have a boat with four stunning, spacious ensuite cabins, a spell-binding salon, huge flybridge, fantastic engine room, sumptuous design and detailing, and a barnstorming performance”. He liked it.

This article was first published in YACHT STYLE Magazine.