Amels and parent Damen company built 20 of the entries in this year’s annual Top 100 Superyachts of Asia-Pacific.

A surprising statistic, when we compiled this year’s annual Top 100 Superyachts of Asia-Pacific, is that 20 vessels are built by Amels or its parent Damen. 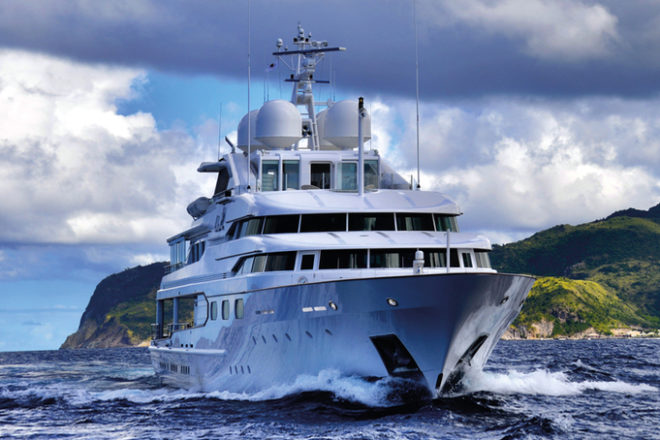 Dancing Hare, a custom Amels 188, sojourned in Sydney and the South Pacific

Bearing in mind that every superyacht had to be 48m (157ft) LOA or above to make the 2020 list, this is a phenomenal result, and it begs the question as to whether today’s owners are looking for something different in these luxury steeds.

A superyacht per se offers privacy, relaxation, status, world-class cruising and cuisine options, social and business interludes, entertainment, sea sports such as fishing, snorkelling and scuba diving, and the ability to explore our superb oceans at leisure.

On another level, superyachts are self-contained islands able to operate for increasingly longer periods without the need for shore supplies, and they can reach remote, completely isolated locations beyond the ken of even the most adventurous cruise ships.

This suggests other attributes. I once spent a week fishing with David Lieu at Scarborough Reef in the South China Sea. He was in his “little” Van Triumph, the 33m or 110-footer, before building the better-known 65m or 212ft vessel of the same name. 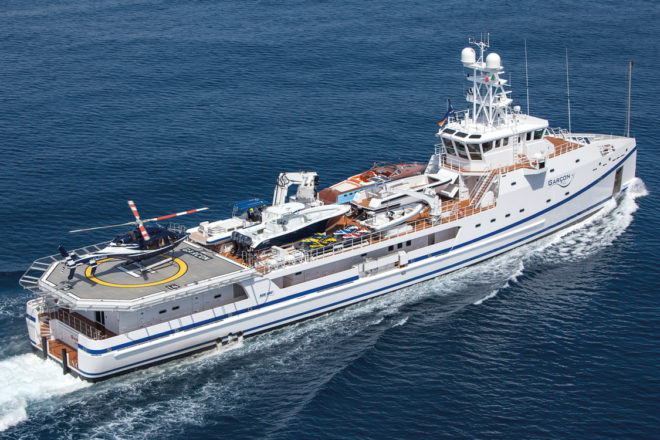 Garçon, a Damen Support Vessel, truly lives up to her name

He owned the Van Shipping Line, and his Vanguard racing yachts designed by a young Ed Dubois twice saw Hong Kong leading the premier Admiral’s Cup in the English Channel at the halfway stage, only to slip to a still-exceptional third overall after testing series-ending Fastnet Races.

Perusing brochures, books and videos during evening drinks in his lounge – we were tied alongside in the schooner Mandalay – I suddenly realised he was very concerned about the Cold War becoming a global nuclear war. If that happened, he said, he planned voyaging to the South Pacific.

Russian leader Mikhail Gorbachev’s perestroika movement ended the Cold War in 1989, but the same strategy could be applied to any calamity, such as SARS two decades ago, or to the spread of the coronavirus now.

The International Superyacht Society was formed in Florida in 1989 too, ushering in the modern superyacht era. Until then, the flamboyant American publisher Malcolm Forbes was about the only Asia-Pacific superyacht voyager in his green-hulled Feadship Highlander, with actress Elizabeth Taylor boarding in Bangkok, and he threw a talk-of-the-town party in Mirs Bay in Hong Kong. 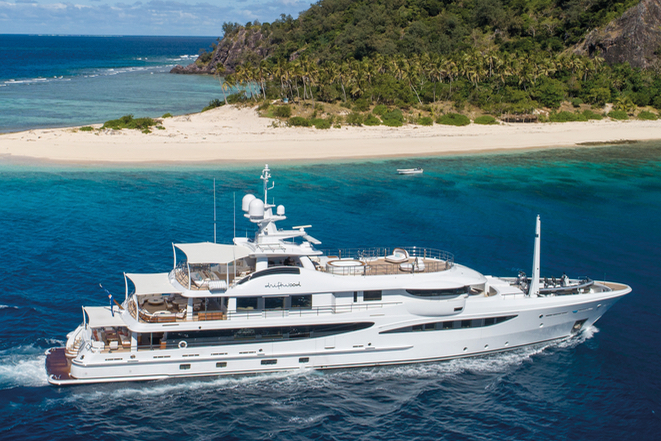 Amels 180 Driftwood cruising in Fiji; note the shading of the aft decks

Some readers may recall a younger Donald Trump turning up in Hong Kong soon after, in the 86m (282ft) Benetti Trump Princess, which was the former Kingdom and then Nabila of Saudi Arabian arms dealer Adnan Khashoggi. A few of the RHKYC ladies were invited aboard for a day cruise.

Only big Lürssens, Feadships, Benettis and super sailboats from Royal Huisman and Perini Navi ventured into Asia-Pacific waters in the last decade of the 20th century, because owners and captains felt sufficiently confident that these vessels could safely handle the seas and distances involved.

Local owners like Lieu in East Asia and then Malaysia-based Brian Chang with his first Japanese-built Asean Lady in Southeast Asia began pioneering voyages – I ran into Brian anchored in the Langkawi group well before those islands had an airport – and in 1999 the Australian media magnate Reg Grundy ordered a 76m (249ft) custom yacht called Boadicea from the Dutch yard Amels, then based at Makkum in Friesland.

Another Australian, Frank Lowy, patriarch of the Westfield shopping centres, saw Boadicea and signed up for his own custom Amels, Ilona, named after his mother. This is now an 82m (269ft) vessel following a recent refit and 8m hull extension. He and his sons have other superyachts in Asia-Pacific waters, and his wife has Shirley named for her, but Ilona, which sometimes “winters” at Marina Port Vell in Barcelona, remains a vintage member of Amels’ Asia-Pacific owned or Asia-Pacific cruising fleet. 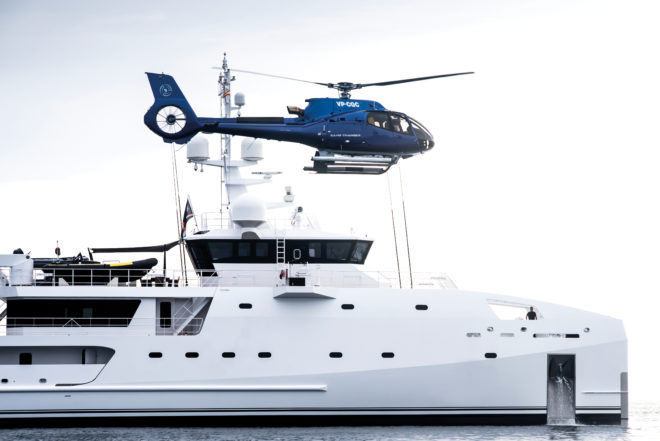 Amels in the last two decades relocated to Vlissingen near the Dutch-Belgian border, and owned by Damen, a major international shipbuilding and repair company that remains family owned, has seen startling growth.

Two innovations have helped its meteoric rise in Asia-Pacific waters and elsewhere. The first in 2004 was the introduction of what has become the wildly successful Amels Limited Editions designed by Tim Heywood, who used to partner the late London-based Australian superyacht stylist Jon Bannenberg.

The concept, made possible by Damen financing, saw the first two years of a normal four-year construction period undertaken by the yard, so that a potential owner need only wait two years for delivery during the important custom or semi-custom stages of the build. All the nitty gritty hull welding, electrics, ducting work, etc, has already taken place.

An LOA range from 180-200-206-220-242-272ft is presently offered, and Heywood often makes subtle changes or uses colours to ensure that each of these vessels has its own individual character and appeal. At Monaco Yacht Show last September, Norwegian designer Espen Øino came aboard with an Amels 60m Limited Edition, two of which have since been sold. 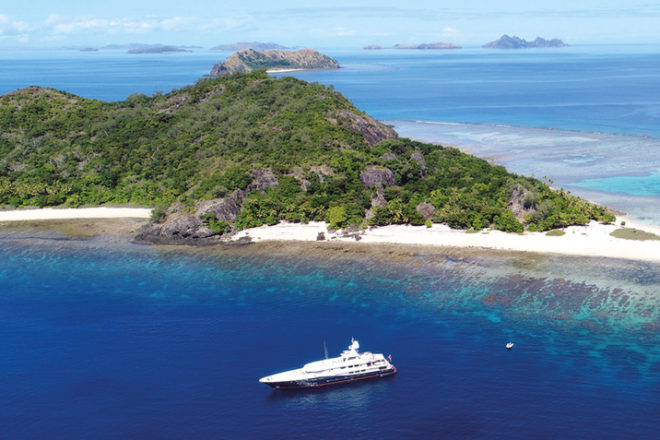 Deniki, an Amels 170, was the first Limited Edition delivered 15 years ago

The other idea in 2009 was perhaps less obvious, involving introduction of support vessels for superyachts, or Sea Axes as Damen called them. Looking a bit like explorer or expedition-style vessels, they were initially meant to sail in convoy with a mother ship, carrying all the sea toys and a helicopter, thus freeing up much space that an owner can use for other purposes. The cost comparison is in say building two 50m complementary superyachts instead of one 95m.

This set-up was attractive to owners who wished to venture further afield, and so many of these twosomes have found their way to Asia-Pacific waters. The support vessels are comfortably outfitted in their own right, and in a few cases, they have split away to carry out their own programs, often for ocean research, for which the support vessels are particularly suitable.

Does this fully explain Amels and Damen builds suddenly accounting for a substantial 20 per cent of the Asia-Pacific Top 100? 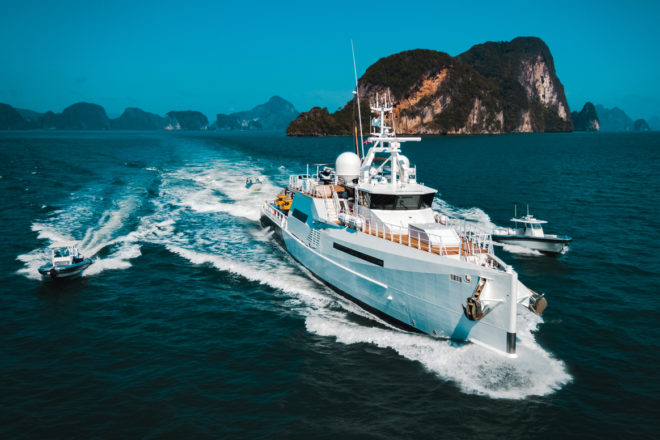 Rose Damen, Managing Director of Amels and a recent frequent visitor to Singapore Yacht Show, says: “We continue to see a marked increase in Asian sales. Many of our clients here were introduced to Amels and Damen yachts during a charter holiday with their families. They appreciated the top quality and comfort, for which Amels is renowned. Ownership offers the next level of luxury, enabling clients to make their own interior choices.

“Yacht owners across the range are increasingly choosing Asia-Pacific waters as their cruising grounds. The versatility of our offerings is a wonderful match for the diversity of this dynamic region.

“Be it a 55m or a 74m, a newly delivered or a somewhat more mature yacht, an Amels Limited Edition or a Damen Support Vessel, a desire for adventure or for the social scene, our clients from all over the world are now discovering and enjoying this region on their own terms.”

Jin Yunzhu, Amels Asia Director, says: “We are finding that many of our Limited Editions are very well received in Asia. Fast delivery is important, but I think what sets Amels apart is the quality of craftsmanship aboard. We don’t compromise, because clients are investing in a luxury product at the very highest level. Dutch yacht building has a strong tradition. Amels itself was founded in 1918, but our yard has been a site for master shipbuilding for more than seven centuries. 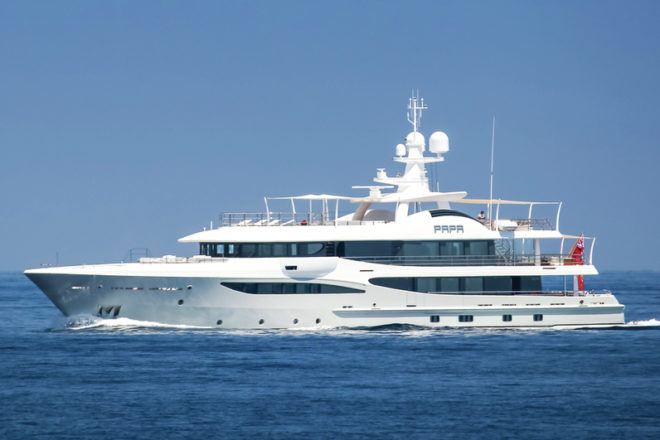 Delivered in the Med last year, Amels 180 Papa has been offered for charter from Singapore

“Papa is a great example of how successful the Limited Editions are in this region. Following her delivery in 2019, she completed her first season in the Med, and is currently cruising in Southeast Asia, where she has successfully established herself as a popular choice.

“Her enlarged sun deck, which at 180sqm is probably the largest on any 55m, is a real focus for socialising, relaxation and entertainment, with its cinema, large jacuzzi, gym and Teppanyaki Bar”.

It will be interesting to see how these varied factors and overall trends continue in future Top 100 features.