Absolute’s upcoming Navetta 64 has the option of an interior ‘Beach Club’ that can double as a cabin – with the best view on the boat.

Absolute is preparing to launch one of its most innovative models yet, with the upcoming Navetta 64 offering an optional interior ‘Beach Club’, where a sofa can convert into a double bed. 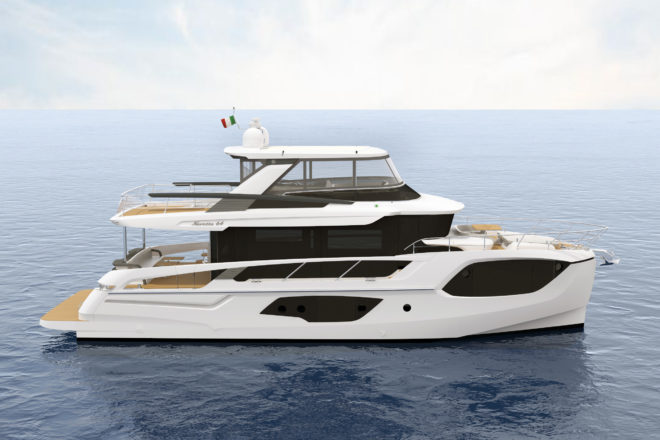 The model, which could debut at the Cannes Yachting Festival, sits between the 58 and 68 in the Navetta range. The standard version of the 64’s transom has two windows and a pantograph central door, as on other Navettas.

However, the optional ‘Beach Club’ offers a full-windowed transom, with two sliding doors flanked by two fixed doors. The sliding doors are made watertight when a button activates an inflatable gasket that expands and adheres to the metal frame.

As well as offering an uninterrupted sea view, the room has a convertible sofa-cum-bed, two wardrobes, air-conditioning, stereo, TV, fridge, head and shower. 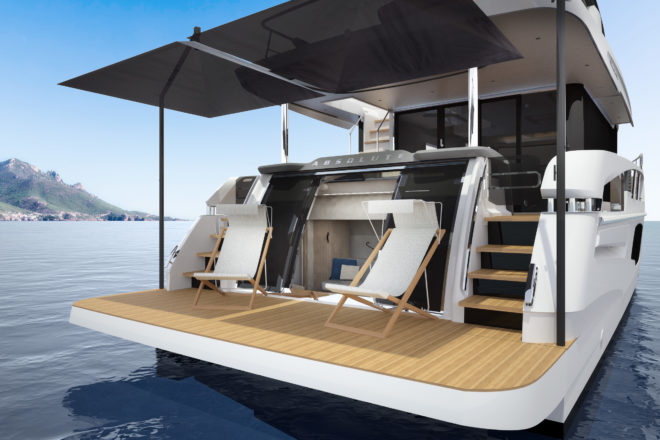 The Beach Club option on the Absolute Navetta 64

In addition to the ‘Beach Club’, there are three ensuite double cabins: a portside VIP double and starboard twin midships, and large owner’s suite forward.

Cesare Mastroianni, Absolute’s Chief Commercial Officer, said: “For the owner’s cabin, we have reiterated the solution adopted on Navetta 68 and 73. The bow position has allowed us to provide huge windows that give an incomparable view of the sea but also a quietness and absolute privacy compared to the owner’s cabins of any other 64-footer.

“The full-beam bathroom, located at the extreme bow area, is large with generous windows on both sides. At first glance, even for us it was hard to believe we were able to do it.” 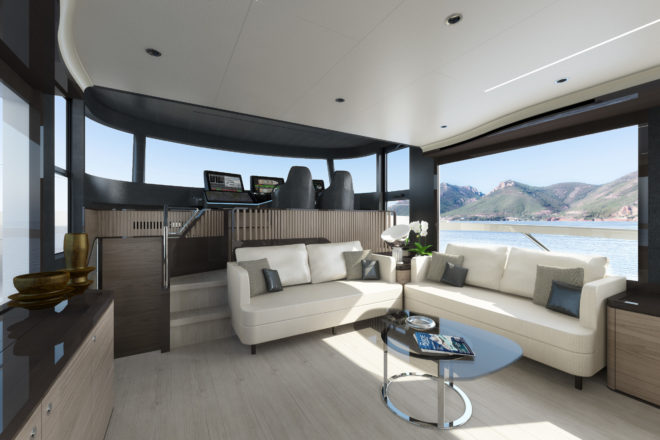 The saloon is fronted by a raised twin-seat helm station

Aft of the twin cabin on starboard side is a crew cabin with a single bed and an optional fold-out Pullman bunk.

The main deck features a conventional cockpit that leads into an interior featuring an aft galley to port, a dining table and sofa to starboard. Forward is the main lounging area, aft of the raised twin-seat helm station.

The foredeck has a forward-facing C-shaped couch, table and adjustable triple sunpad. The flybridge has a central helm seat flanked by L-shaped sofas, while in the central area, a wet bar to port is opposite an aft-facing sofa and table. This entire forward area of the flybridge can be enclosed. 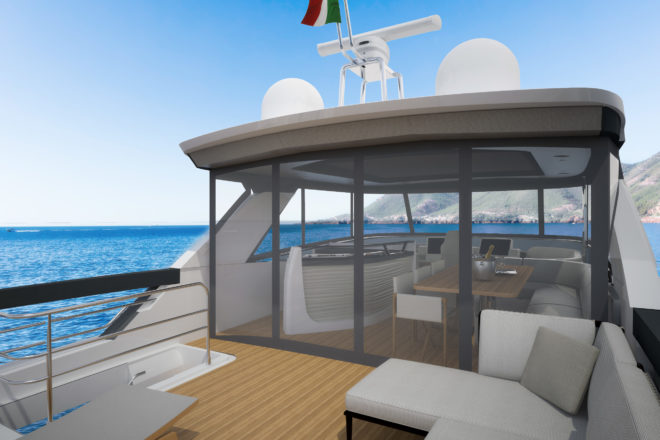 The forward part of the flybridge can be enclosed

Mastroianni added: “The side wale in the cockpit has been opened, which may seem a minor feature, but in this way, we have a floor area extension of 60cm along the entire length. When you sit in the cockpit, you have a direct view over the sea from below the railing and not above it. Great, isn’t it?”

Engine options are twin Volvo Penta D13 IPS1200s or IPS1350s. The Navetta 64 could debut at the Cannes Yachting Festival from September 8-13.

Dealer Absolute Marine, founded by Thomas Woo, revealed that an Absolute 47 Fly, a model launched at Cannes last year, is expected to arrive in Hong Kong in July, while other upcoming arrivals in the city include a Navetta 58 and a flagship Navetta 73.