LaSource: This Company Wants To Help You Find – or Even Build – The Car Of Your Dreams

Founder James Banks talks to us about his love for cars, what LaSource is all about, and where he thinks the motor car industry is heading.

Every now and then, you’ll come across a company that’ll pique your curiosity and then make you fall in love with its cause. LaSource is one such company. Founded by a man whose love for cars knows no bounds, LaSource takes motorcar brokerage to a whole new level.

Often times with brokerage, potential buyers and sellers are separated by several degrees of connections. It’s almost never a simple buyer-seller negotiation. LaSource aims to provide this process with what its sorely lacking: a personal connection. LaSource offers an exclusive membership programme that allows car enthusiasts to connect and perform seamless transactions. It also takes on bespoke commissions and restoration projects, as well as provide expert advice on buying and selling rare motor cars.

To find out more about this intriguing company, we caught up with its founder James Banks, who has spent many years in charge of McLaren’s heritage and bespoke car programme. He talks to us about his love for cars, what LaSource is all about, and where he thinks the motor car industry is heading. 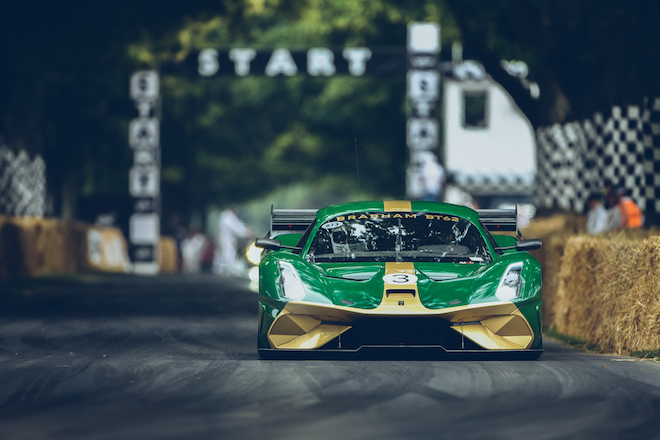 You had a successful career at British supercar manufacturer McLaren, but you decided leave the company and establish LaSource. What was your motivation?

When I was at McLaren I actually spent many years on the engineering side and moved on to manage their customer commissions within their bespoke department much later, which led me into a lot more customer-facing work. Several of the projects we developed for these clients were genuine one-off, two-off or three-off cars, and I ended up building a lot of very solid relationships with people over the years through those commissions.

Fast-forward to 2019 and I set up LaSource. I wanted to create a network between the most passionate car collectors in the world, allowing them to buy and sell directly between owner and buyer – no intermediaries. We wanted to make the whole process completely trustworthy and transparent.

The reason for that is that with the rise of Instagram, people who are passionate about motorcars can share their passion with other people online. Suddenly it’s possible for a stranger to access a billionaire car collector and build a level of rapport. “Bedroom brokers” is a term you might have heard in the past.

People will approach you saying, “I’ve got an X, Y, or Z for sale.” — almost always something extremely sought after. As the deal starts to progress, the initial claim starts to morph and before you know it, it transpires that the broker, actually knows a broker, who knows another broker who claims to be acting for the seller and you are not corresponding with the seller’s agent at all. I’ve seen extreme cases when the car evaporates along with a significant down payment made to the broker! 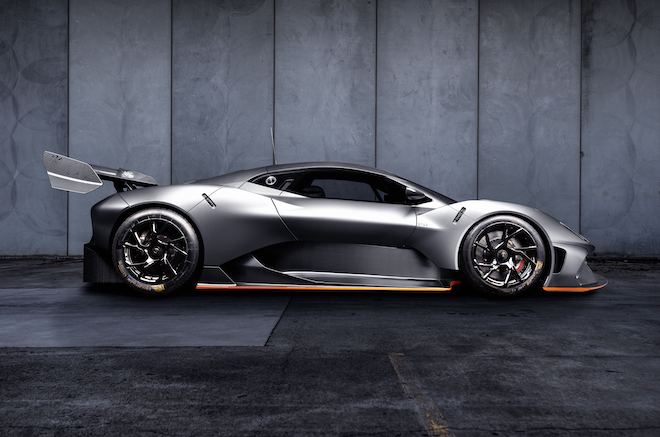 So, what exactly does LaSource offer?

There are really three things at the core of the LaSource offering. The first is the sale of iconic performance cars between private buyers and sellers at the very top end of the market, which includes the sale of build slots. In this latter case, if for whatever reason a buyer may not wish to own the car that they have a build slot for we will help them to discreetly move it on to an interested customer.

Secondly, we are the official sales agent and consultant for several manufacturers, including Brabham Automotive, CALLUM, and Gordon Murray Automotive, and classic car business Thornley Kelham. And finally, we’re your trusted partner through a bespoke build creation. Using my background as an engineer and my experience with few-off builds at McLaren, LaSource can help you to commission the car of your dreams.

How do you become a member of LaSource and what are the specific benefits attached to the membership ?

Members of LaSource must be personally known to me, or they must apply through the website. It’s extremely important to our members and the service we offer that every member is bona fide, so there will be some due diligence checks.

These full members will have access to the entire list of vehicles on LaSource, including many that are being sold ‘off-market’ i.e not available anywhere in the public domain. In essence, they have the opportunity before anyone else to buy these cars that very rarely come up for sale. Members also have the additional benefit of being able to market their cars, to a wide yet discreet audience of collectors.

LaSource provides a virtual showroom to its members. How different is it from operating a physical supercar showroom?

LaSource does not actually hold any physical stock, and it doesn’t operate at all like a physical supercar showroom. In most cases, our cars will be sold to customers on the other side of the world, so it’s not often that test drives or viewings are organised. Instead, because we’re dealing at such an elite level, there is a level of trust in the product, and in LaSource. 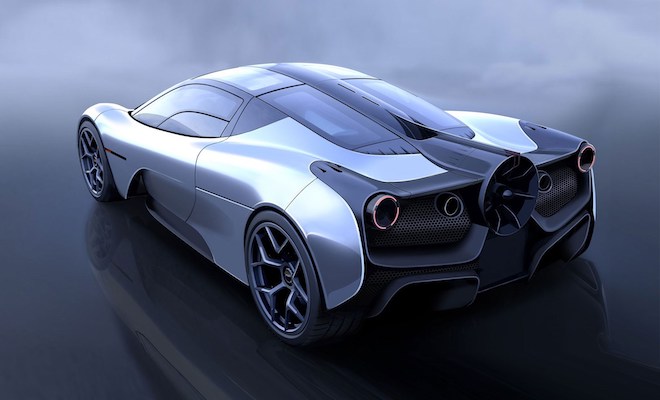 How do supercar manufacturers view your current operation ?

Several niche high-performance manufacturers approach LaSource each year looking for our help. Where a large company like Ferrari will have a network of 150 global dealers, they’ve got no issue finding buyers for their vehicles. A small company can’t justify that kind of approach, and that’s where LaSource can come in, having those relationships with the right people.

Often our services for these businesses extend into more of a consulting role, too. Currently, we’re representing CALLUM, Brabham Automotive, Gordon Murray Automotive, and Thornley Kelham. We are also working behind the scenes with several companies that are not yet ready to announce their plans publicly.

We only represent people, companies, or products we believe in and we go to great lengths to vet the company ahead of representing them. As a minimum we inspect their facilities, meet with senior management and review their business plans in some detail before recommending their products or services to our members. One thing I would say is that we’re all enthusiasts; we all share a deep passion for motor cars and I just enjoy sharing these cars with the people that are fortunate enough to be able to buy them. I’ve always said I’ve never sold a car in my life – it’s not selling if you’re just sharing a passion.

What’s your opinion about the future of electric supercars?

As an engineer, I was never quite convinced of the trend towards producing electric supercars – just by design they must be very heavy, and clearly, you lose a lot of the vibration and noise that makes performance cars such an all-encompassing thrill.

However, I very recently experienced the Pininfarina Battista on a circuit in the hands of a professional driver and I could absolutely appreciate the potential in this kind of technology. The acceleration was unlike anything else I’d ever experienced and, with each wheel controlled by its own individual motor, you can create a torque vectoring system that’s more flexible than a traditionally powered supercar.

I think the current crop of electric supercars, like the Rimac Nevera, Pininfarina Battista, and Lotus EVIJA are all very collectible vehicles, representing the very pinnacle of performance at a moment in time. Exactly like the McLaren P1, Ferrari LaFerrari, and Porsche 918 once did.

You have been dealing with bespoke supercar orders. What’s one of the most extravagant requests you have received and dealt with successfully?

Perhaps not the most extravagant, but certainly one of my proudest commissions, would have been from my time with McLaren, with the creation of the Ayrton Senna-inspired McLaren P1 GTR that became known as the ‘Beco’ car. Immediately marked out by the red and white paintwork, inspired by the McLaren MP4/4 that carried Senna to his first championship win, the Beco was modified in almost every way.

We developed new aerodynamics, overhauled the engine for a significant displacement and power boost, and included a whole host of incredible little details, mainly of which were nods to Senna’s time at McLaren. The Alcantara on the steering wheel was colour matched to the MP4/4, for example, while the engine bay was fitted with a 24-karat gold heat shield and there were Ayrton Senna quotes on the carbon tub, visible as you enter the car.

What do you make of the astonishing resurrection of Bugatti over the past 20 years?

Bugatti is such an interesting brand. Clearly, it has an impeccable heritage of motorsport, and it has produced some of the most extraordinary cars in the world, but it’s also been through so many different iterations. It essentially died out in the 1950s, before being reborn again in the late ‘80s, and then moving into VW ownership in the late ‘90s. Of course, this latter era is where we’ve seen Bugatti’s prowess in engineering, consistently building cars that set new benchmarks for speed, usability, and luxury.

But now, there is another new chapter in the Bugatti story as it merges with Croatian electric hypercar company Rimac Automobili. It’ll be extremely interesting to see how Bugatti maintains its identity, which was built around a mighty W16 quad-turbocharged engine when electrification becomes an ever greater part of its future. 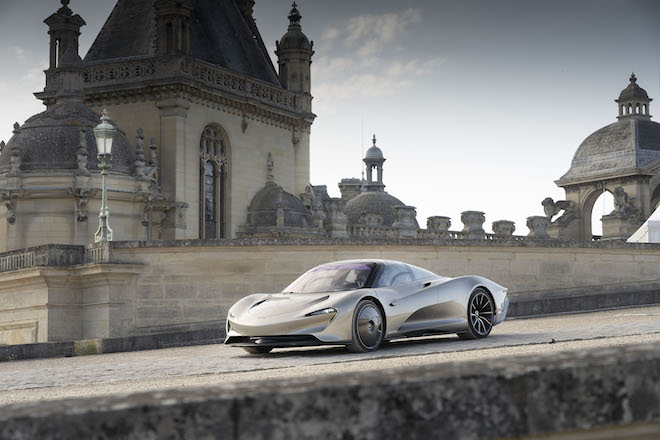 If you were to name your favorite classic car model, which one would it be?

Most car values ebb and flow with generations; sadly there’s very little interest in pre-war cars among the younger generations, for example. At the moment there is a lot of interest in the cars of the ‘80s and ‘90s, including from myself. If it counts as a classic car, I’d say my favourite would be the McLaren F1. Yes, it is almost the most expensive car you could buy at the moment but with legendary status assured, a very limited number built and demand showing no signs of waning, I’d say it has some way to go yet. It is very much the 250 GTO of Generation X, and one just recently sold out at Pebble Beach for over $20 million.

What’s your favorite car-related museum in the world?

A few years ago I was given a very special tour of the Petersen Museum in Los Angeles, and it’s been a favourite of mine ever since. The exhibits really celebrate the full breadth of the automotive culture in the most amazing way; the story of the supercar stretching right back to the D-type-based Jaguar XKSS, the evolution of Formula One told through the collection of Juan Gonzalez or a celebration of the very finest designs from Pininfarina. A number of our clients also store their vehicles in the Petersen’s ‘Vault’, which is worthy of a visit in and of itself.

If you were to name one mentor who has inspired you in your life and path to entrepreneurship, who would that be?

I’ve always admired the work and wisdom of Henry Royce. Many of your readers will know him as half of the Rolls-Royce founding partnership, and his ethos is perfectly summed up in his quote: “Whatever is rightly done, however humble, is noble.” I don’t believe in doing anything unless I’m doing it properly.