Swanky automobiles never fail to turn heads but that would not be the reason why Fabian Oefner’s photo exhibition will catch your attention. Picturing exploding vintage roadsters and sleek sports cars amid a pile of rubble, the exhibition doesn’t exactly glorify these speed machines. Rather, Oefner’s still images are meant to intrigue the human […] 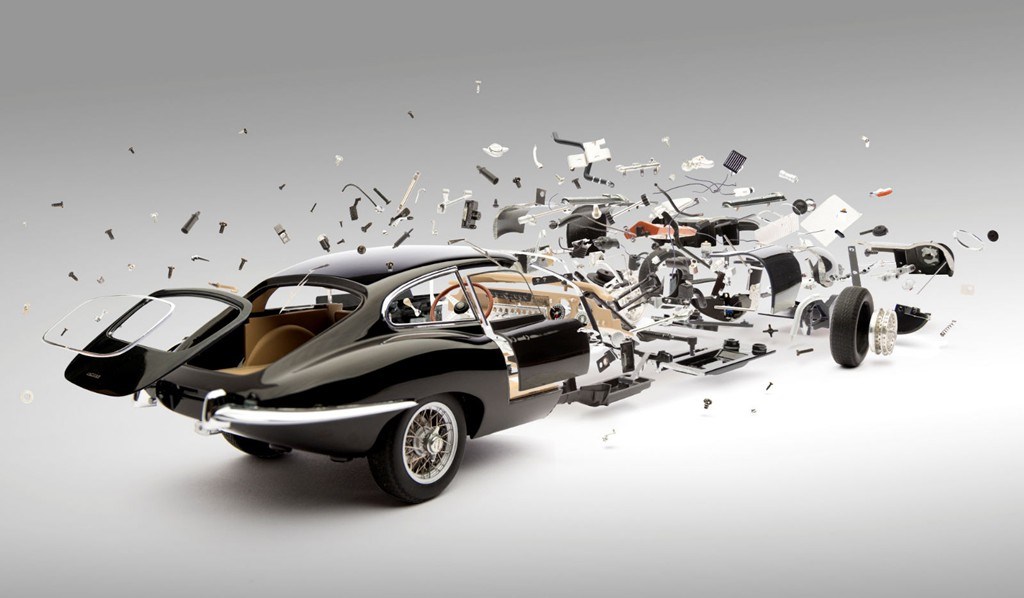 Swanky automobiles never fail to turn heads but that would not be the reason why Fabian Oefner’s photo exhibition will catch your attention. Picturing exploding vintage roadsters and sleek sports cars amid a pile of rubble, the exhibition doesn’t exactly glorify these speed machines. Rather, Oefner’s still images are meant to intrigue the human heart and mind as they fool the observer into thinking that they are merely are computer renderings.

The first part of the exhibition, named Disintegrating, comprises three images which Oefner had painstakingly created by deconstructing scale-models, and then photographing each component piece by piece in very specific positions, to create the illusion of an exploding automobile. So while the models (from a 1954 Mercedes-Benz 300 SLR Uhlenhaut Coupé to a 1961 Jaguar E-Type and a 1967 Ferrari 330 P4) weren’t exactly blown into smithereens, they had been dissected very precisely and then dangled in the air – a cruel but necessary sacrifice in the name of art. The work began as a sketch on paper where Oefner planned out where each individual piece would be placed. Then he dismantled and cut up the model into more than a thousand pieces. Each piece would be positioned individually with fine needles and string before photography proper would begin. Thousands of shots were taken in order to compose the perfect image.

Exploring the theme of ‘the birth of a car’, Hatch was inspired by the image of a hatching chick. Imagining how manufactured objects could be born like living organisms, Oefner fabricated a latex mould from the model car – a Ferrari 250 GTO – and created a ‘shell’ from a thin layer of gypsum (a calcium based sulfate mineral). Several dozens of these were made and then smashed onto the model to create the illusion of the vehicle ‘breaking out’. This step was repeated over and over again until Oefner decided the image was perfect. To capture the exact moment when shell hit model, Oefner connected a microphone to his camera, a Hasselblad H4D, and flashes, so that every time the shell hit the surface of the car, the impulse was picked up by the microphone which then triggered the flashes and the camera shutter. Fabian Oefner’s artworks will be on display at the M.A.D. Gallery in Geneva from November 27th until May 2014. Above: Fabian Oefner dismantles piece by piece every single component of a miniature car and photographs them individually at different angles to compose his art works

When did it all start? What was the trigger for your success?

When I was 14, I saw the image of Harold Edgerton with the bullet piercing an apple that fascinated me. It was taken with a camera equipment worth half a million dollars! (Edgerton invented the high speed flash at M.I.T.) Then I got my first camera, I was 15, and started investigating on how could I get such an impactful and visual effect on a low, barely existing budge

What is your motivation in doing what you do?

Finding out about what surrounds us and raise people’s curiosity

You are often called or compared to a scientist / an artist: which one do you prefer the most?

What is the satisfaction you get at the completion of an image?

The best thing I could hear is: “Your images inspire me in looking at things with a different eye.”

Check out the video below and visit the virtual M.A.D. gallery here to check out what other out-of-this-world projects our friends at MB&F are up to.

Fabian Oefner- Hatch and Disintegrating- Making of from MB&F on Vimeo.