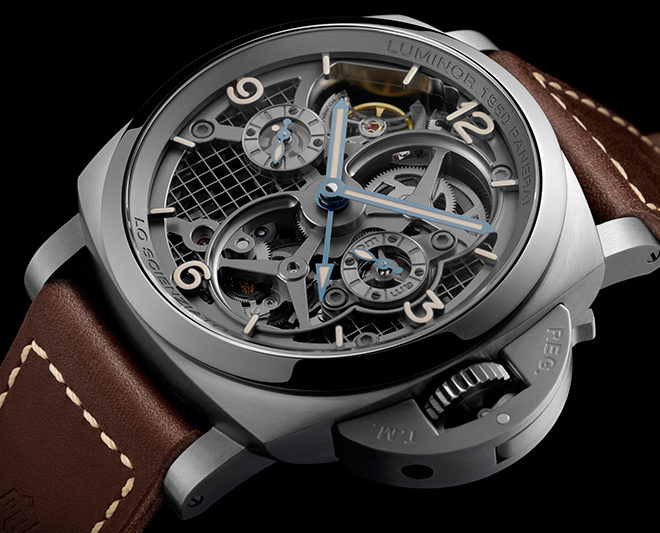 Thinking outside the box yields a world of benefits. As Panerai demonstrates, advancements in material engineering from other industries can be translated to watchmaking, especially in case making. Take 2015’s PAM616 for instance. That watch was the first to use Carbotech – a composite material normally reserved for high performance brake pads – for a case with both unique aesthetics and superlative physical properties. Now, the manufacture has unveiled a new case-making technique in the Lo Scienziato Luminor 1950 Tourbillon GMT Titanio PAM578: Direct Metal Laser Sintering (DMLS).

This method essentially 3D-prints a case by sintering powdered metal in layers with a laser. Unlike subtractive manufacturing techniques, where a case is milled out of a solid block of material, DMLS is additive – the final product is built in layers, and can thus be hollow. This, coupled with the choice of titanium, which is 40 per cent lighter than steel, made it possible to create a case weighing less than 100 grams despite its hefty 47mm diameter. None of the other properties of titanium have been compromised. The new case can still be brushed or polished, and remains corrosion resistant and hypoallergenic. As for issues of strength, Panerai has stated that the cavity within PAM578’s case was designed with a geometry that maintains the watch’s physical integrity. This idea isn’t new, as various objects from bicycle frames to aeroplane wings use the same principle for weight reduction at no expense to strength. Naturally, PAM578 underwent the same quality tests – water resistance included – as all other Panerai watches.

The idea of weight savings has been extended to the movement too. PAM578 is fitted with the P.2005/T calibre, a version of the skeletonised P.2005/S modified with titanium plates and bridges in lieu of brass, which makes it 35 per cent lighter. The rest of the movement remains unchanged, from the GMT and accompanying day/night indicator on the dial side, to the power reserve indicator on the reverse. Calibre P.2005/T also preserves its predecessor’s tourbillon, notable for making a complete revolution once every 30 seconds, and an axis of rotation that’s perpendicular and not parallel to the balance’s axis.

Of course, the movement features a long power reserve, which is the calling card of the manufacture from its days making military watches; three separate barrels arranged in series confer a power reserve of six days. PAM578 has a limited run of 150 pieces.

Text by Jamie Tan
This story first appeared in WOW.