The Chinese Zodiac is a rich source of inspiration for art, given its cyclical nature and varied subjects, from the magnificent dragon to the more worldly pig. Come 19 February, Chinese around the world will welcome the Year of the Goat. Or Sheep. Or Ram. Curiously enough, a distinction was never made on the specific […] 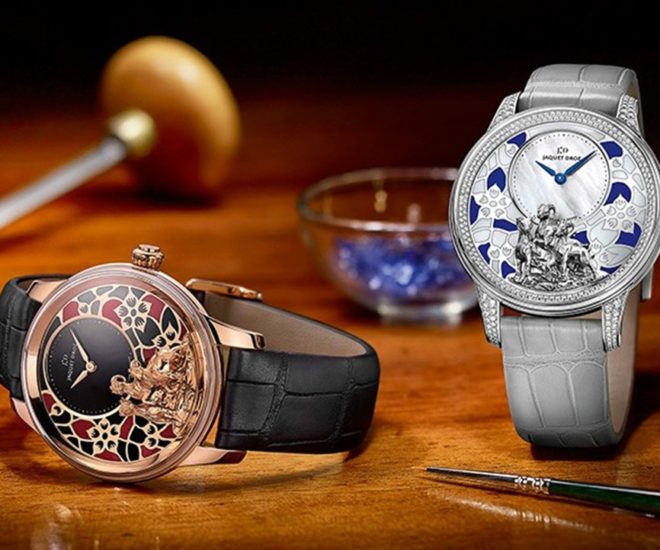 The Chinese Zodiac is a rich source of inspiration for art, given its cyclical nature and varied subjects, from the magnificent dragon to the more worldly pig. Come 19 February, Chinese around the world will welcome the Year of the Goat. Or Sheep. Or Ram. Curiously enough, a distinction was never made on the specific animal which occupies this sector of the zodiacal calendar which, as you can see below, has allowed much room for watchmakers’ interpretations. Jaquet Droz is offering two references dedicated to the goat this year. Based on its eponymous collection, the Petite Heure Minute Relief Goats comes in either a white or red gold case, and is rife with symbolism. Note, for example, the three goats which have been hard carved in relief from either red or white gold. Beyond their allusions to the Year of the Goat, their depiction on a mountain top also symbolises achievement, and the hope for success in the year ahead. The dial also contains stylised plum blossoms done in champlevé enamel. As one of the four “noble flowers” in Chinese iconography, plum blossoms flower in the winter and are seen as a herald of spring. Each reference of the Petite Heure Minute Relief Goats will come in a limited run of 28 pieces. Panerai’s Luminor 1950 Sealand 3 Days Automatic Acciaio 44mm is the seventh in the series to pay tribute to an animal of the Chinese Zodiac, beginning with the Year of the Ox in 2009. PAM848 has a decorated steel cover – a special tool called the sparsello is first used to engrave grooves into the cover, before multiple layers of gold thread are inlaid into these grooves and pounded to fill them up. Each representation of the goat is thus unique, since the process is done entirely by hand. The PAM848 contains Panerai’s in-house P.9000 calibre, fitted into the Luminor 1950 case which is 44mm wide. This boutique exclusive is limited to 100 pieces worldwide. Piaget’s Art & Excellence collection is dedicated to special pieces commemorating the Chinese New Year. Like the models before it, the Altiplano Enamelled Cloisonné Goat has a dial featuring cloisonné enamel in muted tones that fully flaunt the artist’s mastery of the medium. The enameller, Anita Porchet, has used the cloisonné technique to great effect here – note the sharp demarcation between the shadowed outline of the goat and the light shades of the sky; the two shades of vitreous enamel would have mixed during firing if the gold wires weren’t present to separate them. The watch houses Piaget’s 430P ultra-thin movement, and has an 18K white gold case set with 78 brilliant-cut diamonds totalling approximately 0.7 carats. It is sold exclusively in Piaget boutiques, and has a limited run of 38 pieces. A separate reference in pink gold is also limited to 38 pieces. Ulysse Nardin’s acquisition of dial enamelling specialist Donzé Cadrans in 2011 signalled the brand’s desire to vertically integrate this branch of metier d’art into its operations. A quick glance through the manufacture’s Classico collection will reveal just how well this decision has turned out. The latest from Ulysse Nardin, the Classico Goat, depicts a goat with two kids with champlevé enamelling. The UN-815 movement within it is COSC certified, and the watch is limited to 88 pieces. Vacheron Constantin’s Métiers d’Art The Legend of the Chinese Zodiac collection has been updated with the Year of the Goat model. The boutique exclusive comes in either pink gold or platinum, with 12 pieces in each reference. The watch uses champlevé enamelling to create a background of leaves and honeysuckles, upon which a goat engraved in relief has been set. The timepiece has no hands. Instead, four digital displays allows its wearer to read off the time, day, and date. This timepiece is certified Poinçon de Genève.